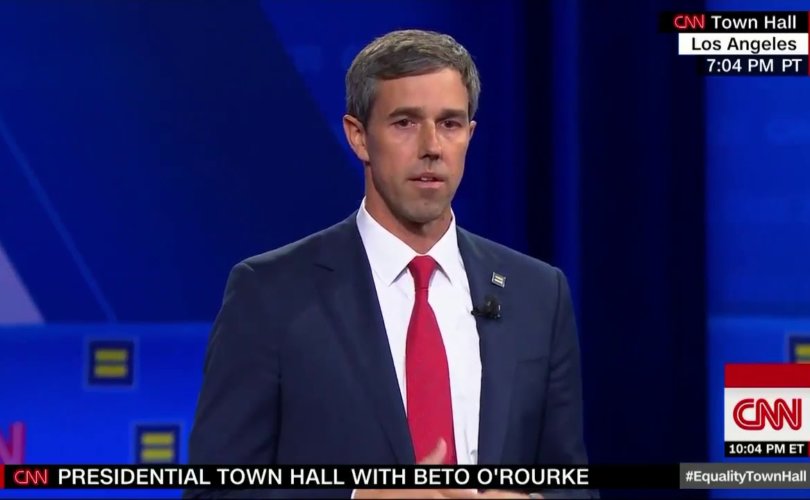 October 22, 2019 (LifeSiteNews) — Over the weekend, Democrat presidential candidate Robert Francis “Beto” O’Rourke walked back his recent threat to eliminate tax-exempt status for churches that hold to a biblical understanding of marriage, but made clear that his stance was largely unchanged by interpreting the Civil Rights Act of 1964 as requiring churches to indulge homosexuality and gender confusion.

During a CNN town hall on LGBT issues earlier this month, the former Texas state representative answered “yes” to revoking the tax-exempt status of any religious institution that “oppose[s] same sex-marriage,” declaring that “there can be no reward, no benefit, no tax break for anyone … that denies the full human rights and the full civil rights of every single one of us.”

The answer has since been repeatedly highlighted by Republicans and social conservatives, prompting O’Rourke during a Sunday appearance on MSNBC to address whether he stood by it.

“The answer to the direct question that you just asked is no,” O’Rourke said. “I see tremendous value in what religious institutions do in this country, not just for congregants and parishioners, but what they do in our communities…of course they should be able to do that work. And of course any one of us should be able to worship as we please, believe what we like.”

“But the moment that any nonprofit organization in this country offers services in the public sphere — higher education is a great example, or a health care clinic or hospital — then they must follow the laws of this country, including the law that prohibits discrimination based on any difference of race, ethnicity, gender, or sexual orientation, which is the question that I was asked at that CNN town hall,” he continued. “That is a longstanding value, and certainly since 1964 and the Civil Rights Act a longstanding law in this country.”

Title VII of the Civil Rights Act of 1964 prohibits employers from discriminating on the basis of “race, color, religion, sex, or national origin.” The U.S. Supreme Court is currently considering whether its reference to sex should be interpreted to include “sexual orientation” and “gender identity.”

“The meaning of ‘sex’ depends on the term’s public meaning in 1964, the year Congress enacted Title VII,” Alliance Defending Freedom (ADF) senior counsel John Bursch says. “There is little dispute that, in 1964, the term ‘sex’ was publicly understood, as it is now, to mean biological sex: male and female. After all, the term ‘gender identity’ wasn’t even part of the American lexicon at the time. Its first use was at a European medical conference in 1963. And no semblance of it appeared in federal law until 1990.”

Should O’Rourke’s interpretation prevail, conservatives warn that it will not merely protect homosexual or gender-confused Americans from tangible harm. Rather, it will require churches to recognize same-sex “marriages”; photographers, florists, and bakers to participate in same-sex “weddings”; employers to fund drugs and surgeries to help people imitate members of the opposite sex; and women and girls to share sleeping quarters, showers, changing areas, and restrooms with gender-confused males (or men claiming trans status to get easy access to vulnerable women).

O’Rourke, who has also defended abortion up until the moment of birth, currently ties entrepreneuer Andrew Yang for sixth place in the current Democrat primary field with 2.2% of the vote, according to RealClearPolitics’s polling average.