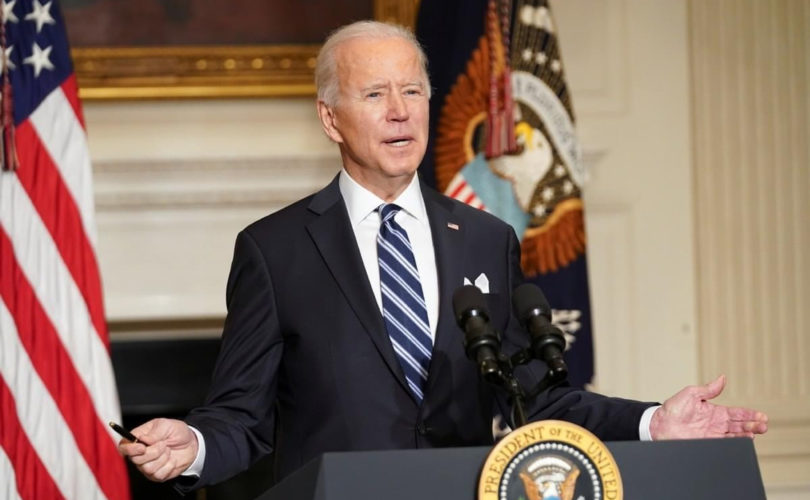 WASHINGTON, D.C., June 7, 2021 (LifeSiteNews) – The Biden family’s scandals with America’s number one adversary keep piling up. In less than five months since Inauguration Day, we’ve learned out about Hunter Biden’s ties to Chinese dictator Xi Jinping, possible Chinese espionage, and a Beijing-backed propaganda group (on top of his other business and personal scandals – some directly involving his presidential father).

During that same time, Freeh gave Joe Biden’s grandchildren a gift of $100,000, had phone calls with then-Vice President Biden, and solicited him for “future work.” FBI agents apparently kept covering for the Bidens through 2020, orchestrating a “bogus” briefing for Republicans used by the press to smear an investigation into the Biden family.

What isn’t clear is whether Freeh knew that the Romanian case implicated the Bidens’ work with a top Chinese state-backed entity.

For Hunter and Joe, Popoviciu was yet another part of a scheme entangling both of them – and those around them – with Beijing.

All roads lead to China

Hunter Biden’s work in Romania dates to at least 2015, when he was retained by Popoviciu to help the tycoon evade corruption charges. Popoviciu had been charged with bribery and “complicity in abuse of position” in 2009 for his role in an illegal sale of hundreds of acres of property by a Romanian university.

Baneasa Investments, a company owned by Popoviciu and the university, later used the land to develop a major Bucharest retail area that is home to the current U.S. Embassy in Romania, according to Romania Insider. Mark Gitenstein, previously a staffer for Joe Biden, was the U.S. ambassador to Romania when the new embassy was inaugurated in a ceremony with Hunter’s late brother, Beau.

Despite assistance from the son of the U.S. vice president, Popoviciu was convicted on his charges in 2016. As Popoviciu put together a legal team to appeal the conviction, Hunter Biden referred the case to Freeh, a board member of a foundation named for Beau. Freeh’s legal group eventually tapped former FBI agents and Ron Noble in a failed bid to get Popoviciu’s conviction overturned, according to media reports and Hunter Biden’s emails.

As with much of the Biden family’s shady business activity, Chinese ties appear to have been a key factor in Romania.

By 2017, Popoviciu’s fortunes had special import for Hunter and his father’s reported dealings with a Chinese firm, CEFC China. A business plan sent to Hunter Biden in May 2017 by associate James Gilliar highlighted the significance of the Popoviciu case and Baneasa Investments for their prospective work with CEFC, then a leading state-backed energy company.

The business plan, an investment outline for CEFC, was proposed by a group of businessmen including Hunter Biden and his uncle James, Joe’s brother. That coalition later formed SinoHawk Holdings LLC, an ill-fated joint venture negotiated with CEFC that year.

According to texts and emails between the businessmen, Joe Biden had direct involvement in the venture. Messages produced last fall by Tony Bobulinksi, former CEO of SinoHawk, show that Gilliar discussed how to “get Joe involved” around the time that Hunter received the CEFC business plan, the New York Post reported.

“Don’t mention Joe being involved, it’s only when u are face to face,” Gilliar told Bobulinksi days after he sent Hunter the plan. A bombshell message dated to May 13 further implicated the ex-vice president, detailing a proposed equity structure for SinoHawk with “10 held by H for the big guy.” Bobulinski confirmed to the Post that “the big guy” referred to Joe Biden.

The Bidens and the 'Baneasa Project'

The business plan for CEFC involved entrenching the Beijing-backed company in southeast Europe in partnership with Popoviciu. “CEFC is active in Romania through its holding KAZMunayGas and its local subsidiary Rompetrol and wishes to expand its presence in the continent and the country investing in large scale projects,” it noted.

The document added that Alltrom Group, a network of companies owned by Popoviciu, “is a major local investor with a leading position in its core business which is Real Estate development and a major candidate for becoming CEFC’s local partner through its own businesses and projects(.)” Baneasa Investments was explicitly targeted in the plan.

“An initial visit of Mr. Qingxin Ren took place on 5-6 March and preliminary discussions were held between him and Mr. Popoviciu and his associate Mr. George Argentopoulos,” it said. “A site visit took also place during this visits and was decided that AG will produce this document to facilitate further discussions among the parties.”

The purpose of the “Baneasa Project” was ultimately for CEFC “to become the biggest developer in Romania and one of the biggest in the region of SE Europe,” with 1 billion euros worth of “future development” and “1,000,000m² of residential developments.”

The project, however, required the “resolution” of Popoviciu’s legal troubles.

“Our scenario implies a resolution of the current legal dispute over parts of the project for which all owners of the Fund will seek to resolve with the Romanian State,” the business plan stressed. “If the issue with the State mentioned above is resolved the Fund’s value will double without even further developments as a result of the appreciation of land and the yield on the existing businesses.”

CEFC seems to have been receptive. “Thanks to your support to our cooperation, the consensus we made last time has been materialized in a timely manner,” CEFC chairman Ye Jianming wrote in a letter to Hunter Biden in July 2017. “Our cooperation in Oman and Romania has been productive and I am aware of the status quo.”

“Please accept my best regards to you and your family,” Ye concluded. He noted that it had been “months since we met in the U.S.”

“I would sum it up that the Biden family was doing the bidding for China on four continents,” Jack Maxey told LifeSite’s Dr. Maike Hickson about the Bidens’ work with CEFC. “This is a takedown of the West. Whether the Bidens are useful idiots or not, they are partly responsible, and they are certainly profiting from the betrayal.”

SinoHawk eventually was scuttled within months of the “big guy” email, as CEFC imploded amid a massive bribery scandal and Hunter Biden and Freeh failed to secure Popoviciu’s exoneration. Hunter nevertheless managed to squeeze millions out of people close to CEFC before the group declared bankruptcy, according to a report by the U.S. Senate last year.

The Bidens and their Chinese partners’ interests in Popoviciu’s freedom raise serious questions. For one, did Hunter Biden purposefully use top American and international law enforcement figures to benefit a firm linked to China’s communist government?

Did his vice president father’s apparent opportunities with CEFC ever impact his discussions with former FBI director Freeh? What knowledge did Freeh have, if any, of Joe Biden’s involvement in a Chinese venture implicated in the Popoviciu case?

And will we ever reach the end of the Biden corruption saga?