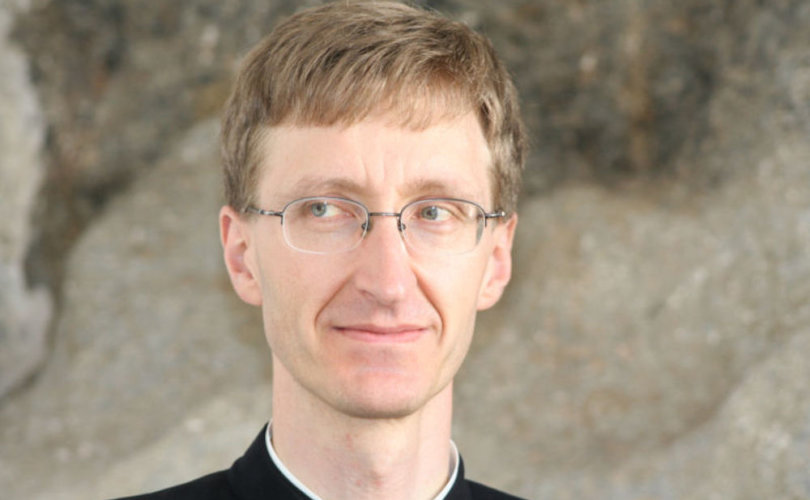 ROME, December 19, 2018 (LifeSiteNews) — Is Pope Francis’ wish to change the translation of the Our Father’s sixth petition warranted? Can a loving God still lead us into temptation?

LifeSite recently spoke with Swiss linguist and biblical scholar, Fr. Reto Nay, over the recent controversial decision of the Italian Bishops’ Conference at the request of Pope Francis, to alter the translation of the sixth petition of the Our Father: “and lead us not into temptation.”

Fr. Nay holds a doctorate in Sacred Scripture from the Pontifical Biblical Institute and has been teaching in Switzerland, Germany, Austria and Czech Republic. He is the author of a recent commentary on the Prophet Ezekiel.

In this interview with Fr. Nay, we discuss how the present vernacular translations (e.g. English, Italian, etc.) of Jesus’ words to his disciples in the Our Father came down to us, and his thoughts on the recent change to the Our Father from a linguistic and scriptural point of view.

Fr. Nay said he considers neither the ancient Latin nor the corresponding vernacular translations (e.g. Italian, English etc.) of the petition to be problematic. He also said he does not consider the new Italian text to be an accurate translation of the Gospels, nor does he consider there to be any difficulty reconciling the concept of God “leading us into temptation” with the rest of scripture (as has been claimed by those proposing the new translation).

We also discuss what the sixth petition of the Our Father really means, how a loving God can still “lead us into temptation,” and why for those who live in the Church and according to the Church, the End times are their “daily lives.”

Here is my interview with Fr. Reto Nay on the recent change to the Our Father.

LifeSite: As far as the Church knows, what were the Lord Jesus’ words in the sixth petition of the Our Father?

Fr. Reto Nay: The text of the Our Father is passed down to us in the New Testament, which was written in ancient Greek. The phrase “and lead us not into temptation” is contained both in Mt 6:13 and Lk 11:4 with identical wording: καὶ μὴ εἰσενέγκῃς ἡμᾶς εἰς πειρασμόν. This means that the wording of the petition in question cannot be blamed on a transmission error or misunderstanding.

How have the present translations in Italian and English (which are very similar), i.e. “non ci indurre in tentazione” and “lead us not into temptation,” come down to us?

The Roman Church may have used the Greek original in the beginning. But it quickly changed to Latin: “et ne nos inducas in tentationem” which is a literal translation of the Greek. So is the English version “and lead us not into temptation,” or the Italian “non ci indurre in tentazione.”

These versions are the result of translating the verb εἰσφέρω/εἰσενέγκῃς (= to lead into, to bring into) and the noun πειρασμός (= temptation, putting to proof). The original text does not offer the possibility of an alternative translation. I am not aware of any period in Church history when this translation was questioned. There is simply no grammatical or syntactical reason to do so.

In the last official translation of the Bible into Italian, approved by the Holy See in 2008, this petition of the Lord’s Prayer was changed to “and do not abandon us to temptation.” The Italian Bishops’ Conference recently voted to change it in this way also for use in the Mass. What are your thoughts about the latter change from a linguistic and spiritual point of view, keeping in mind the Christian motto, “Lex orandi, lex credendi” [the law of praying is the law of believing]? Does the new translation introduce any new ideas about who God is?

I have no idea where the “and do not abandon us to temptation” comes from. Deuteronomy 4:31 says, “Because the Lord your God is a merciful God, he will neither abandon you nor destroy you; he will not forget the covenant with your ancestors that he swore to them” (a similar reference is made in Psalm 94:14). If this is true (and it is), why then should we pray “and do not abandon us to temptation.” It also seems to insinuate that God actually could “abandon” us in temptation which comes close to blasphemy because it puts the blame on God when we abandon him. But 2 Chronicles 15:2 says, “if you abandon him, he will abandon you.”

The Italian veteran vaticanist Sandro Magister has reported that the Italian Bishops’ Conference was pressured by Pope Francis to make the change to this petition of the ‘Our Father’ (in the Mass) during their November assembly. Last year, in fact, the Pope appeared on the Italian Bishops’ Conference TV2000, saying the Italian translation “non ci indurre in tentazione” was “not good.” What are your thoughts about the Pope taking this position on an issue as important as the words with which the Lord Jesus — the Logos — taught his disciples to pray?

It was an unintended effect of the correct dogma of Papal Infallibility (1870) that the Pope was turned into a kind of oracle. The German philosopher Georg Wilhelm Friedrich Hegel (+1831) held a similar opinion about the Prussian king whom he considered the incarnation of the Weltgeist. But Saint Paul says in 2 Corinthians 1:24 that the apostles “do not lord” over the Faith. Therefore, the Pope has not received from Our Lord any competence to change the Faith or to make up his own Our Father.

The alteration of the Our Father (or of the words of consecration) gives the impression that the Pope believes that he is cleverer than the Word of God, and the theologians and saints before him. But in doing so, he undermines his own position. Why should we listen to him, if, according to this concept, the next Pope may again come up with another version?

Why do you believe Benedict XVI seemingly approved the revision to the Italian translation of the Bible in 2008 which now reads “and do not abandon us to temptation”; and yet, in chapter 5 of Jesus of Nazareth he offers a beautiful commentary on the meaning of the sixth petition “and lead us not into temptation” but without ever suggesting that the translation be changed?

The most charitable explanation seems to be that Benedict or those he delegated for the job approved a revision without examining it carefully enough.

So how should we understand “and lead us not into temptation”?

The seeming difficulty of the sentence is the understanding of “temptation” as if the Father would lead us into a temptation which He himself has created for us. However, the text does not say that God is the originator of the temptation; the devil is or men. Look at Acts 20:19 where Saint Paul speaks about “the temptations that came to me through the plots of the Jews.” In this sense, Christ is led into the wilderness by the Holy Spirit “to be tempted by the devil” (Mt 4:1). Such temptations are not surprising as “all who want to live a godly life in Christ Jesus will be persecuted” (2 Tim 3:12). Persecution is a kind of temptation. Therefore, the Our Father asks God that the temptations of the End times may be mitigated and this way we may be “delivered from evil” in the final apocalyptic battle that awaits all saints. Remember that Mt 24:22 says that “if those days had not been cut short, no one would be saved; but for the sake of the elect those days will be cut short.” This shortcut is a way through which the Father will lead us past the temptations of the end.

You speak about the petition’s reference to the End times, but how does this prayer relate to temptations in our daily lives?