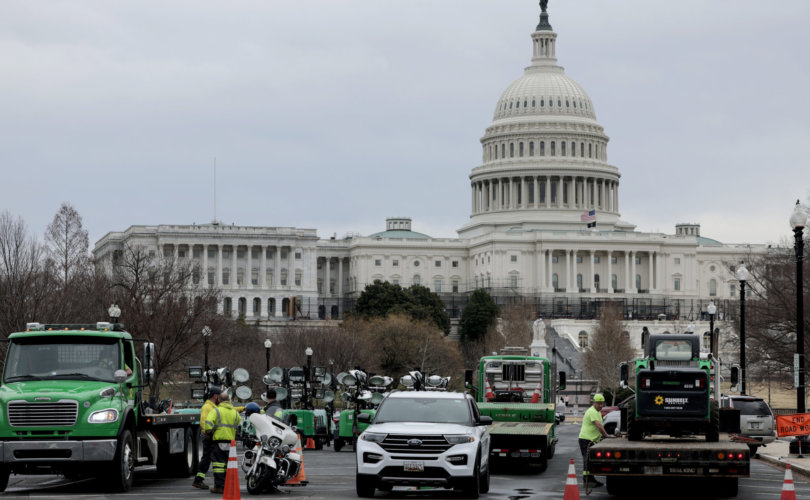 WASHINGTON (LifeSiteNews) ­— The Biden Department of Defense (DoD) approved the deployment of hundreds of National Guard troops and 50 tactical vehicles to Washington, D.C., ahead of trucker protests against COVID-19 mandates planned for the coming days.

Four hundred troops from the D.C. Guard and 300 from other states will be used to “provide support at designated traffic posts, provide command and control, and cover sustainment requirements” during trucker demonstrations around D.C., according to the DoD. Starting Saturday afternoon, “50 large tactical vehicles” will also be positioned at the traffic posts on a 24-hour basis, the Pentagon said. The approval lasts until March 7.

The DoD stated that the National Guard troops will not carry firearms or engage in law enforcement or domestic-surveillance activities.

The D.C. government and the U.S. Capitol Police requested the deployments.

“The District of Columbia and its public safety agencies are aware of and prepared for potential demonstrations that may take place in the National Capital Region in the weeks ahead,” D.C. officials said in an alert to residents Tuesday. “Layered mitigation measures are being put in place, including some that will be visible to the public and others that are not.”

Capitol Police also announced Friday that they may reinstall fencing set up around the U.S. Capitol building after the January 6 protest last year.

“The United States Capitol Police and the United States Secret Service have been closely working together to plan for the upcoming State of the Union,” Capitol Police said Friday. “The temporary inner-perimeter fence is part of those ongoing discussions and remains an option, however at this time no decision has been made.”

Inspired by Canada’s historic trucker protests, several caravans with potentially thousands of protesters are expected to converge on the D.C. area over the two weeks to protest the Biden administration’s ongoing COVID restrictions, including mask and jab mandates. Some of the convoys are timed to coincide with Joe Biden’s first State of the Union address on March 1.

Mike Landis, organizer of The People’s Convoy, in a recent video called on Biden to end the mandates and “bring back the Constitution.”

“We do not want to be under a dictatorship communism-style regime, like where we are right now,” he said.

The People’s Convoy is leaving southern California on Wednesday and said it plans to reach the D.C. Beltway area by March 5, but that it “will NOT be going into DC proper.”

In a press release, the group said that “it’s time for elected officials to work with the blue collar and white-collar workers of America and restore accountability and liberty — by lifting all mandates and ending the state of emergency — as COVID is well-in-hand now, and Americans need to get back to work in a free and unrestricted manner.”

Truckers are arriving, volunteers are organizing donations, and plans are being finalized for tomorrow’s launch of the People’s Convoy. Find out more: https://t.co/wF7IkBEYd1 pic.twitter.com/OA1b71Vh0S

Data shows that the COVID vaccines do not stop infection or transmission. “Fully vaccinated” people have dominated record spikes of COVID-19 around the world in recent weeks, accounting for overwhelming majorities of COVID infections, hospitalizations, and deaths in various countries. The shots have also been linked to serious side effects, like myocarditis, a potentially deadly form of heart inflammation that particularly impacts young men.

Several high-quality studies have also shown that mask mandates do not significantly reduce the spread of COVID-19.