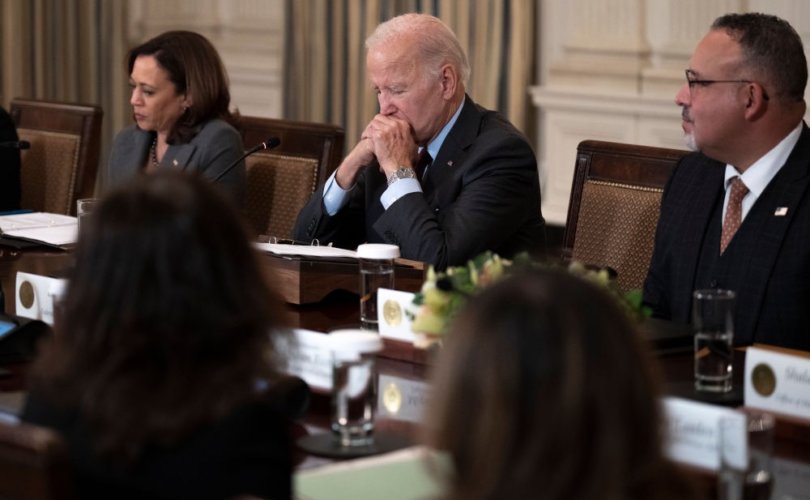 During the October 4 meeting with the so-called Reproductive Rights Task Force, U.S. President Joe Biden and Vice President Kamala Harris met with administration officials to discuss the pro-life legislation enacted throughout the country since the reversal of Roe and announce new federal guidance and funding to promote abortion.

Tune in as Vice President Harris and I attend the second meeting of the Task Force on Reproductive Healthcare Access and deliver remarks. https://t.co/Jwi0n9kPT4

Federal initiatives aimed at broadening abortion access nationwide include a $6 million grant allocated by the U.S. Department of Health and Human Services (HHS).

Biden administration Education Secretary Miguel Cardona also announced that the Department of Education (DOE) has sent guidance reminding U.S. universities that they must “protect their students from discrimination on the basis of pregnancy, including pregnancy termination” under Title IX.

During his remarks, Cardona claimed that abortion is necessary for the success of American students.

Slamming the University of Idaho for last week shutting down birth control access and telling employees they cannot promote abortions under state law, Cardona claimed that access to abortion “is critical to the wellbeing and success of our nation’s students” and that students need abortion “to thrive in school and in life.”

Echoing Cardona’s sentiments, Biden urged colleges and universities not to cut back on abortion or contraception availability.

“My message to any other colleges considering enacting policies like this: Don’t. Please don’t,” he said.

“Folks, what century are we in? What are we doing? I respect everyone’s view on this, personal decisions they make, but my Lord, we’re talking about contraception here,” Biden, a self-professed Catholic, said. “It shouldn’t be that controversial, but this is what it looks like when you start to take away the right of privacy.”

Harris, meanwhile, condemned “extremist” pro-life politicians for allegedly “attacking the freedom and liberty of millions of women at a state level” by passing legislation banning abortion.

Pro-life conservatives have been split over the wisdom of Graham’s controversial proposal, which came just under two months before the November midterm elections. Democrats have seized upon the proposed legislation to rally their pro-abortion base to fight a Republican takeover of Congress.

Calling on voters to support pro-abortion candidates in the November midterms, Biden said the “only way [that pro-abortion legislation is] going to happen is if the American people make it happen.”

So far, 14 states have moved to ban abortion since the Supreme Court’s June decision, and others have enacted other restrictions aimed at limiting abortion within state borders. Democrat-led states like California and New York, meanwhile, have moved in the opposite direction, working to promote and expand abortion access and actively invite abortion-seeking women from pro-life states to travel to kill their preborn babies.