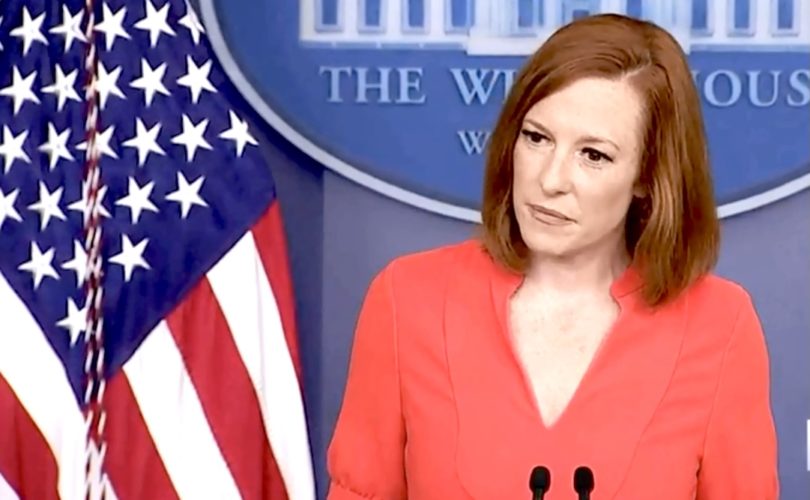 The comments came in the course of the Biden administration condemning Alabama for passing legislation that would prohibit the prescription of puberty blockers and prohibit pediatric “surgeries that sterilize, including [a] castration, vasectomy, hysterectomy, oophorectomy, orchiectomy, and penectomy”; as well as procedures that “artificially construct tissue with the appearance of genitalia that differs from the individual’s sex, including metoidioplasty, phalloplasty, and vaginoplasty.”

“To be clear, every major medical association agrees that gender-affirming health care for transgender kids is the best practice and potentially life-saving,” Psaki claimed.

In fact, the evidence indicates the Biden approach is far from “life-saving.”

A range of scientific literature indicates that while reinforcing gender confusion may give a patient short-term satisfaction, over the long term it often fails to prevent, or actually exacerbates, significant emotional harm up to and including attempted suicide (with or without surgery), because fixating on “gender affirmation” tends to distract from exploring other issues that may be the actual root of a patient’s mental or emotional unrest.

Medscape recently covered a forum giving voice to firsthand accounts affirming the above from “detransitioners” around the world who shared the pain and regret that often follows child “gender reassignment,” as well as the biases, blind spots, and negligence on these points from the medical establishment, cutting against Psaki’s invocation of “every major medical association.”

To the contrary, one of the participants, “ex-transgender” Michelle Alleva, argued that the need for strong evidence supporting a favored course is now disregarded in the name of a cultural agenda.

Alleva contends that pro-transition studies often suffer from failure to follow-up with patients over a long-enough period of time, and that transition regret is difficult to track because of the number of regretful patients who do not follow-up with their doctors. She also argues that “informed consent” for transition treatments cannot be satisfied without a thorough mental evaluation of a patient, not to mention the unknown variables of the therapies themselves.

Writing in the Daily Wire, board-certified child, adolescent and adult psychiatrist and author Miriam Grossman noted that many medical authorities are actually more cautious on the subject than the White House suggests.

She quoted the American Psychological Association as admitting that “because no approach to working with children has been adequately, empirically validated, consensus does not exist regarding best practice with pre-pubertal children”; the United Kingdom’s National Institute for Health and Care Excellence “potential benefits [of puberty blockers and cross-sex hormones] are of very low certainty”; and British Medical Journal editor-in-chief, Professor Carl Heneghan, as concluding that the “quality of evidence in this area [puberty blockers] is terrible.”

At a time when even “socially progressive and LGBT friendly countries” like England, Finland, and Sweden have “applied the brakes” on these procedures, the “White House is promoting nothing less than a reckless experiment on children,” Grossman warned. “For this man-made catastrophe, young Americans and their families are paying and will continue to pay a terrible price.”