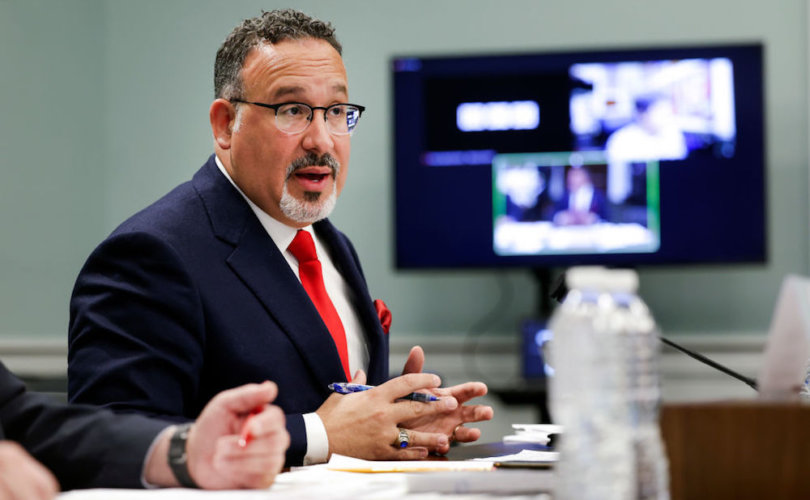 WASHINGTON, D.C. (LifeSiteNews) – Conservatives are declaring victory after the Biden administration announced it is delaying the implementation of new rules reinterpreting Title IX, the longstanding set of rules against sex discrimination in public education, to accommodate transgender ideology.

Last year, the U.S. Department of Education announced that its Office for Civil Rights (OCR) interprets Title IX’s prohibition on “sex discrimination” to also cover “sexual orientation and gender identity,” and will “fully enforce” this interpretation “in education programs and activities that receive Federal financial assistance from the Department.”

The rules were expected to release in April, but Just the News reported last week that they have been delayed until an unspecified date in May.

“We are working on the new rules and we’re expecting next month that they are released, in May,” Education Secretary Miguel Cardona told the House Appropriations Committee hearing Thursday.

“This regulatory process raises important and complex issues that require careful consideration as well as the urgent need for action,” a DOE spokesperson subsequently told Politico, claiming the delay would “ensure that the Department is able to devote thoughtful and appropriate attention to these issues.”

Heritage Foundation legal fellow and former Trump administration education attorney Sarah Parshall Perry attributed the delay to pushback from social conservatives, while stressing that the “administration would never let on we’ve had an impact.” That pushback included public criticism from members of Congress and women’s groups, as well as a discharge petition to bring to the House floor legislation to target the federal funding of any school that forces female athletes to compete against gender-confused males.

The secretary of #education has delayed the new rule on #TitleIX —proof positive that if you rattle your sabers loud enough even the bureaucrats on the mountain have to listen.
We won’t accept gender identity as a stand in for biological #womanhood.
Period.

That’s not to say the Biden administration has given up on the rule entirely, however, or that it’s about to moderate its position on the transgender agenda, from male participation in female athletics, to male use of female restrooms, to surgical and chemical “transitioning” of children.

The administration’s stance is summarized in a March 2022 “Transgender Day of Visibility” proclamation, in which President Joe Biden “celebrate[d] the activism and determination that have fueled the fight for transgender equality,” and derided an “onslaught” of state legislation to keep sexual proselytizing out of elementary school, protect children from physical mutilation and chemical castration, and ensure female athletes don’t have to compete with males in sex-specific competitions as “undermin[ing transgender] humanity and corrod[ing] our Nation’s values.”