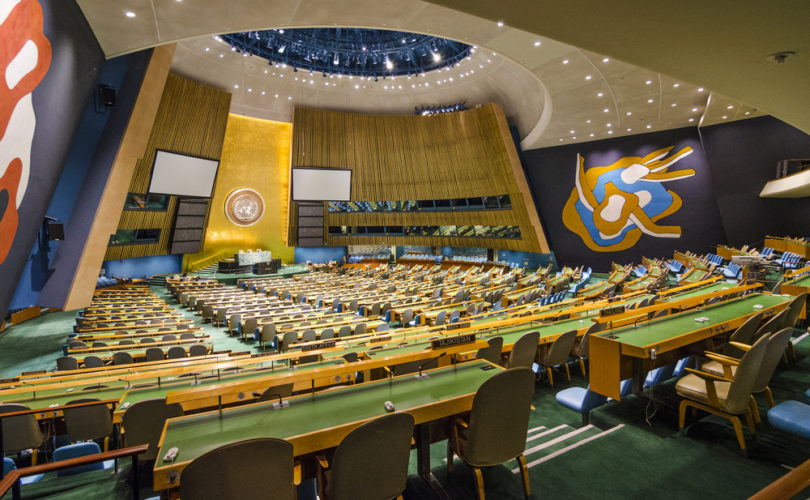 NEW YORK (LifeSiteNews) – Pro-abortion forces at the United Nations are attempting to pressure the UN’s General Assembly to affirming a right to abortion in the wake of the U.S. Supreme Court bringing about a sea change on the issue in America.

The Center for Family & Human Rights (C-FAM) reported that the effort, backed by the Biden administration and the European Union (EU), would call on the governments of the world to endorse “access to safe abortion” in places “where such services are permitted by law,” as a means of “ensur[ing] the promotion and protection of the human rights of all women and their sexual and reproductive health.”

If their efforts are successful, the language would be adopted by the end of August.

The language has been proposed multiple times in the past without success, C-FAM noted, but its backers are reportedly being particularly aggressive in negotiations, despite the objections of pro-life nations.

“Insiders close to the negotiations told the Friday Fax that not a single paragraph of the entire resolution was agreed by consensus before the draft was tabled this week, departing from the long-standing diplomatic procedure followed in General Assembly negotiations,” the group reported. “Fifteen countries tried to block the resolution from being tabled as a result, to no avail.”

“Delegations not only objected to the language about abortion in the resolution,” C-FAM added, “but they also expressed concerns about language and terms that could be used to support policies that promote homosexuality and transgenderism under the pretense of addressing sexual violence, of which women are predominantly victims.”

The so-called international community’s hostility to the right to life and those who recognize it is nothing new. Last year, the UN barred pro-life non-government organizations such as Campaign Life Coalition (CLC) from participating in the international body’s Commission on the Status of Women (CSW).

The Biden administration’s support for such pro-abortion efforts is a stark departure from the Trump administration’s leading role in rejecting abortion as a human right. In 2019, former Secretary of State Mike Pompeo attempted to create a new counterweight to the abortion “rights” narrative with the formation of a Commission on Unalienable Rights, which would “provide the Intellectual grist of what I hope will be one of the most profound re-examinations of inalienable rights in the world since the 1948 Universal Declaration (on Human Rights at the United Nations).”

The panel, which President Joe Biden disbanded within months of taking office, was tasked with offering “fresh thinking about human rights discourse where such discourse has departed from our nation’s founding principles of natural law and natural rights.”