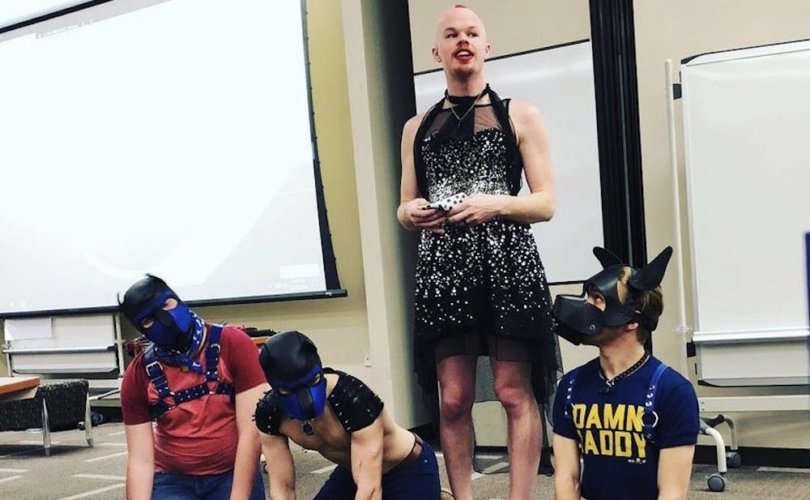 WASHINGTON, D.C. (LifeSiteNews) – A new Biden administration hire tasked with the disposition of nuclear waste is drawing attention for a controversial background that has nothing to do with energy issues.

Politico reported that Sam Brinton has been chosen as deputy assistant secretary of Spent Fuel and Waste Disposition for the U.S. Department of Energy’s (DOE) Office of Nuclear Energy (ONE).

I’ll even be (to my knowledge) the first gender fluid person in federal government leadership. But most importantly, I am going to be responsible for finding solutions to a problem I have dedicated my life to that has been stymied for decades.

According to a biography Brinton provided to the LGBTQ Religious Archives Network (LGBTQ-RAN), he holds a dual Master’s degree from MIT in engineering systems and nuclear science and engineering, is the founder of “Core Solutions Consulting that provides technical expertise on topics ranging from nuclear waste management to advanced nuclear reactor innovation and nuclear non-proliferation policy to advanced nuclear companies,” and has advised Congress on related issues.

However, the biography also details Brinton’s work as an adviser to the Obama administration on LGBT issues and an activist for campaigns to ban talk therapy for unwanted same-sex attraction, such as the BornPerfect Campaign and 50 Bills 50 States, ostensibly driven by his experience as a “survivor of a traumatic and torturous conversion therapy experience.”

“He shows young men and women everywhere he goes that they can be who they are and gives them courage,” the bio reads. “Once, while he was walking around Disney World in 6 inch stilettos with his boyfriend, a young gay boy saw Sam with his boyfriend and started crying. He told his mother, ‘t’s [sic] true, Mom. WE can be our own princess here.’”

This is Sam Brinton – a drag queen and LGBTQ+ activist who was just hired to a top level position at the DOE. pic.twitter.com/2zN8s2iMUK

“One of the hardest things about being a handler is that I’ve honestly had people ask, ‘Wait, you have sex with animals?’” Britton says. “They believe it’s abusive, that it’s taking advantage of someone who may not be acting up to a level of human responsibility…. The other misperception is that I have some really messed up background, like, did I have some horrible childhood trauma that made me like to have sex with animals.”

In an interview with the Ruth Institute’s Dr. Jennifer Roback Morse, behavioral analyst Susan Constantine questioned the veracity of his conversion therapy horror stories, which include claims of being tortured with heat coils, electric shocks, and pinpricks.

“Most people will kind of pepper in untruths with truths,” she said. “So did he go to a therapist? Well, we couldn’t find the therapist. Number one, we couldn’t even find the location. He couldn’t remember the name. All of these things just didn’t even make any sense. So he could have had some experience that he or someone else maybe had or read about. And he literally put himself in that place. So in other words, he’s telling somebody else’s story. Yes. Okay. So, you know, did it really occur? Well, based on the analysis, there was too many indicators that he was being deceptive and so many areas that his whole entire story just fell apart. It was just, it just fell apart, but he was being truthful when he was talking about this relationship that he had with his father.”

Constantine surmised that Brinton really was traumatized by his father, which “had to have been extreme, which I think threw him down this trajectory in his life … these are wounded people who do things that are are harmful to themselves. So, I mean, I have empathy for him, but where I draw the line is that, how many people he has been duping to serve an agenda. And I also think that there is a bigger piece here that the LGBTQ is using him as a poster child.”

The White House and the DOE have yet to comment on the matter.