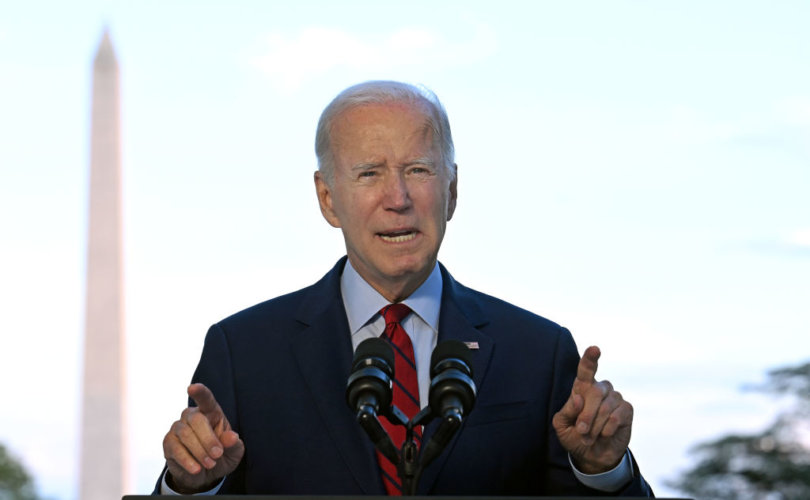 WASHINGTON, D.C. (LifeSiteNews) – President Joe Biden signed an executive order on Wednesday that ordered the Department of Health and Human Services (HHS) to look into using Medicaid dollars to fund women who travel to other states for abortion.

The executive order directs HHS Secretary Xavier Becerra “to consider action to advance access to reproductive healthcare services, including through Medicaid for patients who travel out of state for reproductive healthcare services.” This is the latest executive action taken by Biden to promote abortion – he also signed an order in July that promised to fight any “attack by a state or local official who attempts to interfere with women exercising this right.”

It’s unclear how the executive order will get around the Hyde Amendment, which prohibits federal Medicaid dollars from being used to directly pay for abortions.

“This directive is in line with the President and the Attorney General’s clear statements on the Administration’s commitment to defending the bedrock right to travel across state lines to seek reproductive healthcare in states where those services remain legal,” according to a White House fact sheet. The administration also recently filed a lawsuit to stop Idaho’s ban on most abortions, even though the Supreme Court clearly ruled in Dobbs v. Jackson that states have the right to regulate abortions.

The executive order also claimed that there have been “numerous reports of women denied health- and life-saving emergency care” because doctors allegedly “fearful of legal reprisal delay necessary treatment for patients until their conditions worsen to dangerous levels.”

The executive order noted that Biden is set to receive an update from the “Task Force on Reproductive Healthcare Access” which “is co-chaired by the Secretary of Health and Human Services, Xavier Becerra, and the Director of the White House Gender Policy Council, Jennifer Klein.”

Both are pro-abortion. Becerra, while the attorney general for California, used his office to investigate and prosecute David Daleiden after Daleiden exposed fetal trafficking by the abortion industry. Becerra also supported partial-birth abortion while a member of Congress.

Klein, an advisor to pro-abortion Hillary Clinton, reportedly strategized on ways to get around a federal law against using taxpayer dollars to fund abortions in foreign countries.

“Biden and the Democrats make a serious error in assuming Americans nationwide agree with their radical agenda – using the full weight of the federal government to impose abortion on demand up to the moment of birth,” Susan B. Anthony Pro-Life America’s leader Marjorie Dannenfelser stated on Wednesday. She criticized Biden’s plan to “illegally [force] taxpayers to fund it, ‘cracking down’ on nonprofits that provide life-affirming alternatives, and threatening to destroy any guardrails of democracy that stand in their way.”

“Their pro-abortion extremism is deeply unpopular, in key battleground states and among rank-and-file Democrats and Independents,” Dannenfelser stated.

“Our ground team is talking with millions of voters at their homes about the stakes of the upcoming midterm elections, working tirelessly to expose pro-abortion candidates’ lies and extremism,” she stated. “Our fellow Americans are appalled to learn that our country allows brutal late-term abortions when unborn children have beating hearts and feel pain, along with North Korea and China, and that the Democratic Party supports this radical policy.”

The group said that “pro-abortion extremism hurts women and children and is a liability at the ballot box.”

Students for Life Action President Kristan Hawkins questioned why Biden did not focus more on the baby formula shortage but instead if focusing on abortion.

“It’s tough to be a baby in Biden’s America. Where is the executive order on addressing baby food shortages? Is it possible that Biden keeps signing executive orders on abortion because he doesn’t know how to help children once they are born?” Hawkins wrote in an email today to LifeSiteNews. “This is just one more White House media show in an attempt to look like the President is doing something – anything – as Americans struggle.”