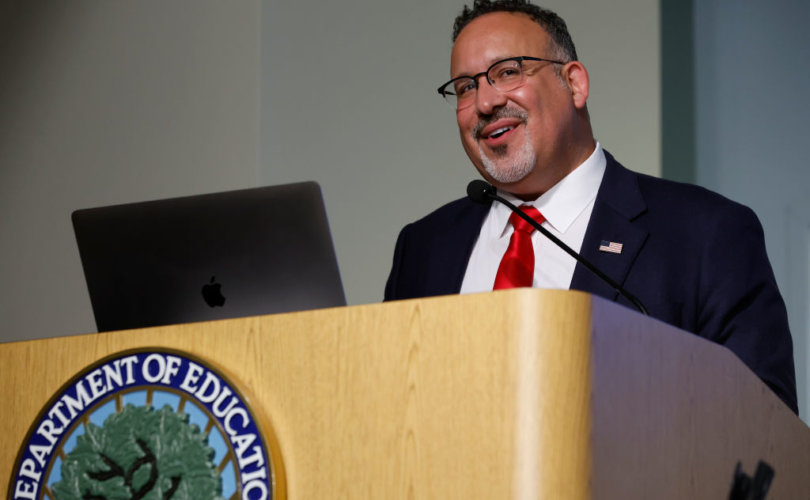 WASHINGTON, D.C. (LifeSiteNews) – The Department of Education (DOE) released proposed regulations Thursday that would expand Title IX, the 1972 law that prohibits discrimination in education based on sex, to include “gender identity.”

The regulations include allowing “transgenders” to use bathrooms according to the sex they falsely identity as and enforcing the use of preferred pronouns.

In a statement released Thursday, the DOE said that the proposed regulations would “strengthen protections for LGBTQI+ students who face discrimination based on sexual orientation or gender identity. And they will require that school procedures for complaints of sex discrimination, including sexual violence and other sex-based harassment, are fair to all involved.”

According to the DOE, the decision to expand Title IX protections to include “gender identity” was a result of an executive order signed by President Joe Biden that sought to combat “discrimination” against homosexuals and the gender-confused. The DOE also cites the Supreme Court’s ruling in Bostock vs. Clayton County, which ruled that Title VII of the Civil Rights Act protects “gender identity” and sexual orientation in addition to biological sex in the workplace.

According to the proposed regulations, all schools that receive federal funding would have to allow for biological males to use women’s restrooms and locker rooms. The new regulations also allow for enforcing the use of preferred pronouns in the classroom.

While the new regulations do not apply to sports, the DOE said that a separate set of regulations will deal with athletics. Secretary of Education Miguel Cardona, speaking about the expansion of the new regulations to include women’s sports, said that “The department recognizes that standards for student participation in male and female athletic teams are evolving in real-time … That’s why we decided to do a separate rule-making on how schools may determine eligibility while upholding Title IX’s non-discrimination guarantee.”

The proposal also notes that while the participation of biological males in women’s sports will be dealt with at a latter time, “preventing someone from participating in school programs and activities consistent with their gender identity would cause harm in violation of Title IX,” according to the DOE.

The DOE’s proposed regulations face a 60-day period for public comment before being finalized.

Conservatives have been critical of the proposed regulations. Terry Schilling, president of American Principles Project, a parental rights and pro-family group, said in a statement that “This will … violate the free speech rights of teachers, who could be forced to use all manner of absurd pronouns or else risk being accused of harassment and discrimination.”

“Given the incredible strain our educators are under simply to do the primary job of teaching students, asking them to choose between yielding to the latest radical gender fad or losing their job is unconscionable,” Schilling continued.

Speaking to Fox News, Matt Sharp, an attorney with conservative Alliance Defending Freedom (ADF) said, “You can see this playing out in everything from using accurate pronouns to maintaining separate locker room showers on the basis of sex … They think that telling a man you’re not eligible for the women’s team is harmful and violates Title IX, and that’s simply not consistent with Title IX, its original meaning or what it’s been interpreted to mean for the past 50 years.”

At least 18 Republican attorneys general have signed a letter addressed to the DOE saying that the new regulations would destroy women’s sports. According to the letter, “Your proposed rule merely pretends to reserve the issue of biological males participating in women’s sports for a separate rule-making.”

“Because the Biden Administration’s attempt to change the focus and meaning of Title IX is an attack on the rights of girls and women and will make them less safe and cause them to lose vital opportunities, we will fight your proposed changes to Title IX with every available tool in our arsenal.”

I will keep fighting for equal opportunity for girls and women. Leftists would destroy years of progress by extending Title IX protections to biological males pretending to be females. Read our multistate letter: https://t.co/BvcmYwqMem

“Beyond the gender identity issue, the Department has failed to offer sufficient justification as to why the Title IX regulations require revision,” the letter continued. “Your newly proposed rule guts the historic 2020 Rule. And it does so for no reason other than some apparent need to pander to your far-left constituencies.“ Signatories of the letter include Indiana Attorney General Todd Rokita and Montana Attorney General Austin Knudsen.

Early last month, the Department of Agriculture (USDA) announced that it would withhold federal lunch funding from schools that do not extend Title IX protections to include “gender identity,” also citing Biden’s executive order and the Bostock decision.

RELATED: UK hospital finally admits ‘transgender’ patient raped a woman after denying it was possible for a year

In a letter released June 14, 26 attorneys general argued that the USDA’s decision to withhold the funding was illegal, arguing that the rule “imposes new—and unlawful—regulatory measures on state agencies and operators receiving federal financial assistance from the USDA.”

“We have long had a productive relationship with the federal government, managing various food and nutrition programs guided by the principles of cooperative federalism … But the Guidance flouts the rule of law, relies on patently incorrect legal analysis that is currently under scrutiny in the federal courts, and was issued without giving the States the requisite opportunity to be heard,” the letter continued.