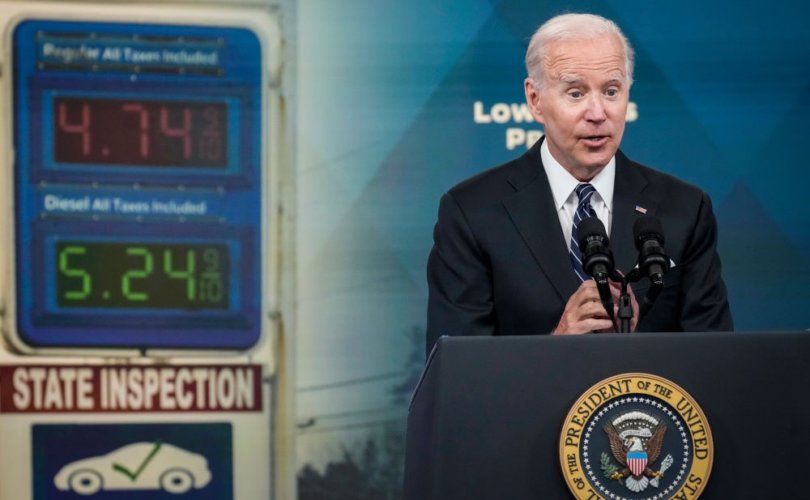 The news comes as over five million barrels of oil from the United States’ historic Strategic Petroleum Reserve (SPR) were reportedly exported to foreign countries including China last month, sparking backlash from Republicans as Americans continue to suffer under historically high gas prices.

Established in 1975 via the Energy Policy and Conservation Act, the SPR was meant to protect American energy access against “future supply cutoffs.”

In April, the Biden administration’s Department of Energy announced it was tapping into the SPR in a bid to “address Putin’s Price Hike at the pump and to establish true energy independence and lower costs for Americans into the future.”

The Biden admin sold one million barrels of oil to a Chinese state-controlled gas giant that continues to purchase Russian oil.

Reuters reported that, according to consumer data, over five million barrels of oil from the strategic reserve were exported to Europe and Asia last month rather than to domestic refineries, “even as U.S. gasoline and diesel prices hit record highs.”

In the statement, the DOE said it was “authorizing the release of 1 million barrels per day from the SPR for the next six months,” and had awarded contracts to 12 companies for the sale of 30 million barrels of crude oil.

The Washington Free Beacon pointed out Thursday that one of the 12 companies that scored a government contract was Unipec.

RELATED: Selling US oil to China is just one reason why Biden deserves to be impeached

In its April announcement, the DOE noted nearly a million barrels of oil from the SPR would be sold to the Chinese corporation, which the Free Beacon noted is connected with President Joe Biden’s scandal-ridden son Hunter.

Power the Future founder Daniel Turner told the outlet that the decision to sell the oil to Sinopec underscores the Biden family’s “relationship with China.”

The Free Beacon reported that private equity firm BHR Partners, co-founded by Hunter Biden, had purchased a $1.7 billion stake in Sinopec Marketing in 2015.

In November 2021, Biden lawyer Chris Clark said Hunter no longer held any interest in the firm. However, The Washington Examiner reported that as of March 2022, both Chinese and American records continued to list Hunter as a 10% owner of the firm.

President Biden sold nearly a million barrels of oil from our strategic reserves to China.

And who may benefit from it financially? Hunter Biden.

Meanwhile, though the announcement of oil sell-offs was framed as a way to lower “Putin’s price hike” — a Biden administration catch-phrase to divert blame for rising costs — the Washington Free Beacon pointed out that the Chinese-owned corporation has not stopped purchasing oil from Russia.

The outlet noted that in May, Sinopec “chartered at least 10 tankers” to ship a key Russian crude, marking a “fivefold increase” compared to the previous month, according to a report by Bloomberg.

Several Republican lawmakers blasted the Biden administration on Thursday for selling off emergency stores of U.S. oil to foreign governments, including Communist-controlled China.

House Energy and Commerce Committee ranking member Cathy McMorris Rodgers said in a statement to Fox News Digital that sell-offs of emergency oil reserves to “foreign adversaries like the Chinese Communist Party” compromises both “our energy security and national security.”

“Our strategic reserves are for national security, not to satisfy global oil markets,” he said.

During a Friday press conference, White House Press Secretary Karine Jean-Pierre said oil companies, not the Biden administration, were to blame for sending the vital resource to other countries.

“We cannot control what oil companies do with their oil,” Jean-Pierre said Friday, adding “you should ask the oil companies about where they are sending their oil that they purchase and why.”

Biden has drawn heavy criticism for his handling of the ongoing gas crisis, including his decision to cancel new oil and gas drilling leases, ax the Keystone XL Pipeline project, and increasingly look to foreign powers like Iran, Saudi Arabia, and Nicaragua for oil.

Recently, Biden has promoted the idea of a federal gas tax holiday, and sparked derision for a July 2 tweet urging gas stations to lower their prices at the pump.

“Working on it Mr. President,” the US Oil and Gas Association responded via Twitter. “In the meantime — have a Happy 4th and please make sure the WH intern who posted this tweet registers for Econ 101 for the fall semester … “