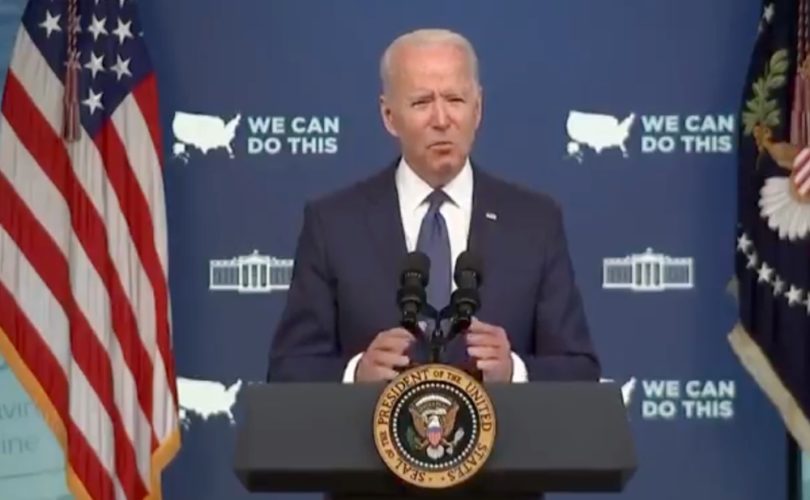 (LifeSiteNews) — The Biden administration allegedly collaborated with the leaders of the National School Board Association (NSBA) on a controversial letter the Justice Department cited as grounds to “monitor” parents concerned about their children’s education, according to emails obtained by the group Parents Defending Education (PDE).

Earlier in October, U.S. Attorney General Merrick Garland instructed the Federal Bureau of Investigation (FBI) to mobilize a “partnership” between federal, state, and local authorities to discuss “strategies” relating to handling alleged “threats” to educators from parents protesting the use of controversial instructional materials based on “critical race theory” (CRT), which asserts that race is a “socially constructed (culturally invented) category that is used to oppress and exploit people of color” through American institutions.

Garland was responding to a NSBA letter to President Joe Biden alleging that a smattering of examples of alleged unruly behavior at various school board meetings, all of which (if illegal) fell within the scope of local law enforcement, “could be the equivalent to a form of domestic terrorism and hate crimes.”

Garland’s move elicited a harsh backlash from Americans who accused the Biden administration of using the nation’s law-enforcement apparatus to intimidate concerned parents for exercising their constitutional speech and assembly rights, and it later came out that one of the letter’s chief supporting examples of “disorderly” parents, Scott Smith of Loudoun County, Virginia, was actually trying to confront school board members about the district allegedly covering up the rape of his daughter by a “transgender” student in the girls’ bathroom.

Now, the Washington Free Beacon reported that it reviewed emails that Parents Defending Education obtained via a public-records request, which reveal that NSBA president Viola Garcia and CEO Chip Slaven sent the letter to Biden without the approval of the union’s board members, and that the White House had offered feedback on it prior to Garland’s public announcement.

In a September 29 email, for instance, Slaven wrote that “in talks over the last several weeks with White House staff,” the administration had “requested additional information on some of the specific threats.”

The emails also detail other board members’ displeasure that the union’s leaders had taken the matter to the feds.

“Many of us have been put in a position now of explaining or defending this action of our association as we are asked by members of our community if we consider them domestic terrorists for showing up to our meetings and expressing their opinions,” wrote John W. Halkias, a director from the association’s Central Region, on October 1.

On Friday, the NSBA declared that “we regret and apologize for the letter,” admitting “there was no justification for some of the language included in the letter” and professing to “deeply value” the “voices of parents, who should and must continue to be heard when it comes to decisions about their children’s education, health, and safety.”

Despite assurances from some conservative commentators, such as National Review’s Andy McCarthy, that Garland would be a moderate in the role, Biden’s Attorney General has distinguished himself in large part by marshaling the weight of the Justice Department against lawful action the Biden administration disagrees with, from election security to abortion laws. In January, Biden said Garland would “take on domestic terrorism,” a label the president and his allies have insinuated should apply to non-violent conservatives and Republicans.