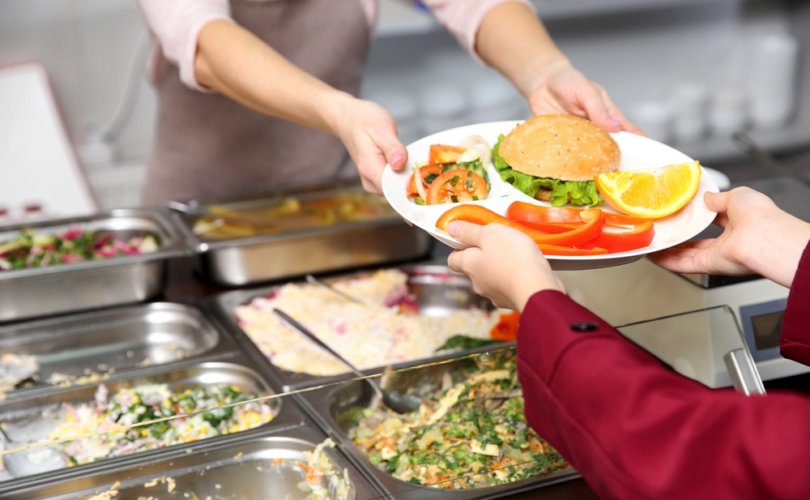 The move came after 22 states filed suit against the administration, arguing it misinterpreted the law to promote radical transgender ideology.

In an August 12 memo, the Department of Agriculture (USDA) stated that although the rule will continue to apply to the majority of public and private institutions throughout the U.S., schools will “be exempt on religious grounds if there is a conflict between Title IX and a school’s governing religious tenets.”

A USDA memo states that the Title IX regulations “do not require a religious educational institution to submit a written request for a Title IX exemption in order to claim that exemption.” https://t.co/ZGXXdBXRZp

The USDA had previously announced in May that the Food & Nutrition Service (FNS) would re-interpret Title IX — the 1972 law that prohibits discrimination on the basis of biological sex — to include sexual orientation and “gender identity,” LifeSiteNews previously reported.

The change would require schools, including religious institutions opposed to radical gender ideology, to submit to transgender policies regarding bathrooms, locker rooms, pronouns, hiring, and even dress codes, Catholic News Agency (CNA) noted. Schools that refuse to adhere to the Biden administration’s pro-transgender rule could be stripped of their qualification for the National School Lunch Program, which covers an estimated 100,000 schools and provides for almost 30 million children.

The USDA’s May announcement was met with vehement pushback from conservatives.

Florida Republican Gov. Ron DeSantis slammed Biden in June as being “off his rocker” for tying school lunch funding to affirmation of the radical LGBT agenda.

In July, 22 states filed suit against the Biden administration, contending that it had misinterpreted both federal law and the U.S. Supreme Court’s controversial 2020 ruling in Bostock v. Clayton County, in which the Court concluded that the definition of “sex discrimination” in Title VII of the 1964 Civil Rights Act should include discrimination based on sexual orientation and gender identity.

“We all know the Biden administration is dead-set on imposing an extreme left-wing agenda on Americans nationwide,” said Indiana Attorney General Todd Rokita, who co-lead the effort with Tennessee Attorney General Herbert Slatery III. “But they’ve reached a new level of shamelessness with this ploy of holding up food assistance for low-income kids unless schools do the left’s bidding.”

In late July, a private Christian school in Tampa, Florida, also filed a lawsuit against the Biden administration in a bid to obtain religious exemption from the rule, CNA reported. Represented by Alliance Defending Freedom (ADF), the school was granted an exemption and regained funds for its school lunch program.

ADF legal counsel Erica Steinmiller-Perdomo told CNA in an email that the lawsuit forced the Biden administration to walk back its “radical push to redefine what it means to be male or female in federal law.”

“After ADF’s lawsuit, USDA made clear that they will automatically respect religious exemptions under Title IX for religious schools — for now,” Steinmiller-Perdomo said.

According to the USDA’s August 12 memo, Title IX regulations “do not require a religious educational institution to submit a written request for a Title IX exemption in order to claim that exemption.”

— Article continues below Petition —
Free Enoch Burke, the teacher jailed after not using teen's "they" pronoun
Show Petition Text
17771 have signed the petition.
Let's get to 20000!
Thank you for signing this petition!
Add your signature:
Show Petition Text

Religious school administrators looking for “assurance” of their religious exemptions can write a request to the USDA’s Office of the Assistant Secretary for Civil Rights.

Meanwhile, though the Biden administration decided to exempt religious institutions from its LGBT mandate, some Catholic schools have decided to simply opt out of the federal lunch program entirely to safeguard their religious freedom.

“As with any federal subsidy, schools that participate in these programs are subject to a wide variety of federal mandates, which could ultimately impact decisions concerning admissions, extracurricular activities, facilities, and logistics,” said Archdiocese of St. Louis executive director of communications Brecht Mulvihill in an email to CNA.

“In some circumstances, these mandates would impede a school’s ability to faithfully carry out the teachings of the Catholic Church,” he wrote, explaining that the decision to withdraw was “not due to one specific rule, law, or mandate.”