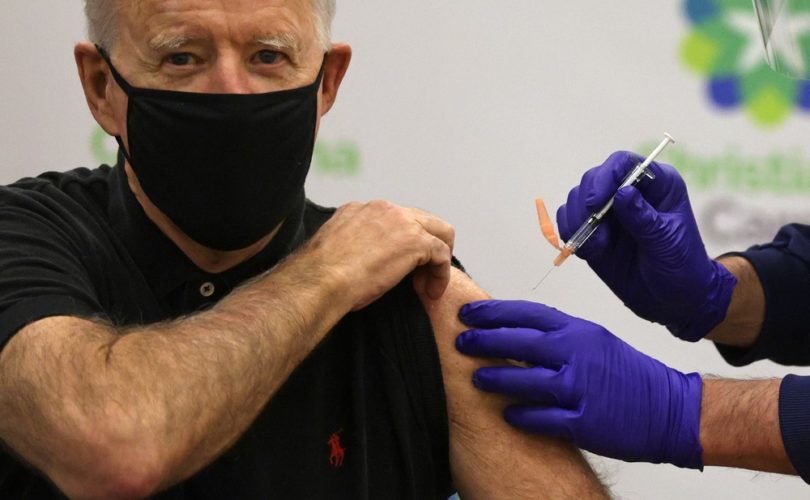 WASHINGTON, D.C. (LifeSiteNews) – The United States Department of Labor’s Occupational Safety and Health Administration (OSHA) announced this week that it will comply with a federal judge’s order to hold off enforcing President Joe Biden’s COVID-19 vaccine mandate for tens of millions of Americans.

On September 9, Biden announced that he was directing OSHA to draft a rule to “require all employers with 100 or more employees to ensure their workforce is fully vaccinated or require any workers who remain unvaccinated to produce a negative test result on at least a weekly basis before coming to work.”

Almost two months later, OSHA released the official details of the rule, which will take effect January 4, 2022. It is expected to affect around 84 million employees from around 1.9 million private businesses, further exacerbating staffing shortages across the U.S. economy.

Twenty-six states have filed lawsuits against the mandate, as have employers such as the Daily Wire and affected workers such as airline pilots. Last week, a panel of the Fifth Circuit Court of Appeals temporarily blocked the mandate over “grave statutory and constitutional issues,” then rejected a Biden administration appeal to lift the stay, finding that the mandate “grossly exceeds OSHA’s statutory authority.”

Judge Kurt Engelhardt wrote that the mandate “threatens to substantially burden the liberty interests of reluctant individual recipients” as well as the companies forced to impose it. Further, he wrote, Congress did not intend OSHA “to make sweeping pronouncements on matters of public health affecting every member of society in the profoundest of ways.”

The Fifth Circuit ordered OSHA to “take no steps to implement or enforce” the Emergency Temporary Standard (ETS) “until further court order.” In an update on the DOL website, OSHA says it will comply: “OSHA has suspended activities related to the implementation and enforcement of the ETS pending future developments in the litigation.”

The agency did say that it “remains confident in its authority” to impose the mandate, and will continue to accept general public comments on the mandate until December 6. While the announcement does not mean the controversy is resolved, it does mean that employers will not be able to shift the blame for their own vaccine mandates onto the federal government unless and until the Fifth Circuit’s judgment is reversed.