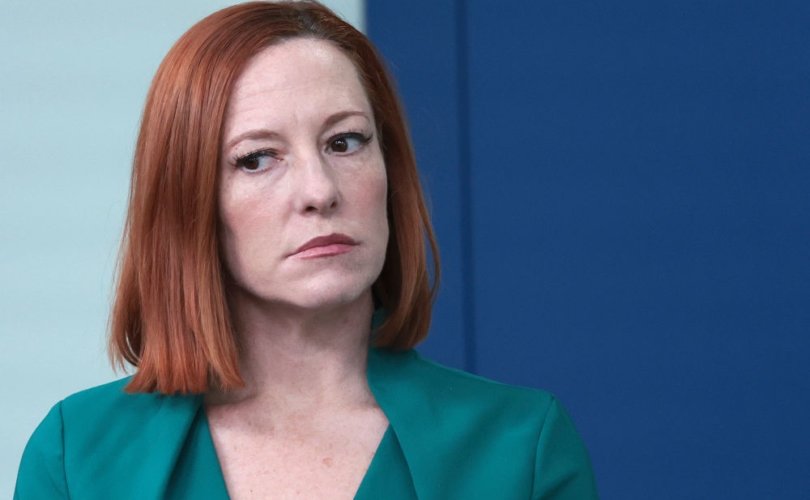 Update, 5:04PM CST: This report has been updated to include additional information on the map distributed by pro-abortion activists.

WASHINGTON, D.C. (LifeSiteNews) – The Biden administration refused Thursday to tell pro-abortion activists not to bring their protests of a potential Roe v. Wade reversal outside the homes of Republican-appointed Supreme Court justices despite the potential threats to the justices or their families.

Last December, the Court began consideration of Dobbs v. Jackson Women’s Health Organization, which concerned Mississippi’s HB 1510 law banning abortions from being committed past 15 weeks for any reason other than physical medical emergencies or severe fetal abnormalities. After its enactment in 2019, the Fifth Circuit Court of Appeals deemed it unconstitutional because of an “unbroken line dating to Roe,” the 1973 ruling that imposed on all 50 states a “right” to pre-viability abortion.

It remains unclear whether the draft represents a final decision to overturn <Roe, a tentative decision subject to change, was prepared in anticipation of a majority to overturn, or was written in hopes of persuading Alito’s colleagues to sign on. Regardless, the leak has sent shockwaves across the political spectrum, with pro-lifers tentatively rejoicing, pro-abortion politicians and activists lashing out in anger, and many speculating that the leak may have been intended to pressure judges to flip their votes, or to incite hatred and threats against them.

Among the reactions was a pro-abortion group calling itself Ruth Sent Us, which announced plans to organize “walk-by protests” at the “homes of the six extremist justices” on Wednesday, May 11. “Our 6-3 extremist Supreme Court routinely issues rulings that hurt women, racial minorities, LGBTQ+ and immigrant rights. We must rise up to force accountability using a diversity of tactics,” the group says.

While Ruth Sent Us claimed it stands for “peaceful protests,” many harbor doubts about abortion activists’ intentions or self-control, leading Fox News reporter Peter Doocy to ask outgoing White House Press Secretary Jen Psaki, “Do you think that progressive activists that are now planning protests outside some of the justices’s houses are extreme?”

Doocy: "Activists posted a map with the home addresses of the Supreme Court justices. Is that kind of thing this president wants?"

PSAKI: "I don't have an official U.S. government position on where people protest." pic.twitter.com/kpqF1FUGVF

“Peaceful protest? No, peaceful protest is not extreme,” Psaki answered, the New York Post reported, to which Doocy followed up, “Some of these justices have young kids. Their neighbors are not all public figures. So would the president think about waving off activists who want to go into residential neighborhoods in Virginia and Maryland?”

“I think our view here is that peaceful protests — there’s a long history in the United States in the country,” Psaki doubled down. “And we’ve certainly encouraged people to keep it peaceful and not resort to any level of violence.”

When Doocy noted that the group “posted a map with the home addresses of the Supreme Court justices” and asked if that was “the kind of thing the president wants to help your side make their point,” Psaki again gave lip service to protesting “peacefully” while refusing to stake out “an official U.S. government position on where people protest.”

Psaki also legitimized the activists’ rage by stating, “the president’s view is that there’s a lot of passion, a lot of fear, a lot of sadness from many, many people across this country about what they saw in that leaked document,” and that the protests were happening “because women across the country are worried about their fundamental rights that had been law for 50 years — their rights to make choices about their own bodies and their own health care — are at risk. That’s why people are protesting. They’re unhappy. They’re scared.”

In at least one case, one of the locations includes a street that is only a block and a half long with about 17 houses total, so the we-didn't-tweet-exact-addresses excuse rings a little hollow.

More than a dozen other states plus the District of Columbia have laws on the books legally protecting abortion, at least three of which explicitly codify the practice as a “right.” Abortion would remain legal in those jurisdictions, as well as the remaining states that have not spelled out abortion’s status one way or another, but without Roe state residents would have the power to vote on the issue for themselves, or lobby their elected representatives to change the law in either direction. Pro-lifers in Congress could pursue a nationwide abortion ban, as well.