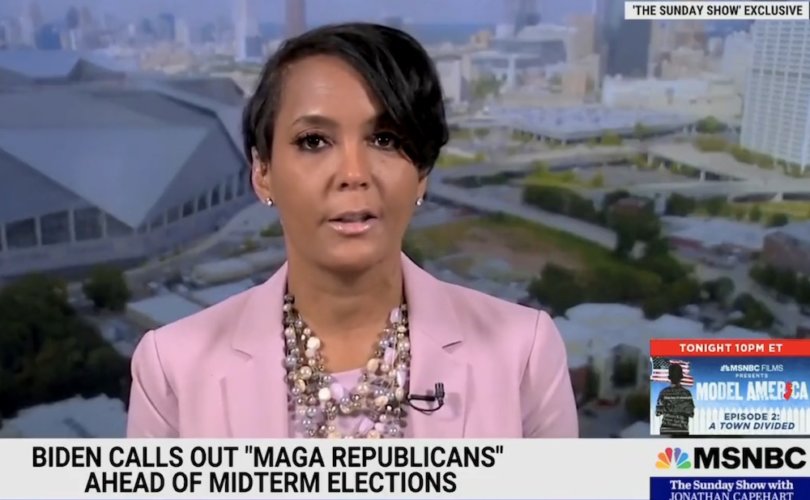 “And what we see, again, with this MAGA Republican agenda is an effort to disrupt our democracy,” she continued. “So whether it be through November and beyond November, I think it will always be important to call out any effort there is to destroy, essentially destroy the United States of America.”

“President [Joe] Biden has been very clear” about wanting “to work in a bipartisan effort,” Bottoms claimed, but such efforts are supposedly futile because of his opponents’ alleged lack of “respect for the Constitution” or “for free and fair elections.”

Bottom’s comments echo a concerted effort to paint the White House and the Democrat Party’s political foes as violent, un-American extremists, as well as to tie longtime GOP positions such as opposing abortion to former President Donald Trump. Biden recently went so far as to claim an undefined “extreme MAGA philosophy” was “like semi-fascism,” yet still gives lip service to unity:

Biden: "God bless you all, and pray that we figure how to come together better than we have so far."pic.twitter.com/AEHg5ctTkc

In addition to attacking the protection of preborn children, Bottoms alluded to the FBI, which many Republicans want reformed or reined in due to its politically-biased abuses of power, the January 6, 2021 riot at the U.S. Capitol, which Republicans do not condone or defend but have argued led to mistreatment of individuals accused of non-violent misdemeanors, and the “rule of law” (a curious complaint given Biden and Democrats’ record on crime and immigration).

She also invoked “free and fair elections,” likely an allusion to a handful of Republicans’ objections to certifying the 2020 presidential election due to concerns about vote fraud (a part of the process Democrats themselves used in every presidential election they lost in the last 20 years) and the GOP’s opposition to Democrat policies making elections less secure.

Further, Biden’s critics say his own commitment to the Constitution is impugned by issues such as his presiding over the aforementioned FBI abuses, his infringements on medical and religious freedom and states’ rights, and his appointment to the U.S. Supreme Court of Ketanji Brown Jackson, who among other issues claimed not to “hold a position on whether individuals possess natural rights.”