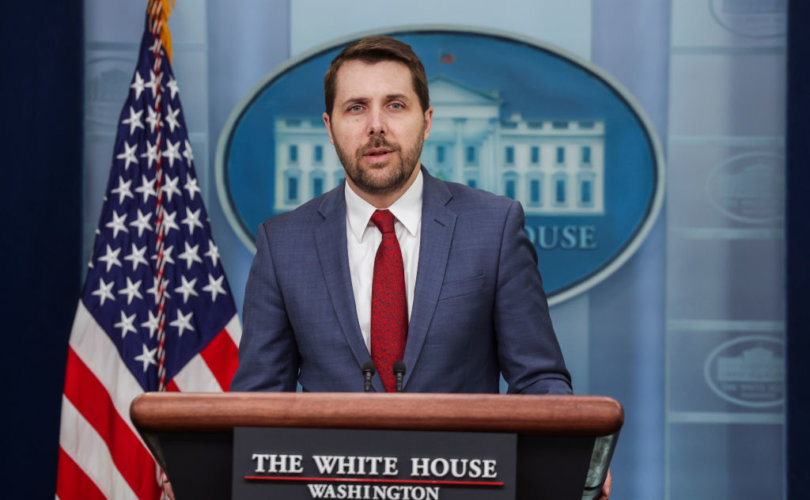 WASHINGTON, D.C (LifeSiteNews) – President Joe Biden’s top economic advisor told CNN on Thursday that the high cost of gas is part of the price Americans must pay for the “liberal world order.”

“What do you say to the families that say ‘we can’t afford to pay $4.85 a gallon for months, if not years, this is not sustainable,'” CNN’s Victor Blackwell asked Brian Deese, who directs Biden’s National Economic Council.

The question came in the context of how the Russia-Ukraine war has affected the economy. The interview began with a clip of Biden at a NATO summit saying Americans should shoulder high gas prices for “as long as it takes” to defeat Vladimir Putin.

“This is about the future of the liberal world order and we have to stand firm,” Deese told CNN.

“But at the same time, what I would say to that family and Americans across the country is you have a president and an administration that is going to do everything in its power to blunt those price increases and bring those prices down,” Deese added.

BIDEN ADVISOR BRIAN DEESE: “This is about the future of the Liberal World Order and we have to stand firm.” pic.twitter.com/LWilWSo72S

He said Biden wants a “temporary gas tax holiday” and limits on prices paid for oil to Russia. He also said the administration wants oil companies to produce more.

The Biden administration has frequently blamed oil companies and the Russian invasion of Ukraine for the high cost of gas and related inflation.

However, the administration soon after taking office ordered a freeze on new oil and gas leasing on federal lands and also demanded further crackdowns on coal plants.

Oil company executives responded to the criticism that they have not produced more oil by pointing to the need for a long-term strategy and assurances in order to make investments. Department of Energy Secretary Jennifer Granholm has stated a desire to “transition” away from oil and gas.

“We’re working through an energy transition … The reality is, we have to take some time to get off of oil and gas, we recognize this. This is a transition,” she said in November 2021.

Biden Energy Secretary Jennifer Granholm on rising gas prices: “We’re working through an energy transition…The reality is, we have to take some time to get off of oil and gas, we recognize this. This is a transition.” pic.twitter.com/ZOCJIdZCa5

“We look forward to working with the Biden administration on issues around energy security,” Phillips 66 stated in June in response to criticism. “We do, however, want to underscore that US refineries are running at high utilisation rates. Further, refinery capacity expansion is a long-term proposition, given permitting, engineering design, capital cost estimates and equipment procurement.”

“We share these concerns, and expect the Administration’s approach to energy policy will start to better reflect the importance of addressing them,” the company stated in response to the Biden administration. “Unfortunately, what we have seen since January 2021 are policies that send a message that the Administration aims to impose obstacles to our industry delivering energy resources the world needs.”