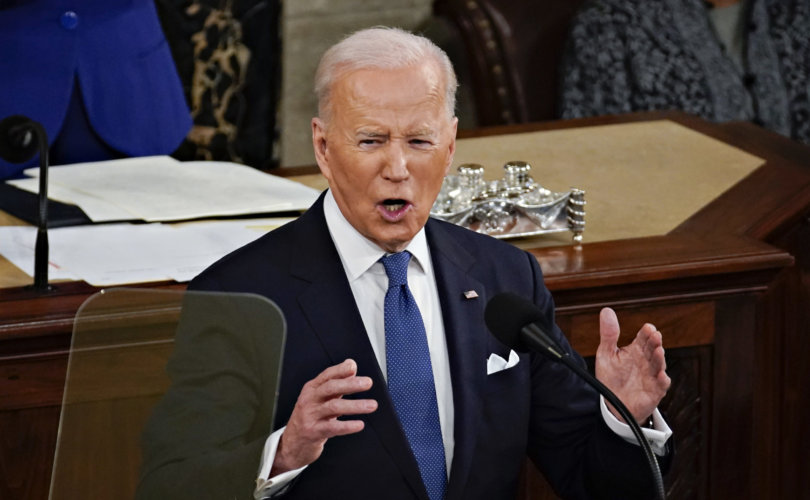 WASHINGTON (LifeSiteNews) – Self-professed Catholic Joe Biden doubled down on his support for legalized abortion on demand and the radical, pro-LGBT Equality Act during his State of the Union address Tuesday.

“The constitutional right affirmed in Roe v. Wade – standing precedent for half a century – is under attack as never before,” Biden said.

“If we want to go forward – not backward – we must protect access to health care,” he added, euphemistically referring to abortion. “Preserve a woman’s right to choose.”

The Supreme Court has signaled that it may overturn Roe v. Wade in a case, Dobbs v. Jackson Women’s Health Organization, that challenges a Mississippi law banning abortion at 15 weeks of pregnancy. Mississippi has asked the justices to scrap the 1973 decision, which purported to find a hidden constitutional right to elective abortion until a baby reaches viability. Several states and Washington D.C. currently allow abortion up to the moment of birth for any reason or under loose “health of the mother” exemptions, as is permitted under Roe.

A ruling in the Dobbs case is expected in June.

Biden’s State of the Union speech came the day after the U.S. Senate overwhelmingly failed to pass an abortion bill that would override state pro-life laws and enshrine a “right” to abortion in federal law ahead of the Dobbs decision. The Senate shot down the bill, dubbed the Women’s Health Protection Act (WHPA), in a 46-48 vote Monday.

No Republicans supported the measure, and one Democrat, Sen. Joe Manchin of West Virginia, voted against it. The White House slammed the failure of the WHPA as “extremely disappointing” in a statement Monday.

And in Texas, a heartbeat law that prohibits abortion at around six weeks of pregnancy remains in force, despite Roe and multiple legal challenges from the Biden administration. The Supreme Court allowed the law to take effect at the beginning of September, which Biden blasted at the time as an “unprecedented assault on a woman’s constitutional rights under Roe v. Wade.” Abortions in the Lone Star State plummeted by around 60 percent in the first month after the ban went into effect.

The Catholic Church denounces abortion as intrinsic evil and murder, as it has since the time of the Apostles, and “attaches the canonical penalty of excommunication” for formal cooperation in abortion. Catholic teaching against the “moral evil” of abortion is “unchangeable,” according to The Catechism of the Catholic Church. The Church also affirms the scientific reality that life begins at conception – another teaching that Joe Biden has stated that he does not believe, reversing his previous public stances on life and abortion.

In his State of the Union address, Biden renewed his support for the pro-LGBT, so-called Equality Act, which would make “sexual orientation” and “gender identity” protected classed under federal law. The act would compel religious institutions to hire homosexuals and transgenders and could be used to penalize the Catholic Church for refusing to “ordain” women, advocates have warned.

“And for our LGBTQ+ Americans, let’s finally get the bipartisan Equality Act to my desk,” Biden said Tuesday.

The Equality Act, which passed the House largely along party lines in 2021, would additionally codify a federal “right” to abortion and nullify conscience protections for healthcare practitioners, the U.S. Catholic bishops’ pro-life committee has said.

As he has in the past, Biden on Tuesday denounced an “onslaught” of recent transgender laws advanced by Republican state legislators.

In the last year, at least nine states have enacted bans to prevent gender-confused males from competing in women’s and girls sports, and two have implemented laws restricting experimental transgender surgeries and drugs for minors.

Biden during his address also encouraged young people who identify as transgender to “reach your God-given potential.”

For people who say that they’re “transgender,” reaching their “God-given potential” requires accepting their unchangeable sex and renouncing confused “gender identities” that reject God’s Will, according to the religion that Biden professes.

The Magisterium of the Catholic Church upholds the biological truth that there are only two genders and that God creates every human being either male or female. “By creating the human being man and woman, God gives personal dignity equally to the one and the other. Each of them, man and woman, should acknowledge and accept his sexual identity,” states the authoritative Catechism of the Catholic Church.

“One of the most serious constitutional responsibilities a president has is nominating someone to serve on the United States Supreme Court,” Biden said. “And I did that four days ago, when I nominated Circuit Court of Appeals Judge Ketanji Brown Jackson,” he added, vowing that Jackson will continue retiring, pro-abortion Justice Stephen Breyer’s “legacy of excellence.”

Jackson, whom Biden previously appointed to the U.S. Circuit Court of Appeals for D.C., has a history of supporting abortion and other liberal causes. In her early career, she wrote an amicus brief defending a Massachusetts law that criminalized protests and counseling outside of abortion centers. The law was ruled unconstitutional in 2000.

A former Obama administration official, Jackson has been promoted on the “Supreme Court short list” of a top Soros-funded “dark money” network and backed by leading far-left activist groups that aggressively lobbied the White House on her behalf.

As a public defender, she represented detainees at Guantánamo Bay and once criticized the “excessiveness” of punishments for sex offenders. She’s already facing ethics questions after hiring PR operatives linked to the Democratic Party to help with her prospective nomination.

Planned Parenthood and other national abortion groups have strongly endorsed Jackson. The liberal judge, Planned Parenthood Action said, “will bring a commitment to the Court to protect our individual liberties, including reproductive and LGBTQ+ rights.”

“She is on record opposing the free speech rights of pro-life advocates pleading to save lives outside abortion centers and supporting the false claim that abortion is ‘health care,’” president Marjorie Dannenfelser of the pro-life Susan B. Anthony List said about Jackson. “We have no doubt she will work with the most pro-abortion administration in history to enshrine abortion on demand nationwide in the law.”

Jackson’s nomination could face an uphill battle in the evenly-split 50-50 Senate, where she can’t afford to lose a single Democratic vote. But she may, however, be able to count on a few Republican senators who have indicated that they might help Biden secure his Supreme Court pick.