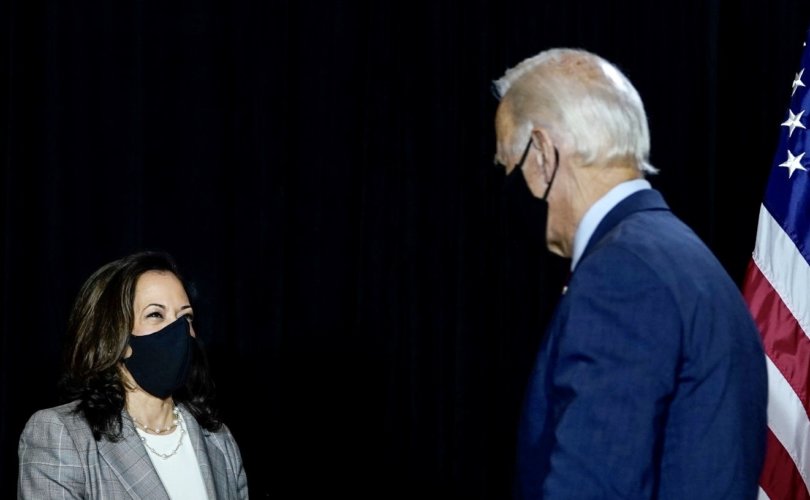 WILMINGTON, Delaware, August 14, 2020 (LifeSiteNews) — Joe Biden and running mate Kamala Harris are calling for a nationwide mask mandate for at least three months to stop the spread of the coronavirus.

After a briefing with health experts in Wilmington, Delaware, the presumptive Democratic presidential nominee stated at a virtual press conference that Americans should be required to wear a mask while outside for the next three months, and that all states should mandate masks, The New York Times reported.

Biden claimed this would save 40,000 American lives, CBS News reported.

“Every single American should be wearing a mask when they’re outside for the next three months, at a minimum. Every governor should mandate mandatory mask-wearing,” he said.

“Let’s institute a mask mandate nationwide starting immediately, and we will save lives.”

“It’s not about your rights,” Biden added. “It’s about your responsibilities as an American. … Be a patriot. Protect your fellow citizens. … Step up. Do the right thing.”

Harris also appeared at the press conference and echoed Biden’s call for a nationwide mask mandate.

“That’s what real leadership looks like. We should all be wearing a mask for the next three months because it will save lives,” said Harris, an abortion extremist and Planned Parenthood ally.

Harris also pushed the idea that Americans are anxiously awaiting a COVID-19 vaccine.

“I think it’s important that the American people, looking at the election coming up, ask the current occupant of the White House: When am I actually gonna to get vaccinated?” she said.

“Because there may be some grand gestures offered by the current president about a vaccine. But it really doesn’t matter until you can answer the question: When am I going to get vaccinated?”

Trump responded to the Biden-Harris call for a mask mandate by stating that “I trust the American people, and the governors want to do the right thing, to make the right decisions, and Joe doesn’t,” according to CBS News.

He also suggested a mask mandate would override the individual liberties of the American people.

“If the president has the unilateral power to order every single citizen to cover their face in nearly all instances, what other powers does he have?” Trump said, as quoted in The New York Times.

“While Joe Biden would allow rioters and looters and criminals and millions of illegal aliens to roam free in our country, he wants the federal government to issue a sweeping new mandate to law-abiding citizens,” the president said, as quoted in CBS News.

“He wants the president of the United States, with the mere stroke of a pen, to order over 300 million American citizens to wear a mask for a minimum of three straight months, because … he thinks it's good politics, I guess, no matter where they live, and no matter their surroundings.”

Biden did not qualify his statement with an age range, Breitbart noted, adding that Biden was seen last week riding a bicycle with a mask on:

Thirty-four states currently mandate face coverings in public, according to the American Association of Retired Persons, and The New York Times cited two polls that found a majority of Americans favor such measures.

In Wisconsin, “an important battleground state, 69 percent of voters said people should be required to wear masks in all public places, according to a poll released Tuesday by Marquette University Law School. Polling by Quinnipiac University last month found that four in five voters in Florida and Texas also supported mask mandates,” it reported.

CBS News cited a July study alleging that if masks had been mandated in April and May, 40,000 Americans would not have died.

However, the evidence shows that not only are masks ineffective in stopping the spread of the Wuhan coronavirus, but they actually harm the wearer, according to American neurosurgeon Russell Blaylock and physician Jim Meenan.

And in a detailed two-part analysis, LifeSiteNews co-founder Steve Jalsevac debunked the “pro-mask propaganda that paints mask critics as uncaring, heartless, ignorant persons” and asserted that the push for mandatory masks is driven by fear, not science, and comes as the number of deaths from the coronavirus has dropped sharply.

“The climate is oddly getting increasingly demanding about what we all must do now just as deaths from the Wuhan virus have been dramatically declining and, although massive testing has revealed far more people are infected than previously thought, the large majority of these infected persons will experience mild or no symptoms from infection,” Jalsevac wrote.

Moreover, many people remain terrified by the threat of infection, and it is next to impossible to get clear information on the current state of the Wuhan coronavirus, or the successful treatments for it, he said.

The reason is that the coronavirus crisis is being exploited by globalists, the pharmaceutical industry and those who don’t want Trump to be re-elected so that they can gain an unprecedented level of social and political control over the public, Jalsevac contended.

“(M)ost of the information sources are controlled by truth-hostile forces, especially all the mainstream media, wanting to paint the most negative picture to facilitate their plan to radically change world society,” he said.

By the time the November presidential election arrives, Americans will be so “disoriented, frightened, anxious, emotionally and physically exhausted” and in such “dire financial straits” that they will vote for the Democrats, not realizing they will be “voting for the very people who have most wanted the frightening disorientation they have been living through for the past several months.”

Explosion in mandatory masking isn’t driven by science, but fear
Biden: COVID-19 an opportunity to ‘fundamentally change the science relating to global warming’
Bioethicist who thinks people should die at 75 advising Biden on coronavirus
To Mask, or not to mask? That is the question