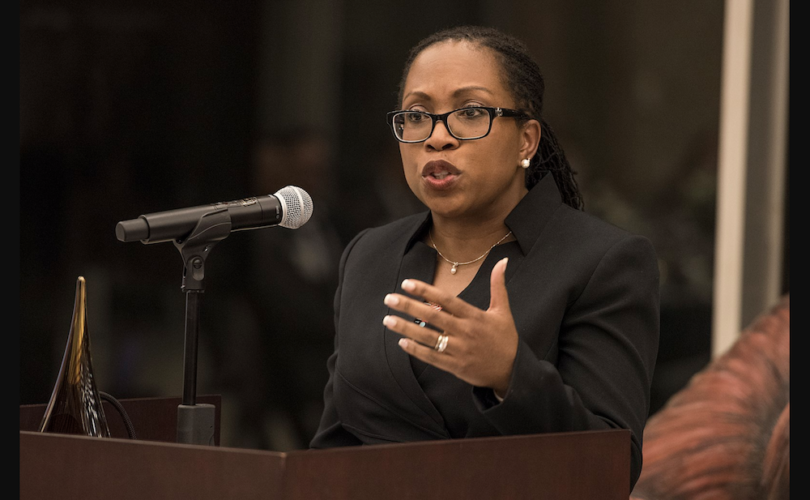 “Judge Jackson is one of our nation’s brightest legal minds and has an unusual breadth of experience in our legal system, giving her the perspective to be an exceptional Justice,” the White House said in its announcement of the nomination.

The announcement makes no mention of Biden’s pledge that his first Supreme Court nominee would be a black woman, but instead focuses on Jackson’s qualifications, and claims she “has a unique appreciation of how critical it is for the justice system to be fair and impartial,” and specifically highlights the fact that she has “multiple law enforcement officials in her family,” presumably to stunt suspicions of left-wing bias against police.

Undercutting that suggestion, however, is the fact that just days before this announcement, a coalition of “progressive” groups including MoveOn and Demand Justice wrote a letter to Biden stating that they wanted a nominee “with civil rights or public defense experience,” knowing Jackson was the only name on the president’s shortlist who qualified.

“Jackson is not highly regarded as a judge” and “has a striking record of reversals by the D.C. Circuit — including by liberal judges — in her high-profile rulings” for getting things “very wrong,” writes Ed Whelan of the Ethics & Public Policy Center. “Inquiries I have made recently of folks knowledgeable about her work confirm that she continues to have a middling reputation. This criticism, I’ll emphasize, is on grounds of quality, not ideology. Indeed, she is not regarded as ranking high among the ten or so district judges that President Obama appointed to the federal district bench in D.C.”

Whelan also notes that Jackson was not on Demand Justice’s 2019 list of “diverse, progressive” Supreme Court candidates, but did make the cut for the group’s updated list in late 2021. “The only plausible explanation I can come up with for why Demand Justice did not have Jackson on its initial list is that it was alarmed by her service as an advisory school board member for the Montrose Christian School in Rockville, Maryland, before she became a judge.”

Whelan goes on to document several examples of the now-defunct school’s steadfast Biblical principles on life, gender, marriage, and sexuality, which are anathema to left-wing sensibilities. In April 2021, Jackson distanced herself from those statements, claiming in Senate testimony she “was not aware” of them, and that she had “served on many boards” and did not “necessarily agree with all of the statements […] that those boards might have in their materials.”

In addition, National Review’s Dan McLaughlin highlights the fact that Jackson is a member of Harvard’s Board of Overseers, which would give her a conflict of interest in the Supreme Court’s upcoming review of the university’s affirmative action policies.

“Recusal, however, is only the tip of the iceberg,” McLaughlin writes. “The Senate should also probe Jackson on her role in and approval of Harvard’s policy of race discrimination, which has led to vastly disparate effects on the admission rates for Asian students compared with African-American students with comparable academic records [… Harvard’s ‘Expectations of Service’] criteria make it clear that Jackson cannot plead ignorance: She was expected to be informed about major issues involving the college, and this is by far the most prominent controversy involving the college and its educational mission during the time of her service as an overseer.”

Biden and Jackson are slated to address the nation Friday afternoon from the White House.