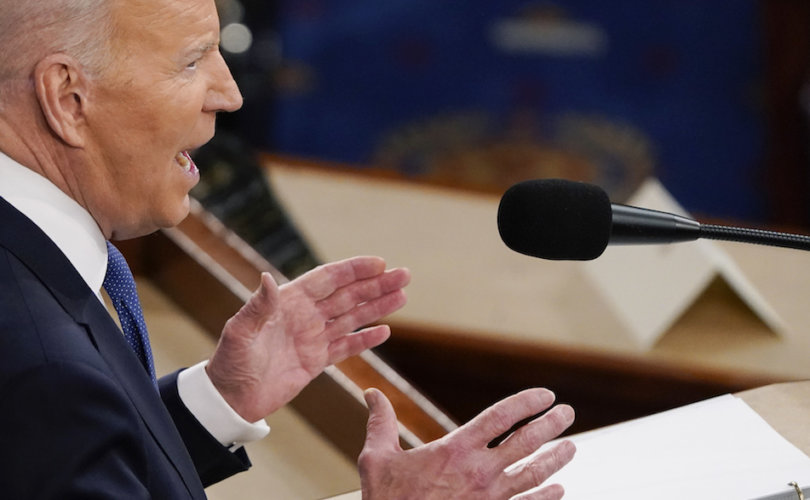 President Joe Biden delivers his first State of the Union address to a joint session of Congress at the U.S. Capitol in Washington on Tuesday, March 1.Getty Images

WASHINGTON (LifeSiteNews) – Joe Biden is trying to reset his COVID policy and domestic agenda without abandoning vaccination amid cratering approvals and the collapse of his jab mandates.

“Because of your resilience and the tools we have, tonight I can say we are moving forward safely, back to more normal routines,” Biden said.

He pointed to the U.S. Centers for Disease Control and Prevention’s (CDC) recently relaxed mask guidelines, which now recommend masks based on hospitalization levels, rather than cases. The CDC released the new guidelines less than a week before Biden’s speech.

“We’ve reached a new moment in the fight against COVID-19, with severe cases down to a level not seen since last July,” Biden said Tuesday. “Thanks to the progress we have made this past year, COVID-19 need no longer control our lives.”

“Let’s use this moment to reset. Let’s stop looking at COVID-19 as a partisan dividing line,” he said.

The shift in messaging resembles strategies strongly encouraged by Biden’s polling firm, Impact Research, ahead of the address.

A leaked memo from Impact Research last week advised Democrats to “take credit for ending the COVID crisis phase of the COVID war” and “push for feeling and acting more normal” in time for midterm elections.

“Recognize that people are ‘worn out’ and feeling real harm from the years-long restrictions and take their side,” the memo emphasized, noting that twice as many Americans say they’re more concerned about COVID’s effect on the economy than about the illness itself.

“Six in 10 Americans describe themselves as ‘worn out’ by the pandemic,” the memo added. “The more we talk about the threat of COVID and onerously restrict people’s lives because of it, the more we turn them against us and show them we’re out of touch with their daily realities.”

The CDC’s shift on masks came just one day after the Impact Research memo, the Washington Examiner observed.

Biden for months centered his COVID policy around hard-line vaccine and mask dictates. He repeatedly tried to scapegoat the unvaccinated, blaming them for the spread of the virus and the country’s other ills, like an unimpressive economic recovery.

“Your refusal has cost all of us,” he said in a blistering speech in September as he announced a package of federal vaccine mandates, including one for tens of millions of private workers.

In the same press conference, Biden memorably threatened to use his “power as president” to push governors who opposed COVID restrictions “out of the way.” “A distinct minority of Americans, supported by a distinct minority of elected officials, are keeping us from turning the corner,” he said.

But Biden’s mandates crumbled rapidly amid a string of legal losses. The Supreme Court finally struck down his jab requirements for businesses early this year, days after they were supposed to take effect.

At the same time, the shots have proved unable to stop coronavirus. Vaccinated people have dominated record COVID-19 surges around the world in recent months, and data shows that the “fully vaccinated” have had higher infection rates than the unvaccinated in several countries.

The U.S. reported more than one million daily COVID infections multiple times in January with over 60 percent of the population “fully vaccinated,” shattering records from before the jab rollout even began.

And voters appear to have soured on the Biden’s administration failed, heavy-handed tactics. His approval ratings on COVID have been negative for almost two months and haven’t been higher than 50 percent since last fall. About 47 percent of voters currently support the administration’s handling of the virus, according to recent polling, down from nearly two-thirds in May.

A Ipsos-Axios poll published yesterday found that just 43 percent trust Biden to provide them with accurate information regarding COVID. Only one-third think that his administration has done a good or excellent job of fighting COVID-19.

While the rhetoric is changing, COVID shots simply aren’t going anywhere, Biden stressed Tuesday. During his State of the Union address, Biden still listed the jabs as the first plank of his updated COVID-19 platform.

“We will never give up on vaccinating more Americans,” he declared. “We will continue vaccinating the world. We’ve sent 475 million vaccine doses to 112 countries, more than any other nation. And we won’t stop.”

He noted that his administration will soon approve the injections for kids under five years old, who face virtually no risks of death or serious illness whatsoever due to the disease.

“Now, I know parents with kids under 5 are eager to see a vaccine authorized for their children,” Biden said. “The scientists are working hard to get that done and we’ll be ready with plenty of vaccines when they do.”

Between 0.00-0.01 percent of all child COVID cases in the U.S. have resulted in death, according to the American Academy of Pediatrics. Young people, meanwhile, are especially at risk for vaccine-related side effects, like myocarditis, which can be fatal. A CDC study in January reported that boys age 12 to 15 have a 133 times greater risk of the condition after Pfizer vaccination.

As part of a plan to combat variants, Biden announced Tuesday that he will also seek to roll out variant-specific shots “within 100 days.”

“Over the past year, we’ve gotten much better at detecting new variants. If necessary, we’ll be able to deploy new vaccines within 100 days instead of many more months or years,” he said.

Biden additionally pushed Pfizer’s new COVID pill. “We’ve ordered more of these pills than anyone in the world,” he boasted. “And Pfizer is working overtime to get us 1 million pills this month and more than double that next month.”

The Biden administration continues to attack cheap, alternative therapeutics such as ivermectin, which studies show can be used to treat the virus.

On Tuesday, Biden also pivoted to a repackaged version of his multitrillion-dollar pro-LGBT “Build Back Better” human infrastructure” and “climate change” plan.

The proposal failed last year in the evenly-split Senate without the support of a few of Democrats from Republican-leaning states, like U.S. Sen. Joe Manchin of West Virginia.

During his address, Biden unveiled a list of left-wing domestic priorities, much of them taken from his original budget-busting Build Back Better package, including universal child care, tax credits for “green energy,” a federal paid family leave program, massive affordable housing investments, and a $15 federal minimum wage hike.

“I call it building a better America,” Biden said.

The Impact Research memo last week had urged Democrats to “fully enter the rebuilding phase that comes after any war.”

Experts and watchdogs previously warned that Biden’s Build Back Better agenda would add hundreds of billions of dollars to the deficit without generating significant growth. Inflation, now a top issue for voters, continues to spiral to multi-decade highs under Biden’s watch and after record-level COVID-era government spending.

The initial Build Back Better package contained pro-LGBT projects and provisions that would have excluded Catholic and other religious providers. Biden again vowed his support for the radical, pro-LGBT Equality Act and for Roe v. Wade during his speech Tuesday.

The Biden administration’s new messaging on COVID and domestic priorities comes as Democrats across the country abruptly drop increasingly unpopular mandates and attempt to shift focus before the midterms.

California Gov. Gavin Newsom said Monday that California, Oregon, and Washington will all lift mask requirements for schools on March 11, following a slew of other Democrat-led states, such as New Jersey and Nevada. Several Democratic mayors, including in New York City and Washington, D.C., have ended citywide vaccine mandates in recent days.

Just a handful of states, including Hawaii, Oregon, and Washington, still have indoor mask mandates, which research has demonstrated do not stop COVID-19 spread.

The White House announced Monday that it would relax mask rules for “fully vaccinated” people ahead of Biden’s State of the Union speech.