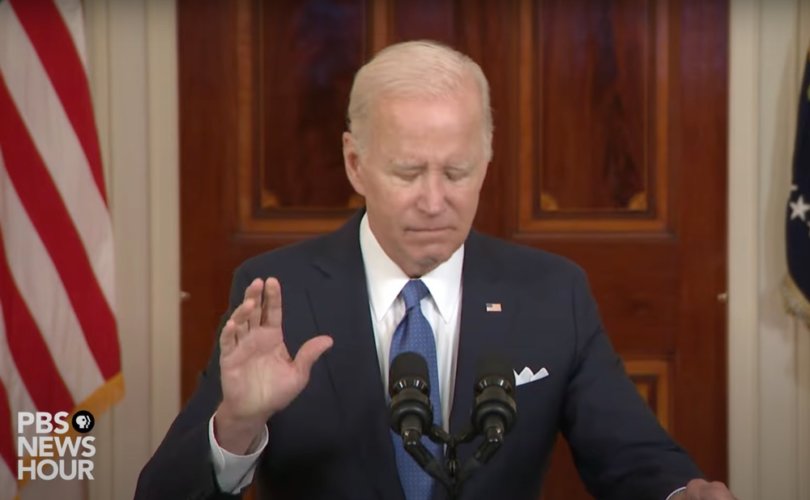 WASHINGTON, D.C. (LifeSiteNews) — While blasting the U.S. Supreme Court’s landmark ruling overturning the federal “right to abortion” established in Roe v. Wade on Friday, President Joe Biden appeared to accidentally admit that the victim of abortion is a child, not a clump of cells or nonhuman entity.

In a speech just hours after the Supreme Court released its official decision in Dobbs v. Jackson Women’s Health Organization, in which a majority overturned both Roe v. Wade (1973) and Planned Parenthood v. Casey (1992), Biden called the ruling “extreme” and asserted it would result in a denial of health care for millions of women in pro-life states.

According to Biden, a self-professed Catholic, the decision to reverse the federal “right to abortion” established in Roe and allow states to make their own laws regulating abortion is “so extreme that women could be punished for protecting their health.”

Biden added that the decision was “so extreme that women and girls” could be “forced to bear their rapists’ child.”

Appearing to lose his place, the president said, “The child, a consequence … ” before switching gears to argue that doctors might now be prosecuted for “doing their duty” by performing abortions.

Biden: “A woman could be forced to bear their rapist’s child or the child of the consequence of … it just stuns me.” pic.twitter.com/b59JDL6tWd

RELATED: Biden says he won’t debate ‘theology’ when asked on Ash Wednesday why he supports abortion

It’s unclear whether the word “child” was in Biden’s scripted pro-abortion remarks. After accurately referring to the victim of abortion as a “child” twice, Biden hesitated, then said, “it just stuns me.”

At the beginning of the speech, Biden had argued that the U.S. Supreme Court, by overturning Roe and Casey, “took away a Constitutional right from the American people.”

“They didn’t limit it, they simply took it away,” Biden said. “That’s never been done to a right so important to so many Americans.”

The president received strong pushback for his remarks from pro-lifers on social media.

“Yeah, slavery was once seen as a right, too,” remarked conservative commentator Allie Beth Stuckey. “Then it wasn’t.”

Biden: “The court took away a right that was already recognized.” Yeah, slavery was once seen as a right, too. Then it wasn’t.

Meanwhile, even as Biden decried the overturning of Roe v. Wade as a “sad day” for America, former president Donald Trump released a statement Friday hailing the ruling as the “biggest WIN for LIFE in a generation.”