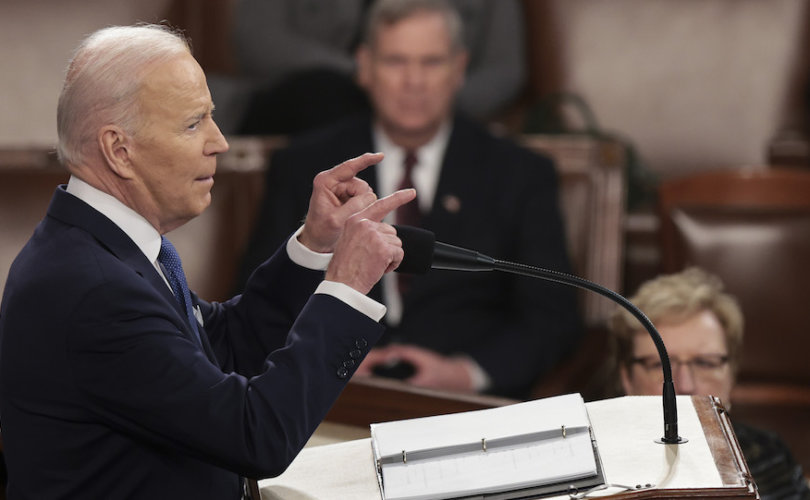 WASHINGTON (LifeSiteNews) – Joe Biden announced during his State of the Union address Tuesday night that he will ban Russian airlines from entering U.S. airspace and target personal assets of Russian oligarchs, as tensions with Russia continue to rise after the invasion of Ukraine.

“The United States Department of Justice is assembling a dedicated task force to go after the crimes of the Russian oligarchs,” Biden said. “We are joining with European allies to find and seize their yachts, their luxury apartments, their private jets.”

“Tonight, I am announcing we will join our allies in closing off American airspace to all Russian flights,” he added.

Biden follows the European Union and several western countries, including Canada and the U.K., that have issued bans on Russian aircraft in recent days.

Biden also said Tuesday that he will not deploy American troops to Ukraine, but will “defend our allies” if Russian President Vladmir Putin “decides to keep moving west.”

As with his disastrous Afghanistan withdrawal, Biden has faced widespread criticism for his handling of the Russia-Ukraine conflict. He declined to impose sanctions on Russia for weeks amid a large-scale troop build-up on the Ukrainian border and in January memorably signaled that the U.S. would not retaliate against the Russian government over “a minor incursion” into Ukraine.

“I think what you’re going to see is that Russia will be held accountable if it invades. And it depends on what it does,” he said during a January 22 press conference. “It’s one thing if it’s a minor incursion and then we end up having a fight about what to do and not do, et cetera.”

Soon after taking office, Biden also lifted sanctions against the Nord Stream 2 pipeline that links Russian natural gas to Western Europe, even after halting the domestic Keystone XL pipeline. The Biden administration in December lobbied Congress against a GOP-led effort to restore sanctions on Nord Stream 2.

The White House again blocked the pipeline as Russian troops invaded Ukraine last week, and has since announced export controls and sanctions on Russian financial institutions. Biden has so far declined to target Russia’s energy sector or impose secondary sanctions on Russian banks, despite pressure from Republicans.

Tuesday’s State of the Union, the first of Biden’s term, comes as his poll numbers continue to crater amid spiking inflation, the crisis at the Southern border, and record-level crime.

A NPR/PBS NewsHour/Marist poll last week reported that 56 percent of Americans view Biden’s first year as a failure. Only 43 percent said that they approve of his approach to negotiations with Russia, down from nearly 50 percent last summer.

Just 10 percent said that foreign policy should be at the top of the Biden administration’s priorities.