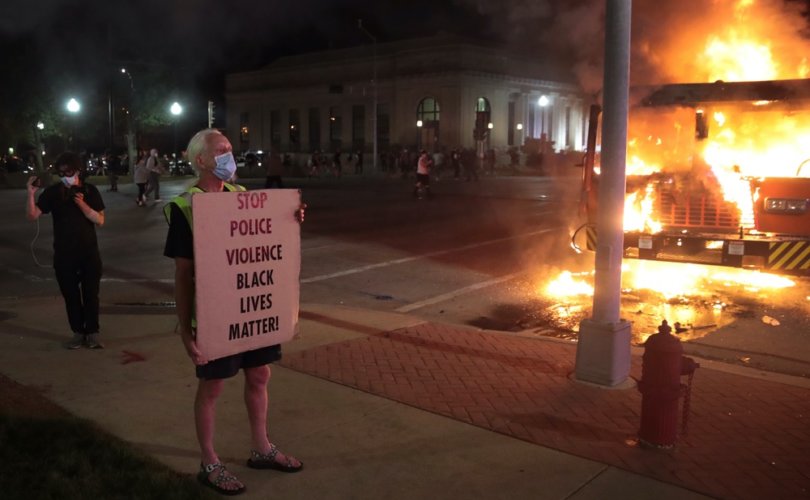 Fires burn around downtown during a second night of rioting on August 24, 2020 in Kenosha, Wisconsin Scott Olson / Getty Images

September 2, 2020 (LifeSiteNews) – After a summer of silence from Joe Biden on the devastating destruction and violence being perpetrated in Democrat-run American cities by Antifa and Black Lives Matter “protesters,” the Democrat presidential candidate has finally opened his mouth to condemn it, disingenuously blaming President Trump.

“Remember: every example of violence Donald Trump decries has happened on his watch. Under his leadership. During his presidency,” Biden tweeted.

Remember: every example of violence Donald Trump decries has happened on his watch. Under his leadership. During his presidency.

Until now, the chaos which has ravaged Minneapolis, Portland, Seattle, Washington, D.C., Kenosha, and other cities across America has been excused – if not cheered – by leftist Democrat politicians and their supporters in mainstream media.

A short video montage tweeted by CaldronPool.com reminds Americans who deserves the blame for inciting three months of mayhem:

How did you think it would end? pic.twitter.com/AcQVu1NdsF

“For months, Democrats ignored or excused the chaos engulfing our cities. Sen. Kamala D. Harris (D-Calif.) went so far as to raise bail money for those arrested during the riots in Minnesota,” wrote the Washington Post’s Marc Thiessen. “The looting and vandalism went completely unmentioned at the Democratic convention. In his acceptance speech, Joe Biden condemned the violence in Charlottesville three years ago, but not the violence that was taking place in Portland, Ore., that very week.”

“Now, all of a sudden, Biden is finally speaking out. What changed? The polls. A new Harvard CAPS/Harris Poll finds 77 percent of Americans are extremely or very worried about crime in our nation’s cities, and a majority believe that local officials are not arresting and prosecuting the perpetrators. So, Democrats have come up with a new strategy: Instead of ignoring the violence, they are trying to blame it on President Trump,” explained Thiessen.

Others took to Twitter to call out the former vice president under Obama for guileful remarks.

“Do you think we are too dumb to remember your democrat governors have repeated refused to let the president send help to stop your violent supporters?” asked Melissa Tate. “When he does send them anyway to help, your media called him a tyrant.”

“The American [people] see you,” she added.

Do you think we are too dumb to remember your democrat governors have repeated refused to let the president send help to stop your violent supporters? When he does send them anyway to help your media called him a tyrant. The American pple see you

Father Frank Pavone, national director of Priests for Life, did not mince words in his response to Biden

So that's how you view the presidency? A dictatorship? Direct power over cities? In other words, exactly what your ignorant followers and Party try to accuse the President of?
What idiots.

Biden doubled-down on his mendacious claim at a campaign event in Pittsburgh, Pennsylvania on Monday.

In his speech, Biden tortured the facts about the ongoing urban violence, mentioning “right-wing militia” while ignoring Antifa and Black Lives Matter, the actual perpetrators.

“Fires are burning and we have a president who fans the flames, rather than fighting the flames,” declared Biden. “But we must not burn. We have to build. This president long ago forfeited any moral leadership in this country. He can't stop the violence because for years he's fomented it.”

“The anarchy, the vandalism and assaults on ordinary citizens in Democrat-run cities, they say, is not the fault of Democratic leaders,” said Thiessen in his commentary. “Amazingly, they are actually trying to use the violence that they failed to control to win control of the White House.”

“On Monday, Biden asked: ‘Does anyone believe there will be less violence in America if Donald Trump is reelected?’” he continued. “Translation: If you vote for Trump, your cities will continue to burn. That sure sounds like blackmail.”