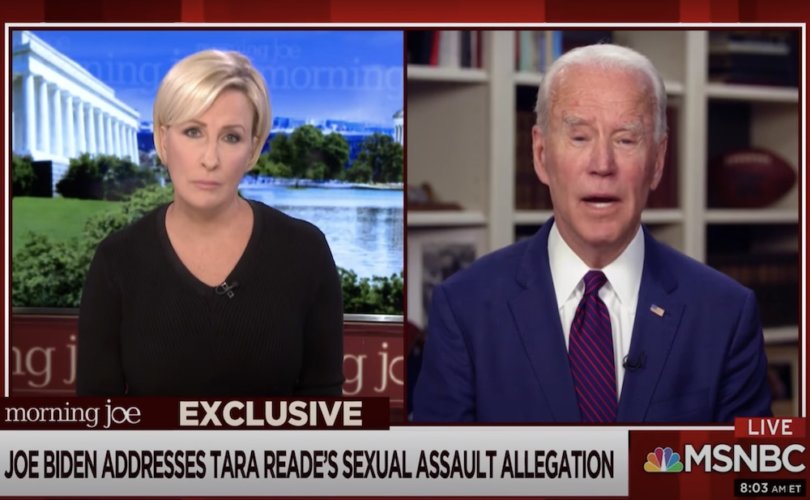 May 1, 2020 (LifeSiteNews) – Former Vice President Joe Biden appeared on MSNBC’s Morning Joe on Friday morning to address the sexual assault claim against him by former Senate staffer Tara Reade, denying it once more while justifying his decision not to unseal records that could shed light on the matter.

Reade alleges that in 1993 then-Senator Biden assaulted her in a “semi-private” stairwell on Capitol Hill. “He had me against the wall,” she says. “And then his hands were down my skirt and up my skirt. And I was wearing – I wasn’t wearing anything underneath. And then, with his hand, he went from there and entered me – with his hand – and as he was trying to kiss me, and saying things to me.”

The Biden campaign has responded by declaring that Reade’s claims “aren’t true. This never happened.” Reade has called on Biden to unseal the University of Delaware’s records of his time in the Senate, which she says may still contain a copy of the complaint she filed with his office. (The left-wing Washington Post has backed that call.)

During Friday’s interview with Morning Joe co-host Mika Brzezinski, the former vice president offered two justifications for his refusal to unseal the records: first, that personnel files would not be in the University’s collection but rather be with the National Archives & Records Administration (Biden has requested that the NARA identify and release any record pertaining to Reade’s alleged complaint); and that releasing these files could give him unrelated political problems.

“There are a lot of things — speeches I’ve made, positions I’ve taken, interviews that I did overseas with people, all of those things relating to my job,” Biden said. “And the idea that they would all be made public, and the fact while I was running for public office, they could really be taken out of context. The papers are position papers — they are documents that existed, for example, when I met with (Russian President Vladimir) Putin, or when I met with whomever. And all of that to be fodder in a campaign at this time.”

But a NARA spokesperson told Business Insider’s Nicole Einbinder that, contrary to Biden’s claim, the agency does not keep records from the Senate Fair Employment Practices, with a Senate Historical Office staffer following up that such records are instead transferred to the General Services Administration and subject to rules forbidding their release until 50 years after the fact.

Einbinder added that Reade doesn’t just want a copy of the complaint but also copies of any notes taken by Biden aides with whom she discussed the matter, including former Chief of Staff Ted Kaufmann, who now denies ever having met with Reade.

Elsewhere in the interview, Brezinski pressed Biden on the apparent conflict between his denials and his past statements about how a woman claiming sexual misconduct (at least in the case of Supreme Court Justice Brett Kavanaugh) should be met “with the presumption that at least the essence of what she’s talking about is real.”

Attempting to reconcile his statements, Biden told Brezinski that if women “come forward and say something happened to them, they should start with the presumption they are telling the truth,” but “then you have to look at the facts.”

“What I said during the Kavanaugh hearings was she had a right to be heard,” he went on. “And she came forward, the presumption would be she's telling the truth unless it's proved she wasn't telling the truth.”

Though what little evidence exists in the case is far from conclusive, details supporting Reade’s include the fact that she has filed a police report (opening herself up to legal consequences if she’s found to be lying), the fact that a handful of former Reade associates say she told them about the incident in the 1990s, and the discovery of a 1993 clip of Reade’s mother calling Larry King’s CNN show to discuss her daughter’s “problem” with a “prominent senator.”

Regardless, much of the media and the American Left have shown relatively little interest in Reade’s claims, with Democrat House Speaker Nancy Peleosi snapping at a conservative reporter Thursday that “I don’t need a lecture or a speech” about consistency. She gave lip service to the “idea that women will be heard and be able to be listened to,” before invoking the “fact that Joe Biden is Joe Biden” and claiming “there was never any record of this.”

The Daily Beast reported this week that it “contacted 10 top national pro-women organizations for this story, including Emily’s List, Planned Parenthood Action Fund, NARAL Pro-Choice America, and the National Organization for Women. Most organizations did not respond to a detailed request for comment,” while “others replied and did not provide a statement. Following its report, acting Planned Parenthood CEO Alexis McGill Johnson said that “Vice President Biden must address this allegation directly” (it had been announced that same day Biden would be “addressing” it on Morning Joe).

The ardently pro-abortion Biden is the presumptive Democrat presidential nominee, though lingering concerns about the 77-year-old candidate’s mental sharpness have prompted speculation that Democrats may attempt to replace him at the party convention with a younger candidate, such as New York Gov. Andrew Cuomo.