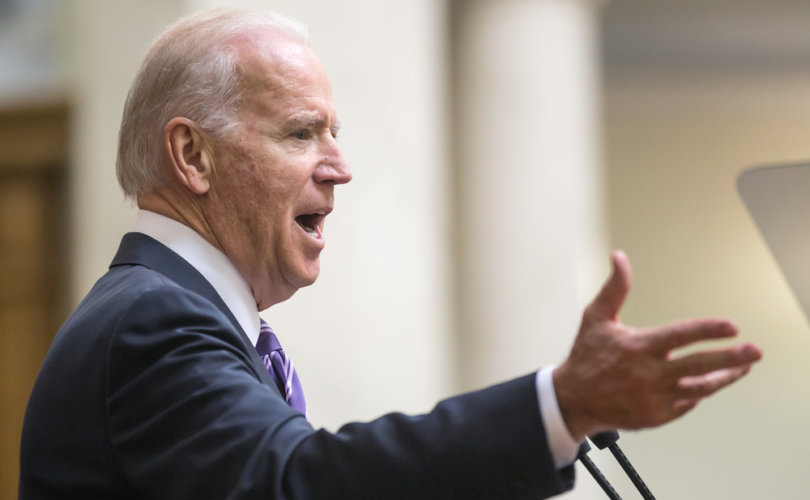 “Recently in Australia, both Victoria and New South Wales issued historic apologies for the past mistreatment of LGBT individuals under the law,” Biden said in his speech. “It’s a powerful gesture that sets the stage to move forward, so that institutionalized discrimination and mistreatment of the community can never happen again.”

Biden, a Catholic, told Australians he is “extremely proud” of the work the Obama administration has done to advance the LGBT cause in the United States, but there is still much work to be done and “talk is cheap” when it comes to defending LGBT values.

Biden is one of America’s most visible Catholic politicians. Throughout his political career, Biden has touted his Catholic faith while simultaneously promoting same-sex “marriage,” abortion, taxpayer-funded research on embryonic humans, and the Obama administration’s contraceptive mandate forcing Catholic institutions to formally cooperate with the provision of services they believe are morally evil.

As a U.S. senator, Biden voted against a variety of pro-life measures, such as measures prohibiting minors from crossing state lines to obtain abortions and blocking parents from being informed when their minor children received out-of-state abortions.

In 2015, Biden was the keynote speaker at the annual gala of the Human Rights Campaign, one of the most influential LGBT groups in the United States. He has participated in other events with the group as well.

The University of Notre Dame recently bestowed on Biden their highest honor, the Laetare Medal, for “outstanding service to the Church and society,” despite the protests of students, faculty, and the local Catholic bishop. Biden’s public service has been “largely against the Church,” 89 Notre Dame students wrote in an article expressing their disappointment at the university’s failure to “live up to its Catholic mission.”

Australia is slated to hold a popular vote on whether same-sex “marriage” should be legalized, but such a vote will not occur until at least the end of the year. Newly re-elected Prime Minister Malcolm Turnbull has resisted the lobbying of LGBT supporters, who would rather see same-sex “marriage” brought before Parliament.

This is not the first time the Obama administration has pushed the LGBT agenda abroad. In 2015, it announced the creation of a Special Envoy for the Human Rights of LGBT Persons to promote the gay agenda around the world. The U.S. Agency for International Development has poured money into the campaigns of openly homosexual candidates in pro-family countries like the Dominican Republic. The United States also sponsored the creation of an LGBT Chamber of Commerce in the Dominican Republic.