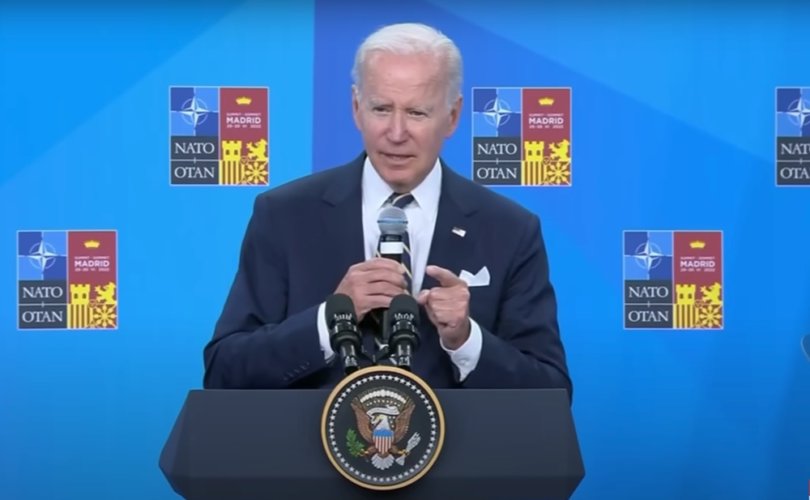 WASHINGTON, D.C. (LifeSiteNews) — After publicly decrying the U.S. Supreme Court’s landmark ruling last week that returned the right to regulate abortion to the states, U.S. President Joe Biden on Thursday promised to “do everything in my power” to enshrine abortion into federal law — including circumventing the filibuster.

During a news conference in Spain, where Biden wrapped up meetings with NATO leaders, the president argued that “We have to codify Roe v. Wade in the law, and the way to do that is to make sure the Congress votes to do that.”

The Senate filibuster requires that a bill receive at least 60 votes to stop debate. With the Senate currently split 50-50 between Republicans and Democrats, the GOP has been able to use the filibuster to block left-wing legislation. Previous attempts by Democrats to codify abortion into federal law have fallen far short of the 60-vote threshold.

Joe Biden calls for eliminating the filibuster to legalize abortion nationwide until the moment of birth. pic.twitter.com/okoVAdgA8R

Biden’s Thursday comments came in reference to the Supreme Court’s 5-4 decision Friday to strike down Roe v. Wade, the 1973 decision that had established a federal “right” to abortion throughout all 50 states.

In the 213-page decision, penned by Justice Samuel Alito, the Court declared that “The Constitution does not confer a right to abortion,” and that therefore “the authority to regulate abortion is returned to the people and their elected representatives.”

Responding to the Court’s decision, which he characterized as “outrageous,” Biden argued it was “a mistake, in my view, for the Supreme Court to do what it did.”

“I feel extremely strongly that I’m going to do everything in my power, which I legally can do in terms of executive orders, as well as push the Congress and the public,” Biden, a self-professed Catholic, said.

This isn’t the first time since the Court voted to overturn Roe last week that Biden has called for Congress to enshrine the “right to abortion” into federal law.

On Friday, shortly after the ruling was handed down, Biden told the press: “Let me be very clear and unambiguous: The only way we can secure a woman’s right to choose — the balance that existed — is for Congress to restore the protections of Roe v. Wade as federal law.”

The suggestion to overhaul the filibuster in order to enshrine the right to kill unborn babies in law comes after Biden had spent years defending the filibuster in the Senate, Time Magazine pointed out. In recent months, however, the president has begun recommending circumventing the 60-vote rule to advance laws expanding voting access despite the GOP’s voter integrity concerns.

Left-wing pundits have long advocated for torpedoing the filibuster in an effort to ram through leftist agenda items. In the wake of the Supreme Court’s decision to overturn Roe, Democrats, including House Speaker Nancy Pelosi, have ramped up rhetoric urging an end to the rule. Some have also resurrected the suggestion that Democrats pack the Supreme Court with liberal justices to counterbalance the conservative justices, who currently constitute a majority. To date, Biden has said he does not support expanding the Court.

Biden’s push to eliminate the filibuster is unlikely to succeed. Business Insider reported Thursday that Democratic Senators Joe Manchin of West Virginia and Kyrsten Sinema of Arizona have both said they will not support the president’s push to abolish the rule.

Meanwhile, it’s unclear whether successfully nuking or temporarily suspending the filibuster would actually secure the passage of pro-abortion legislation.

Recent efforts by Democrats to push through pro-abortion laws have failed not only to reach 60 votes, but even a basic majority. In February, The Women’s Health Protection Act failed by a 46-48 margin, The Daily Wire pointed out. In May, the same measure was voted down 51-49.