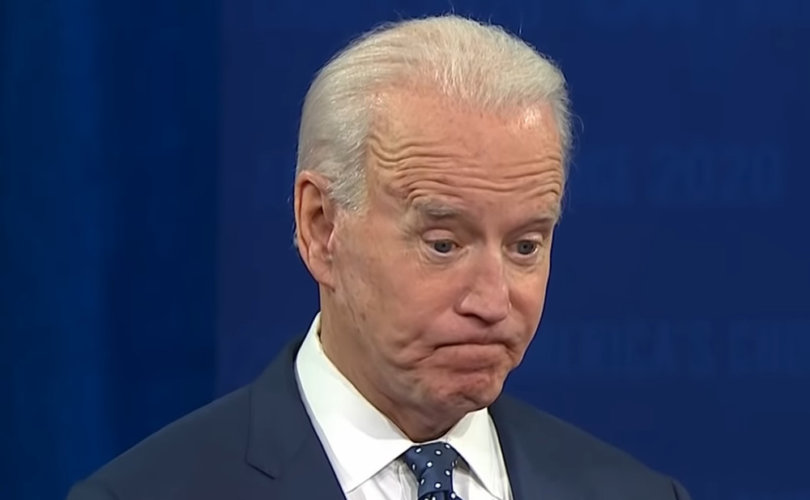 February 18, 2021 (LifeSiteNews) — President Biden suggested that China’s ongoing genocide of ethnic minorities is simply the result of Chinese cultural “norms.” He made his comments during an appearance at CNN’s “Presidential Town Hall with Joe Biden” on Tuesday.

“If you know anything about Chinese history, it has always been — the time when China has been victimized by the outer world is when they haven’t been unified at home,” he said when asked whether he discussed China’s human rights violations against the Uighur ethnic group in a call with Chinese dictator Xi Jinping.

“So the central — well, vastly overstated — the central principle of Xi Jinping is that there must be a united, tightly controlled China. And he uses his rationale for the things he does based on that,” Biden added.

“I point out to him no American president can be sustained as a president if he doesn’t reflect the values of the United States,” Biden said. “So, the idea that I’m not going to speak out against what he’s doing in Hong Kong, what he’s doing with the Uighurs in [the] Western Mountains of China, and Taiwan … he gets it,” he continued.

“[C]ulturally, there are different norms in each country, and their leaders are expected to follow,” Biden said. He then implied that China would face “repercussions” for human rights violations through international institutions, although White House Press Secretary Psaki has walked back that assertion.

The town hall comments came less than a week after Beijing blacklisted BBC News for exposing systemic torture and sexual abuse of Uighur prisoners detained in China’s Xinjiang province. Biden, who ran on a “tough-on-China” platform in 2020, had praised Xi Jinping as “very bright” and “very tough” the previous day.

According to media reports and survivor testimonies, the Chinese government has interned up to three million Uighurs across hundreds of detention camps, killing some prisoners and forcing abortions on others. Hundreds of thousands of Uighur women may have been subjected to involuntary sterilization during the years-long ethnic cleansing campaign in Xinjiang.

China’s destruction of the Uighur community had been met with forceful condemnation by the Trump administration, including with a wave of sanctions last summer and a designation of “genocide” in January.

Uighurs sitting, bound and blindfolded, waiting to be loaded onto train cars and taken — somewhere.

Joe Biden’s dismissal of the Xinjiang genocide on Tuesday is not his first bow to systematic Chinese human rights abuses. In 2011, during an official visit to China, then-Vice President Biden said that he “fully understands” and was not “second-guessing” the country’s one-child policy, which has been enforced with countless coerced abortions and infanticides.

Hunter Biden reportedly still holds a stake in a firm that he co-founded, which closed more than $1 billion worth of deals with Beijing–backed entities during Joe Biden’s vice presidency, though Joe Biden had promised in 2019 that his family would divest from all foreign ties.