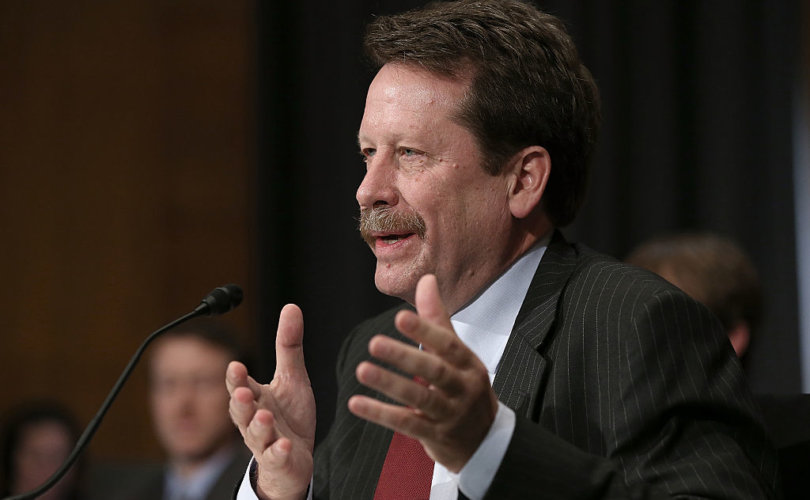 (LifeSiteNews) — President Joe Biden’s nominee to lead the FDA signaled his support for loosened restrictions on the abortion pill mifepristone and hopes for universal medical data collection at his Senate nomination hearing Tuesday.

Early in the hearing, nominee Dr. Robert Califf was asked by Sen. Richard Burr (R-NC) about his future advocacy for mifepristone and whether the drug should be removed from the FDA’s Risk Evaluation and Mitigation Strategy (REMS) protocol. According to the FDA, the REMS program addresses “certain medications with serious safety concerns to help ensure the benefits of the medication outweigh its risks.”

Califf responded that any future decision by the FDA would be data-driven: “As you are well aware a fundamental principle at FDA is that Americans should have access to drugs that are safe and effective for their FDA-indicated use. And guiding those decisions is the best available evidence with core scientific principle, just like any other area regulated by the FDA.”

“I am aware, as are you, that FDA has filed a court document indicating that its review of the REMS data on Mifepristone is soon going to be available,” he continued. “As you know in this position I am in now, I am not involved in those discussions, and I can’t predict the outcome, but I have great confidence in the FDA’s staff that they will use the latest available evidence and core scientific principles to make the best possible decision.”

If prior performance is an indication of future results, Califf will bless any further use of the abortion pill, as he has done in the past as head of the FDA without notice or explanation.

The timing for Califf’s nomination coincides with the Biden administration’s push to loosen restrictions on mifepristone. Currently, mifepristone is provided only in specified health care facilities and is unavailable for conventional prescription. Removing mifepristone from the REMS program would set the stage for its widespread distribution, perhaps even without a prescription.

Sen. Roger Marshall (R-KS), himself an obstetrician and gynecologist, raised safety concerns to Califf about such a move, noting that while he never prescribed the drug, he cared for patients in the emergency room who had physical and psychological complications from mifepristone.

“I’m very troubled by HHS’s casual attitude about prescribing RU-486,” said Marshall. “Are you [Califf] committed that that should be in the hands of physicians and prescribers and not handed out like candy?”

Califf reiterated his prior response, stating that he trusted the FDA’s skill in assessing the latest data and had no indications as to how the drug would be handled moving forward.

Sen. Bernie Sanders (D-VT) noted that there are additional reasons to distrust Califf, stating, “Since you left the FDA in 2017, you have made several hundred thousand dollars from pharmaceutical companies and have received consulting fees from Merck, Biogen, and Eli-Lily. According to your financial disclosure form, you currently own up to eight million dollars in stock of major pharmaceutical companies.”

“What kind of comfort can you give to the American people when you have been so closely tied to the pharmaceutical industry yourself?” Sanders asked. “How are they going to believe that you are going to be an independent and strong voice against this enormously powerful special interest?”

Califf said he had a history of integrity and that the Biden administration’s robust ethics pledge and those employed to support it would keep him accountable.

Califf emphasized he would prioritize establishing infrastructure and rules for the sharing of medical information. “Well, I am a ‘big data’ person,” he declared, adding that he believed the conglomeration of data across the world’s populations was the best way to develop effective treatments.

He acknowledged that such an initiative might raise privacy concerns, but argued that it would be in the public’s best interest to share medical data, particularly in preparation “for the next” pandemic.

“Now is the time to develop a systematic approach to evidence generation that will improve patient safety and provide a much more efficient way to understand the benefits and risks of medical products when used in practice,” he said.

Califf currently works as the Head of Medical Strategy and Policy and potentially crafted its policies to stifle unapproved medical discussion on its platforms. The universal sharing of personal medical data across multiple platforms with big pharma, big tech, and big government raises the specter of an enhanced surveillance state, medical passports, and the dominion of a singular institutional viewpoint.

The FDA nominee expressed passion for correcting perceived “medical misinformation” on social media and elsewhere when questioned about the pharmaceutical industry’s influence in advertising. “We need an across-the-board update and much more active FDA in terms of getting the right information … But it’s not just advertising done on TV that you are used to seeing. There’s a huge amount of misinformation going on social media that we’re going to have to deal with.”

“I am going to be very aggressive in this area of medical misinformation because one could argue it is killing more people than any particular disease right now,” he concluded.