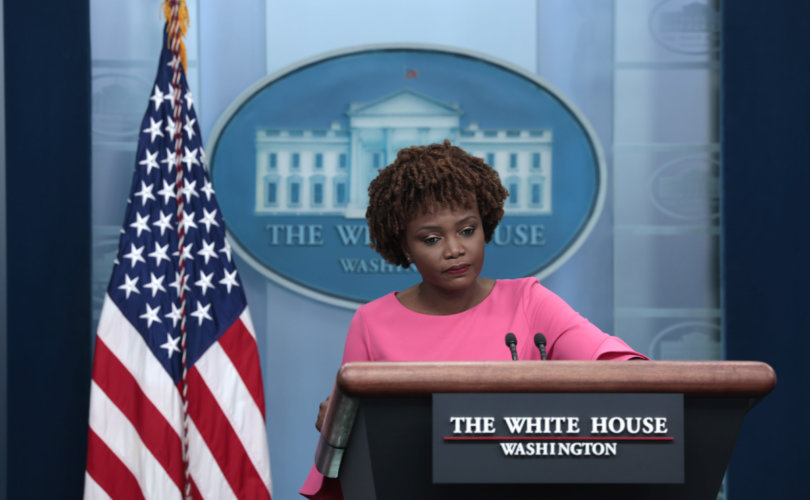 WASHINGTON D.C. (LifeSiteNews) – White House Press Secretary Karine Jean-Pierre claimed that the overturning of Roe v. Wade was an “extreme” decision that took away what she called a “constitutional right.”

Jean-Pierre says it was “unconstitutional” for SCOTUS to overturn Roe. pic.twitter.com/zQyzdZxRh8

“From day one, when the Supreme Court made this extreme decision to take away a constitutional right — it was an unconstitutional action by them — a right that was around for almost 50 years, a right that women had to make a decision on their bodies and how they want to start their families,” Jean-Pierre said during a Wednesday press conference.

The U.S. Supreme Court ruled in its Dobbs v. Jackson Women’s Health Organization decision released in June that, to the contrary, Roe was unconstitutional from the beginning.

“Its reasoning was exceptionally weak, and the decision has had damaging consequences,” wrote Justice Samuel Alito, who delivered the opinion of the court. “The Constitution makes no reference to abortion, and no such right is implicitly protected by any constitutional provision.”

In the span of only about a month, the Supreme Court decision has already had a significant impact. At least 43 abortion facilities in 11 states have stopped committing abortions in the wake of Roe v. Wade’s fall.

The Biden administration has since vehemently opposed the decision, and President Joe Biden himself has called for electing more Democrats to Congress to support codifying a “right” to abortion-on-demand in federal law.