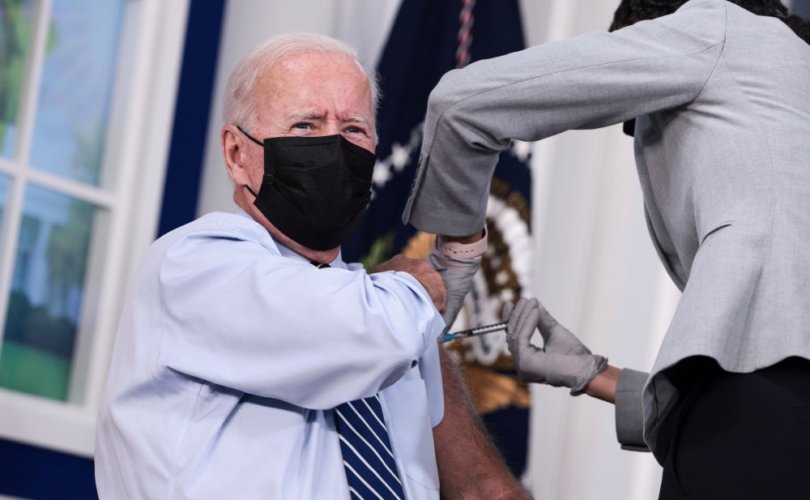 WASHINGTON D.C. (LifeSiteNews) — President Joe Biden assured reporters that, after nearly two years of job-killing and liberty-squelching lockdowns, restrictions, and mandates, Americans can look forward to a return to normal — but only if nearly 100% of them submit to the COVID jab.

Asked yesterday by journalists when the country might get back to business as usual,  Biden suggested that America would be “awful close” to fully reopening if nearly every single American got the jab.

“Well I think… Look. I think we get the vast majority, like what’s going on in some of these industries and some schools – 97, 98%, I think we’re going to be awful close,” the president said.

Biden made the comments while being filmed getting a COVID-19 booster shot at the White House on Monday afternoon. The president did not say whether Americans should expect to be required to top up with booster shots to become or remain “fully vaccinated” in future.

REPORTER: How many Americans need to be vaccinated before getting back to normal?

Author and columnist Tim Young derided the president for the sky-high and seemingly arbitrary statistic, arguing that Americans shouldn’t wait to be given permission before they begin living normally again.

“There’s no scientific or statistical basis for this… and [Biden] himself has said otherwise on multiple occasions,” Young said.

“We can be normal now… and most people are living normally already.”

During his comments to reporters, Biden qualified his responses by acknowledging that he’s “not the scientist.”

Still, the president took the opportunity to place blame for the delayed lifting of mandates and restrictions at the feet of unvaccinated Americans, saying, “I think one thing’s for certain: a quarter of the country can’t go unvaccinated and us not have a problem.”

It is unclear how Biden arrived at his statistical estimate or what scientific research pointed him to the conclusion that 25% vaccine refusal is an untenable situation which prevents full reopening.

White House COVID czar Dr. Anthony Fauci had formerly asserted that 70 to 75% of Americans would need to get the jab to attain herd immunity, in line with other scientists who had put the estimate at 60 to 70%.

In April, Fauci admitted that he had changed his benchmark for the national vaccination rate based upon polling data.

“When polls said only about half of all Americans would take a vaccine, I was saying herd immunity would take 70 to 75 percent,” Fauci told the New York Times. “Then, when newer surveys said 60 percent or more would take it, I thought, ‘I can nudge this up a bit,’ so I went to 80, 85.”

The Biden administration has been heavily focused in recent weeks on promoting a third injection for those who have taken the Pfizer-BioNTech drug, as researchers have admitted that the drugs’ efficacy wears off over time.

The admission has led many to express skepticism about the purported efficacy of the jabs.

The president’s push for widespread COVID-19 boosters was stymied earlier this month when the Food and Drug Administration voted overwhelmingly to hold off on giving the green light to third jabs for most Americans, recommending the boosters only narrowly for older adults, those with underlying conditions, and people who work in environments where there is a high risk of transmission.

The FDA’s decision not to roll out a universal booster scheme came after several high-profile professionals with the FDA announced they were quitting their roles. Some reports have suggested that the resignations came due to pressure from the federal government to approve the booster shots prematurely.

Last week, the Centers for Disease Control and Prevention (CDC)’s Advisory Committee on Immunization Practices also voted 9-6 against authorizing the third injections for people between the ages of 18-64, including those who work in high-risk environments like hospitals.

Nevertheless,  CDC head Dr. Rochelle Walensky broke with her own agency panel on Thursday and decided to unilaterally approve the boosters for younger adults in high risk environments to align with the FDA’s new EUA criteria.

“The panel on Thursday voted against saying that people can get a booster if they are ages 18 to 64 years and are health-care workers or have another job that puts them at increased risk of being exposed to the virus,” NPR reported, adding that “Walensky disagreed and put that recommendation back in, noting that such a move aligns with an FDA booster authorization decision earlier this week.”

As reported by CNBC, Walensky also adopted the panel’s other recommendations, including giving boosters to adults with underlying medical conditions and seniors aged 65 and older.

President Biden received his booster shot just days after the CDC gave its approval. Across the political aisle, Republican Senate Minority Leader Mitch McConnell of Kentucky announced on Monday that he had gotten his third dose as well.

It remains to be seen whether future jab mandates will include boosters. To date they have been offered on a voluntary basis only.

Earlier this month, Biden announced a series of sweeping COVID-19 jab measures impacting more than 100 million Americans including tens of millions in the private sector.

Crucially, Biden said the federal government will force employers with 100 or more employees to mandate the jabs for their workers.

“Tonight, I’m announcing that the Department of Labor is developing an emergency rule to require all employers with 100 or more employees, that together employ over 80 million workers, to ensure their workforces are fully vaccinated or show a negative test at least once a week,” he said in a speech at the White House September 9.

“This is not about freedom or personal choice,” Biden said. “This is about protecting yourself and those around you.”