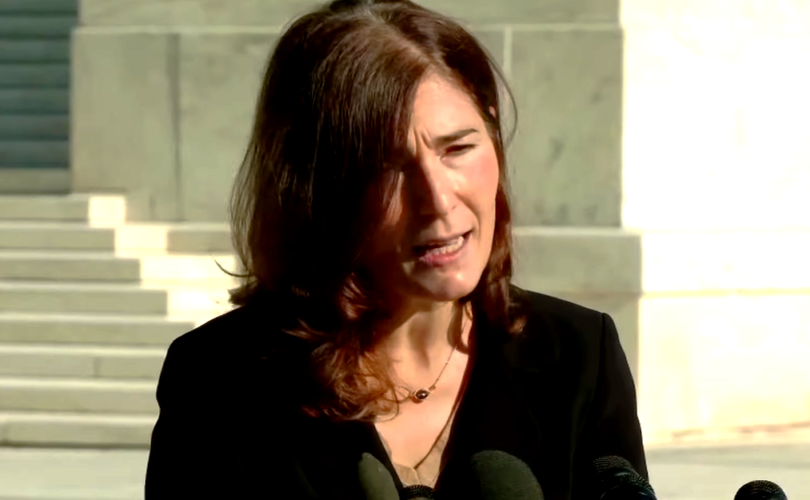 WASHINGTON, D.C. (LifeSiteNews) — One of President Joe Biden’s judicial nominees, a lawyer who unsuccessfully argued for Dobbs, was taken to task by Republican senators for her pro-abortion extremism.

The Senate Judiciary Committee held a hearing on Wednesday to consider Julie Rikelman’s nomination to the 1st U.S. Circuit Court of Appeals. She previously worked as an attorney for the Center for Reproductive Rights, an organization that opposes all limits on abortion. In 2019, Rikelman said, in reference to a partial-birth abortion ban in Oklahoma, that “[p]oliticians should never take medical options off the table for pregnant patients.”

President Biden’s nominee to be First Circuit—Judge Julie Rikelman—has spent her career being an extreme zealot for abortion.

She refuses to answer the simple question: Should abortion be legal until the moment of birth?

Senator Ted Cruz (R-TX) said that Rikelman’s career “embodies” the “pattern” of Biden nominating “partisan zealots” to the federal bench. “You have spent the majority of your professional life as an extreme zealot, advocating for abortion. That is clearly a heartfelt and personal passion of you. It is a passion you’ve decided to devote your life to but it is not remotely within the mainstream,” Cruz said.

“Your views on abortion are not middle of the road, they’re not views that most people in their typical lives encounter,” he told Rikelman. “You believe for example that abortion ought to be entirely legal right up until the moment of birth including the ninth month of pregnancy, is that correct?”

She denied that she ever took that position as a legal “advocate” and declined to share her personal views.

She has, however, shared her personal views in the past before being nominated – and that includes calling life-saving pregnancy resource centers “faux clinics.” Her 2018 opinion piece in the Huffington Post criticized the Supreme Court for ruling in NIFLA v. Becerra against California in its attempt to force pregnancy resource centers to promote abortion. “Reproductive rights advocates have long been concerned that CPCs use dishonest tactics, like internet deception and falsely presenting staff as medical providers, in order to trick women who are seeking abortion or contraception services into visiting their facilities,” she wrote.

Senator Josh Hawley (R-MO) confronted her on what she wrote about the “faux clinics” claim, since many PRCs employ medical professionals. She again referred to her work as an “advocate” when asked to explain her claim about the pro-life centers, which provide free prenatal care, free diapers, free ultrasounds, and other resources.

He said her support for “radical” abortion laws and her criticism of pro-life centers left him with a “grave concern” about her nomination.

While during the hearing Rikelman sought  to portray herself as a neutral, objective judge, pro-abortion groups were excited about her nomination and what it might mean for their agenda.

“EVERY body, no matter who they are or where they’re from, should be free to make the best decisions for themselves, their families, and their lives.,” NARAL tweeted. “We need judges like Julie Rikelman who will uphold those values.”

EVERY body, no matter who they are or where they’re from, should be free to make the best decisions for themselves, their families, and their lives. We need judges like Julie Rikelman who will uphold those values.

“Watching Julie Rikelman, nominee for the First Circuit U.S. Court of Appeals, truly gives me hope for the future of our courts and the promise of equal justice for all,” Planned Parenthood President and CEO Alexis Johnson tweeted.

Rikelman told pro-abortion Democratic Senator Dick Durbin of Illinois that she would respect the Dobbs precedent if confirmed.

However, Senate Democrats called her support for abortion proof of her “fidelity to the Constitution.”

“Julie Rikelman has a demonstrated fidelity to the Constitution and rule of law. Any attacks against her work defending the constitutional right to an abortion—which, until recently, was the law—only serve to reflect these right-wing politicians’ own extreme anti-choice views,” the Judiciary Committee Democrats wrote in a statement.