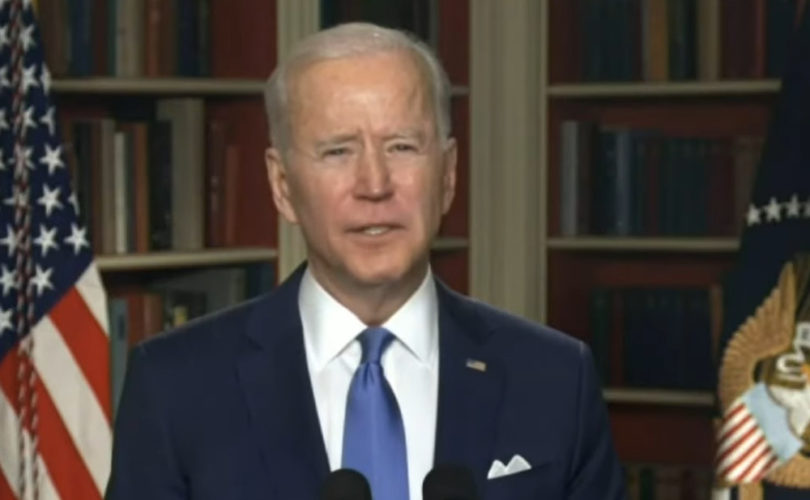 Introduced September 13, Graham’s Protecting Pain-Capable Unborn Children from Late-Term Abortions Act forbids abortions past 15 weeks’ gestation (citing preborn babies’ capacity to feel pain by that point) except in cases of rape, incest, or physical danger to the mother. The South Carolina Republican says it “will put the United States abortion policy in line with other developed nations such as France, Germany, Belgium, Denmark, Spain, and other European nations,” in contrast to the Democrat position of “abortion right up until the moment of birth.”

The Hill reported that White House Gender Policy Council director Jennifer Klein wrote in a memo that the legislation “would create a nationwide health crisis, imperiling the health and lives of women in all 50 states,” and “would transform the practice of medicine, opening the door to doctors being thrown in jail if they fulfill their duty of care to patients according to their best medical judgment.”

The memo invokes the pro-abortion talking point that abortion bans prevent doctors from treating potentially life-threatening pregnancy complications. In reality, every state abortion prohibition currently in effect expressly allows live-saving treatment in emergency situations, even if it results in the loss of a preborn child, and intentionally killing the child is neither necessary nor even the most prudent option for saving a mother’s life.

The Hill also reported that during a Democrat National Committee fundraiser this week in New York City, the President of the United States issued a condemnation of the bill riddled with falsehoods.

“Think about what these guys are talking about,” Biden said. “No exceptions — rape, incest — no exceptions, regardless of age.” As noted above, after allowing abortions for any reason during the first 15 weeks, the bill expressly includes both exceptions.

“Well, the good news is — for me, anyway — I’m going to be around at least for another two years, so he can pass it or not, I’m going to veto it,” the president continued. “It’s not going to happen.’”

Biden then made his most eyebrow-raising remark: “I happen to be a practicing Roman Catholic. My church doesn’t even make that argument now.”

While it is unclear which specific “argument” Biden was referring to, the truth is that the Catholic Church has always taught, and continues to teach, that abortion is a grave, intrinsic evil which cannot be condoned or aided by a member of the faith in good standing.

Since the first century A.D., the “unchangeable” Catholic doctrine on human life has recognized that “every procured abortion” is a “moral evil,” complicity in which “constitutes a grave offense” carrying the “canonical penalty of excommunication to this crime against human life.”

Further, the Church does not limit this conclusion to personal conscience, but declares that the “inalienable rights of the person must be recognized and respected by civil society and the political authority,” including “every human being’s right to life and physical integrity from the moment of conception until death.” It contains no exception of any kind for abortions sought due to rape or incest.

Graham’s bill cannot become law until Republicans retake the presidency, the House of Representatives, and enough Senate seats to overcome a filibuster, so the debate has largely centered around its utility as a messaging tool, eliciting mixed reactions from conservatives, Republicans, and pro-lifers.

Many have questioned the political wisdom of Republicans pushing a federal abortion law just weeks before the midterm congressional elections, with Democrats facing intense discontent on their handling of issues such as the economy and border security, especially with the political fallout of America’s new abortion status quo since the overturn of Roe v. Wade not yet entirely clear.

Polls offer inconsistent evidence both on Americans’ abortion views and on how they prioritize the issue. Several recent surveys have found more Americans identifying the preservation of abortion as “very important” to their midterm vote, though the economy, inflation, gas prices, healthcare costs, crime, and gun violence all continue to rate as higher priorities.

Further, polling outfits such as Gallup and Marist find that Americans overwhelmingly oppose allowing elective abortions past the first 12 weeks (36% according to Gallup, 29% according to Marist), placing Graham’s bill firmly within the mainstream. Ultimately, its impact on the race may come down to how effective Republicans are at conveying what it does or does not do in the face of claims such as Biden’s.