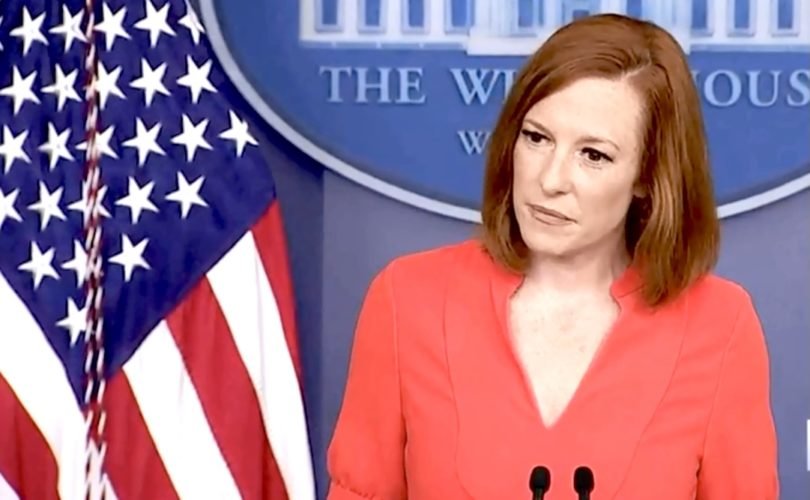 WASHINGTON, D.C. (LifeSiteNews) — Jen Psaki, the press secretary for President Joe Biden who has dodged challenging questions on his support of abortion, is reportedly leaving the White House in June for an on-air role at MSNBC.

Since the beginning of Biden’s term in office, Psaki has shown herself evasive or outright aggressive when answering challenging questions on the president’s strong support of abortion, which stands in contradiction with the Catholic faith he avowedly professes.

On the day of Biden’s inauguration, Jan. 21, 2021, Psaki dodged questions about abortion from an EWTN reporter, touting the president as a “devout Catholic” who “attends Church regularly.”

The reporter had asked Psaki about the administration’s intentions regarding the Hyde Amendment and the Mexico City Policy. The measures had blocked federal taxpayer dollars from being spent on abortions at home and overseas.

On Sept 3, 2021, EWTN reporter Owen Jensen asked why Biden supports abortion “when his own Catholic faith teaches abortion is morally wrong.” Psaki told him that the president “believes that it is a woman’s right, it’s a woman’s body and it’s her choice.”

Asked a follow-up question by Jensen about who Biden believes “should look out for the unborn child,” Psaki made an ad hominem attack, telling the male reporter he had never faced the “choices” some pregnant women do.

“He [the president] believes it is up to a woman to make those decisions and up to a woman to make those with her doctor. I know you’ve never faced those choices, nor you have ever been pregnant,” she said derisively to Jensen, “but for women out there who have faced those choices this is an incredibly difficult thing and the president believes their rights should be respected.”

In a press conference in October 2021 before the president’s visit to Vatican City, Psaki tried to shut down Jensen, who asked whether Pope Francis and President Biden would discuss abortion during their meeting that Friday.

“The White House has said they will discuss working together on efforts grounded in respect for fundamental human dignity,” Jensen began. “Will that include the human dignity of the unborn?”

Psaki initially avoided answering the question directly. Later in the briefing, Jensen again asked, “The Pope has said abortion is murder and it’s like hiring a hitman. Does the president agree or disagree with that?”

Psaki reiterated Biden’s aggressive pro-abortion stance, stating, “You know that the president believes in a woman’s right to choose.” She insisted that people should be “very familiar” with his position.

From the beginning of his presidency, Biden has made his position on abortion clear, vowing to enshrine Roe v. Wade as the law of the land and supporting access to abortion “under any circumstance.”