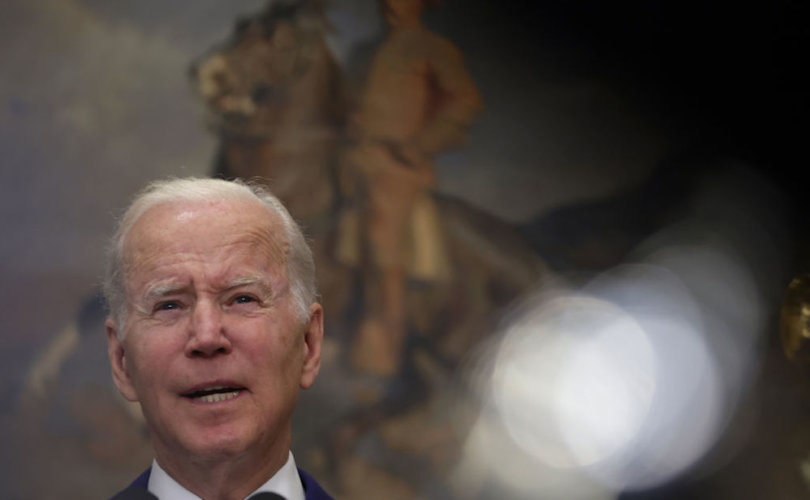 WASHINGTON, DC - MAY 04: U.S. President Joe Biden speaks during an event at the Roosevelt Room of the White House on May 4, 2022 in Washington, DC. President Biden delivered remarks on economic growth, jobs, and deficit reduction.Alex Wong/Getty Images

Biden’s remarks came during comments at the White House on the recently leaked Supreme Court draft decision that would overturn Roe v. Wade if sustained, after a reporter asked what the “next step” on abortion is once the Dobbs vs. Jackson Women’s Health Organization case “gets settled.”

Biden suggested, as he did yesterday during a press conference, that the leaked Dobbs decision, if held, would undermine the “right to privacy” and even the right of children who identify as “LGBTQ” to learn alongside other children in the classroom.

“What happens if you have the states change the law saying that children who are LGBTQ can’t be in classrooms with other children. Is that legit under the way the decision is written?” said Biden.

“What are the next things that are gonna be attacked? Because this MAGA crowd is really the most extreme political organization that has existed in American history,” Biden said, then adding to clarify, “In recent American history.”

Biden framed the leaked majority opinion yesterday as a dangerous decision that would put “other basic rights” at stake, including “the right to marry,” “how you raise your child,” and “basically … all of the decisions of your private life.”

Biden is not the only politician to recently portray the desire to protect life through the reversal of Roe v. Wade as “extreme.” Following the leak of the pro-life majority opinion, Senator Elizabeth Warren (D-MA) declared outside the Supreme Court. “I am angry because an extremist United States Supreme Court thinks that they can impose their extremist views on all of the women of this country and they are wrong.”

The draft decision Biden and Warren have accused of being “extreme” describes the so-called “abortion right” as “fundamentally different” from any other “right” held to be a fall under the Fourteenth Amendment protection of “liberty,” including “decisions involving matters such as intimate sexual relations, contraception, and marriage.”

This is because, Judge Samuel Alito argues in the draft, abortion “destroys …. what the law now before us describes as an ‘unborn human being.’”

The opinion further notes that “until the latter part of the 20th century,” a “right” to abortion was “entirely unknown in American law.”

While Biden lambastes the potential reversal of Roe v. Wade as an attack on “basic rights,” the Biden administration itself has arguably infringed upon rights of Americans, such as through its COVID jab mandate for healthcare workers and attempted jab mandate for nearly all employees.