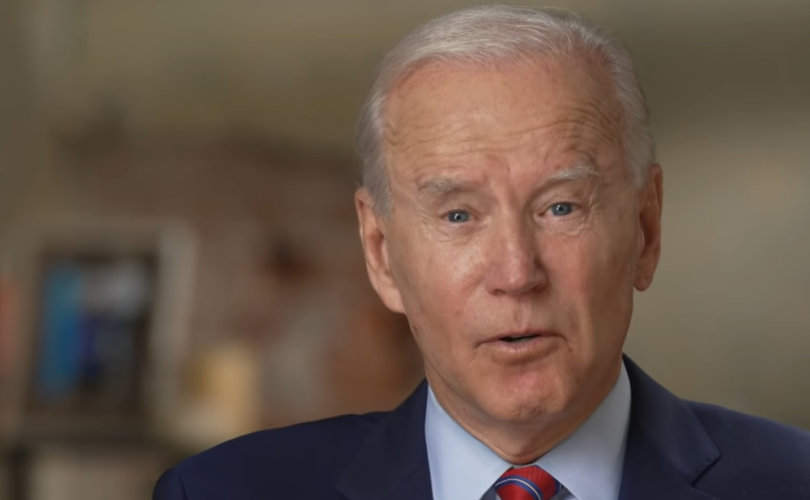 “Let’s lay one thing to rest,” Biden said in the opening of his remarks. “I may be a practicing Catholic — we used to go to 7:30 Mass every morning, in high school and going into college, before I went to the Black church.” He added, “That’s where we’d organize to march to desegregate the city.”

The president was repeating a claim he frequently made on the campaign trail, but members of the church in question, Union Baptist Church in Wilmington, Delaware, have said in interviews they cannot recall him attending. Further, Biden acknowledged in 1987 that he “wasn’t an activist” during the civil rights era, despite the boasts he would go on to make.

“I’m God-fearing thanks to my parents and to the nuns and priests who taught me in school, but I — I am no preacher,” said the aggressively pro-abortion politician. “But I’ve tried to walk my faith, as all of you have.”

“I stand here at a critical juncture for the United States and the world, in my view,” Biden told the audience, an “inflection point” in history “where what happens in the last few years and will happen in the next six or eight years, they’re going to determine what the world looks like the next 30 to 40 years.” He asked if America was going to choose “democracy over autocracy,” “a community over chaos,” and “love over hate.”

The implication was that Biden represents the former options and his political enemies the latter. In fact, the president and his allies have favored legislation that would severely limit states’ ability to ensure reliable democratic elections, his White House has admitted to urging social media platforms to suppress information vital to political decision making, and his administration has pushed a narrative of hateful right-wing extremists threatening America while neglecting the larger danger of left-wing, pro-abortion threats and violence.

Biden was not shy about invoking religion, claiming his goal “to redeem the soul of America” included recognizing that “as the Bible teaches us, we must be doers of the Word,” and that America is at her best when “we hear and heed the injunctions of the Lord and the whispers of the angels.”

Yet this comfort for framing political objectives in religious terms disappears on the subject of abortion, where the teachings of Biden’s Catholic Church are diametrically opposed to the values of the Democrat Party. Biden, who supports abortion-on-demand without legal limits and at taxpayer expense, said in 2015 he is “prepared to accept as a matter of faith” that “at the moment of conception there’s human life and being,” but would not “impose” a “rigid” or “precise” view on the issue that is “born out of my faith, on other people who are equally God­-fearing, equally as committed to life.”

“The battle for the soul of this nation is perennial,” he went on. “It’s a constant struggle between hope and fear, kindness and cruelty, justice and injustice against those who traffic in racism, extremism, and insurrection; a battle fought on battlefields and bridges, from courthouses and ballot boxes, to pulpits and protests.”

The president offered no examples of individuals or groups trafficking in “racism, extremism, and insurrection,” but all three are commonly used on the Left as generic pejoratives for Republicans and conservatives. The line echoes Biden’s notorious claim that his opponents represent an undefined “extreme MAGA philosophy” that is “like semi-fascism.”

“But at this inflection point, we know there’s a lot of work that has to continue on economic justice, civil rights, voting rights, on protecting our democracy, and on remembering that our job is to redeem the soul of America,” Biden declared, relying on the common left-wing tactic of misrepresenting goals such as wealth redistribution, banning voter identification, regulating online speech, and forced recognition of “gender identity” as continuations of past battles for equal protection of constitutional rights.

Biden’s approval rating currently sits at 44 percent according to the RealClearPolitics average. Republicans are currently debating whether former President Donald Trump or Florida Gov. Ron DeSantis would be the best choice to challenge him for the presidency in 2024.