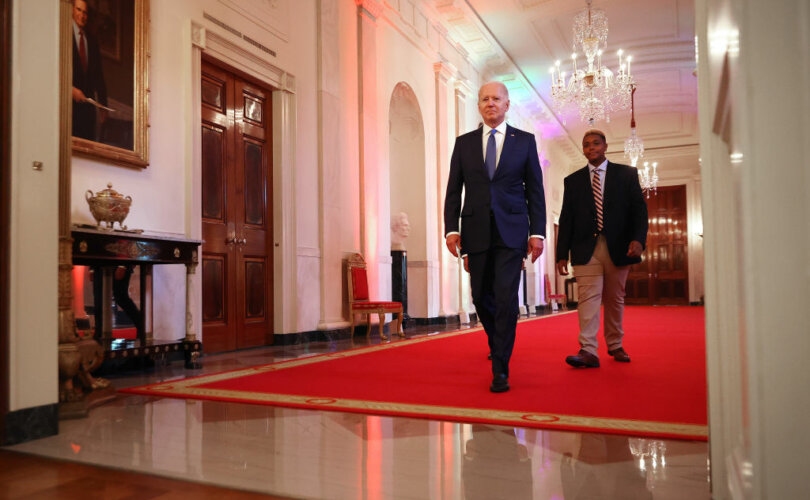 President Joe Biden (L) and Ashton Mota walk into the East Room for an event commemorating 'LGBT Pride Month' at the White House on June 25, 2021, in Washington, D.C.Photo by Chip Somodevilla/Getty Images

UPDATE, December 1, 2022: This report has been updated with additional information about the case’s implications for pro-life conscience rights.

(LifeSiteNews) — The Biden administration missed a deadline for appealing a judicial rebuke of its abortion and transgender mandate on health providers, delivering a victory for religious-liberty advocates.

In May 2021, the administration announced that it would reinterpret Section 1557 of the Affordable Care Act (Obamacare) and Title IX sex discrimination language to encompass sexual orientation and gender identity, ostensibly in response to the U.S. Supreme Court’s Bostock v. Clayton County, which declared that the Civil Rights Act of 1964’s references to biological sex also includes those categories.

This rule change, which would also force physicians and medical institutions to commit abortions, has sparked lawsuits over forcing religious employers to violate their consciences, both by making them complicit in the ending of human life and in “gender-affirmation” and “transition” treatments which mentally, surgically, or chemically affirm a patient’s gender confusion, against the employers’ convictions.

On August 26, the Fifth Circuit Court of Appeals blocked the mandate “permanently enjoining [the U.S. Department of Health & Human Services (HHS)] from requiring Franciscan Alliance [one of the multiple Christian medical groups suing] to perform gender-reassignment surgeries or abortions in violation of its sincerely held religious beliefs.”

This week, Catholic News Agency reported that the administration had until November 25 to appeal the ruling, and because it failed to do so the Fifth Circuit’s ruling is now the final word in Franciscan’s case (though other suits in other jurisdictions are still pending).

“The final demise of this unconscionable mandate is a major victory for conscience rights and compassionate medical care in America,” said Luke Goodrich, vice president and senior counsel for the religious liberty firm Becket Law. “Thousands of doctors will be able to do their jobs without the government requiring them to perform harmful, irreversible procedures against their conscience and medical expertise.”

President Joe Biden’s administration has made satisfying the abortion and LGBT lobbies a high priority.

In June, it issued an executive order directing federal departments to “promote expanded access to gender-affirming care,” including measures against counseling for unwanted gender confusion or same-sex attraction and state policies to protect children from life-altering surgical and chemical procedures.

It has also endorsed transitioning minors as a “best practice”; condemned states for taking action against sexual proselytization in schools and forcing girls to share sex-specific programs and facilities with men; established a White House Gender Policy Council; reversed the Trump administration’s ban on gender dysphoria in the military; and celebrated LGBT “pride” across federal agencies.

The White House has also advocated writing a “right” to abortion into federal law, as well as promoted taxpayer funding of abortion at home and abroad.