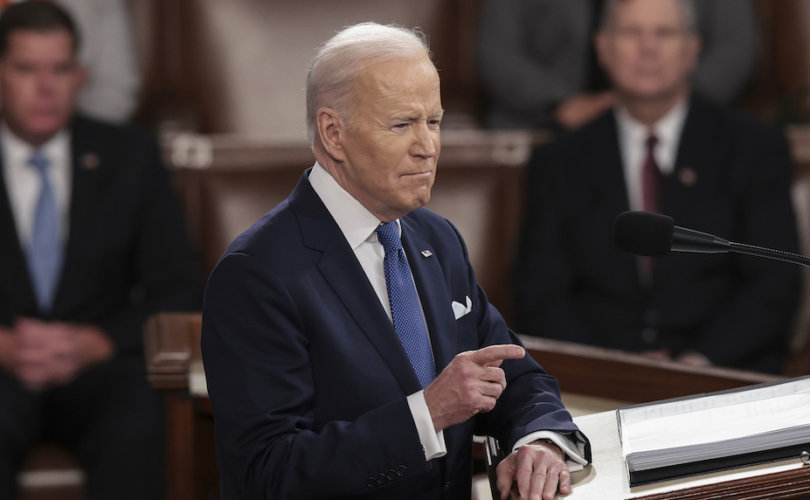 In a White House statement Wednesday, Joe Biden unveiled a list of steps that the U.S. Department of Health and Human Services (HHS) is taking to counter Abbott’s order, which declared that “gender transition” practices constitute child abuse under state law.

“Because the Texas Department of Family and Protective Services is responsible for protecting children from abuse,” Abbott wrote in his directive,  “I hereby direct your agency to conduct a prompt and thorough investigation of any reported instances of these abusive procedures in the State of Texas.”

“This is government overreach at its worst,” said Biden, whose administration is currently fighting in court to force doctors to perform “sex change” surgeries against their conscience. He added that his administration was “putting the state of Texas on notice.” The self-professed Catholic also described “affirming a transgender child’s identity” as “one of the best things a parent, teacher, or doctor can do” and said that so-called “transgender children” “are made in the image of God.”

Biden’s statement linked to a separate announcement from HHS Secretary Xavier Becerra threatening health care providers that the Biden administration could strip them of federal funding if they report parents who pursue transgender procedures for their kids. “HHS will take immediate action if needed,” Becerra said.

“HHS is closely monitoring the situation in Texas,” he continued, adding that he has directed “all of HHS to explore all options” to push back against Abbott’s directive.

Guidance released by the agency Wednesday claimed that federally-funded providers may violate federal law if they restrict “gender transition” drugs or surgeries based on an individual’s “gender identity.”

The non-binding guidance cited Section 1557 of the Affordable Care Act (ACA), which prohibits discrimination on the basis of sex. Biden’s HHS announced last year that it will enforce Section 1557 to include “gender identity” and sexual orientation, though the move has been repeatedly blocked in court and is subject to ongoing litigation.

Reporting a parent to Texas child protective service for “transitioning” a child “may constitute a violation of Section 1557 if the doctor or facility receives federal financial assistance,” the guidance said. “Restricting a health care provider’s ability to provide or prescribe such care may also violate Section 1557.”

And Becerra added that HHS sent a memorandum to child protective agencies across the country saying that “states should use their child welfare systems to advance safety and support for LGBTQI+ youth,” which he stressed could include “gender-affirming” procedures. HHS released additional guidance on patient privacy rights, telling health care providers that they are not required by federal law to disclose patient information about transgender drugs or surgeries.

Biden previously directed the Department of Justice to sabotage Texas’ fetal heartbeat law that bans abortion at around six weeks of pregnancy. Despite multiple legal challenges from the Biden administration, the law remains in effect after six months.

There have been no clinical trials on the use of puberty blockers, cross-sex hormones, or other transgender procedures in minors with gender dysphoria, and the Food and Drug Administration (FDA) has never approved medical treatments for the condition. Transgender hormone drugs and surgeries have also been linked to a host of serious and life-threatening side effects, including sterilization, heart attack, increased risk of stroke and cancer, thrombosis, and psychological problems.

As The Becket Fund for Religious Liberty has noted, the federal government does not require military doctors to perform “gender transition” procedures and has not mandated coverage of “sex change” surgeries in Medicare or Medicaid. HHS officials who oversee those programs “do not believe research demonstrates that gender reassignment surgery improves health outcomes,” the religious liberty law firm said.

The Roman Catholic Church, of which Biden professes to be a member, upholds the biological reality that there are only two genders and that God creates every human being either male or female. “By creating the human being man and woman, God gives personal dignity equally to the one and the other. Each of them, man and woman, should acknowledge and accept his sexual identity,” states the authoritative Catechism of the Catholic Church.

The United States Conference of Catholic Bishops (USCCB) has also explicitly denounced exposing minors to “sex change” procedures. “Children especially are harmed when they are told that they can ‘change’ their sex or, further, given hormones that will affect their development and possibly render them infertile as adults,” read a 2017 letter signed by the USCCB.