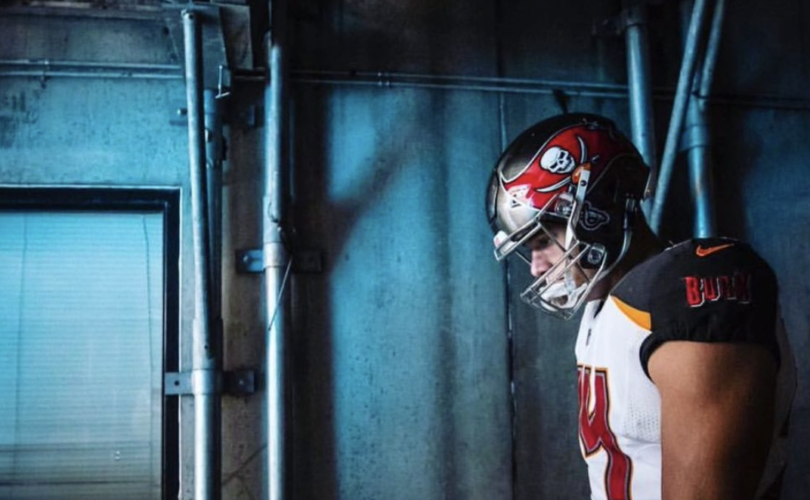 June 24, 2021 (LifeSiteNews) — President Joe Biden has praised a young NFL player who came out as homosexual this week, while the NFL has donated $100,000 to an LGBT charity in his honor.

Carl Nassib of the Las Vegas Raiders made his announcement via social media, making him the first active NFL player to admit to homosexuality.  His short video has now received over 700,000 “likes.”

“I’m gay. I’ve been meaning to do this for a while now, but I finally feel comfortable enough to get it off my chest,” said Nassib. “I just think that representation and visibility are so important. I actually hope that one day videos like this and the whole coming-out process are just not necessary. But until then, I’m going to do my best and do my part to cultivate a culture that’s accepting, that’s compassionate.”

Nassib also announced he was donating $100,000 to the pro-LBGT Trevor Project — a gesture the NFL was quick to match, demonstrating the organization’s social justice acumen.

We stand beside you, Carl.

Join us by contributing to the @TrevorProject and all it does for LGBTQ+ youth: https://t.co/J8Q22Lyeu7 pic.twitter.com/TI51FbQPaL

“Because of you, countless kids around the world are seeing themselves in a new light today,” commented Joe Biden on his official Twitter account.

To Carl Nassib and Kumi Yokoyama – two prominent, inspiring athletes who came out this week: I’m so proud of your courage. Because of you, countless kids around the world are seeing themselves in a new light today.

Both the NFL and the Biden White House currently display their fealty and obeisance to LGBT “pride,” i.e., one of many facets of Cultural Marxism, in the banners of their Twitter accounts:

“The NFL family is proud of Carl for courageously sharing his truth today,” gushed NFL Commissioner Roger Goodell in a statement.

“June is LGBT Pride Month and Nassib has made a monumental statement amidst it,” trumpeted an NFL.com story.

The Washington Times called Nassib’s announcement a “watershed moment for NFL years in the making,” yet what is forgotten is that 35 years earlier, another homosexual NFL player made headlines for “coming out.”  He was dying of AIDS.

“I want people to know what I’ve been through and how terrible this disease is,” Smith told the Washington Post while lying in a hospital bed. “Maybe it will help people understand. Maybe it will help with development in research. Maybe something positive will come out of this.”

Smith died in October 1986, a few years after his retirement from professional football.  He was just 43 years old.