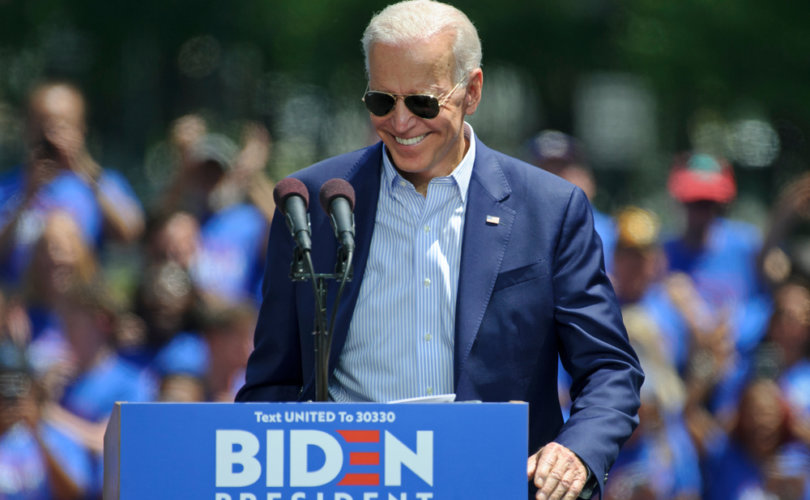 GREENVILLE, Delaware, November 3, 2020 (LifeSiteNews) — If mainstream media declares Joe Biden the winner of tonight’s election, “he plans to address the nation as its new leader, even if President Trump continues to fight in court,” Axios reports.

It is normally customary for winners of elections to wait to celebrate victory until after their opponent has conceded the race. Therefore, this leak from Biden “advisors” seems to indicate an expectation of contested results.

Jen O'Malley Dillon, Biden’s campaign manager, affirmed their camp expects as much as well stating, “We're not really concerned about what Donald Trump says. … We're going to use our data, our understanding of where this is headed, and make sure that the vice president is addressing the American people.”

Biden’s Tuesday night schedule includes, as the report indicates, “a clue to this posture,” slating the former vice president to “address the nation on Election Night in Wilmington, Delaware.”

“So if Biden is declared the winner,” the report continues, “he'll begin forming his government and looking presidential — and won't yield to doubts Trump might try to sow.”

These comments from the Biden camp come immediately after big tech social media giants have moved to shut down any reporting of election results which contradict an “authoritative” mainstream media pronouncement.

As NBC reported, these moves by the big tech companies were intended to suppress “a new generation of polling experts and election watchers” who, through the advent of the internet, have access to local election information around the nation, “some of whom started out as hobbyists before turning pro.”

The story quotes Claire Wardle, U.S. director of First Draft News, a left-leaning organization with a goal of fighting “misinformation,” which has also “partnered with NBC News.”

Like the Biden campaign, Ms. Wardle too seems to expect a contested election stating, “Nobody is ready for the scale of what we're going to see on election night.” The story reports that she “fears ‘chaos agents,’ as well as political hobbyist,” will “help shape public perceptions of the outcome.”

A particular concern worthy of mention for the NBC piece, was that President Trump may claim the election was “rigged,” and his supporters, with “a sizable online network,” are “poised to amplify any (such) claims.”

In order to combat such a significant threat, as free speech from the President of the United States, Twitter’s new policy states, “People on Twitter, including candidates for office, may not claim an election win before it is authoritatively called.”

Authoritative sources, for the Democrat-dominated company, include “an announcement from state election officials, or a public projection from at least two authoritative, national news outlets that make independent election calls.”

Thus, it would seem, that according to Twitter’s new censorship policy, the naming of the winner of the presidential election is in the hands of “at least two … national news outlets,” who have lost the trust of a large majority of Americans, particularly supporters of President Trump.

As is evident from media collusion in the “Russia hoax,” and the impeachment hoax, not to mention the alarm about the enormous power of Big Tech companies over discourse in the public square and their resulting interference in the election process, the loss of trust of Americans in these organizations is very well justified.

“Why are they doing it,” Carlson continued. “Well, because these people are not your allies. They're not trying to help you or inform you. Just the opposite. These people are your enemies. They are misleading you so that you will obey.”

Should such a speech take place, Axios reports, Americans can expect “Biden to embrace science, and talk up the role of Dr. Anthony Fauci,” who has advocated for a prolongation of “public-health measures,” including mask mandates “into 2022.”