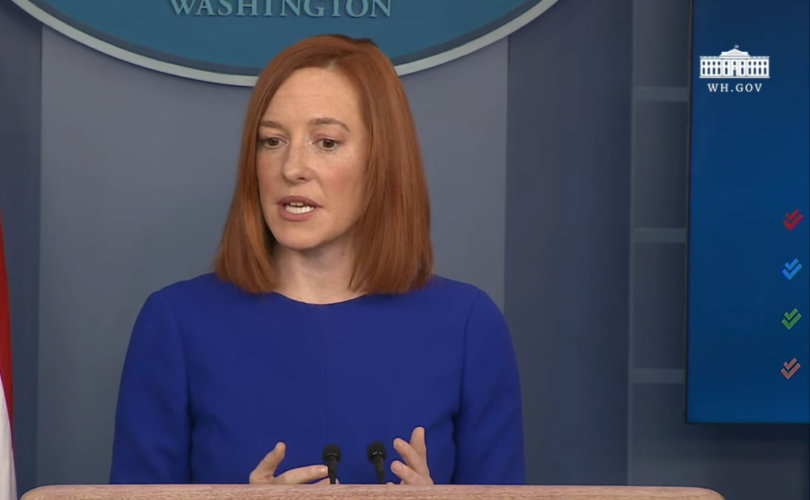 Fox News reported that as Biden was taking office, around 150 rioters in Portland attacked buildings, spray-painted graffiti, and marched under banners saying, “We don’t want Biden – we want revenge for police murders, imperialist wars, and fascist massacres.” Another banner read, “We are ungovernable.” The mainstream media continued in the now familiar depiction of the events, terming them “largely peaceful,” before describing how rioters had smashed windows and set dumpsters on fire.

In a January 22 press conference, Psaki was questioned about the recent surge in violence, as rioters continued to light fires and smash windows through inauguration day: “Does the president have any comment on the ongoing violence in Oregon and Washington State that we’ve seen in recent days?”

Psaki managed to dodge answering the question and did not mention the fact that the Democrat Party headquarters in Portland had been attacked by rioters. “Well, certainly, we had our team on the ground, our national security team, even before 12:01, early in the morning on Inauguration Day because we wanted to be able to monitor events happening across the country and any unrest that was resulting from the last couple of weeks,” Psaki replied.

“I haven’t spoke with (Biden) specifically about those events, but it is something our national security team, Liz Sherwood-Randall, is closely monitoring, of course, but if we have an additional update, I’m happy to provide it to you.”

On January 26, Psaki faced a similar question when asked if the Director of National Intelligence would classify the rioters in Portland as domestic terrorists, just as the Capitol protesters had been so described. “The riots in Portland, and the violence in Portland recently, there was some discussion earlier about the January 6 rioters being reviewed by the DNI as domestic, violent extremists. Are the rioters in Portland also being viewed through the same lens or is that something different as the White House sees it?”

Once again, Biden’s press secretary did not address the issue, referring instead to a previous answer she had given: “I think you and I talked about this yesterday and conveyed that all violence happening around the country will be reviewed as a part of the tasking that was done by that national security team, but I don’t have anything to preview on it.”

Only on January 25 did she make some sort of condemnation of violence, although without being specific. Instead of naming organizations, or pointing to the riots in the Northwest, she simply commented that Biden “condemns violence” in the “strongest possible terms,” and that “smashing windows is not protesting, and neither is looting.”

While Biden spoke of a triumph of democracy and the “cry for racial justice” in his inauguration speech, the Antifa rioters did not seem to be appeased by his words, with one rioter in Portland saying, “We wanted to symbolize that both parties are the oppressor.”

The failure of both Biden and Psaki to explicitly condemn the Antifa and Black Lives Matter rioters is in stark contrast to Biden’s swift condemnation of the protestors at the Capitol.

In a tweet the day after the January 6 protests, Biden wrote, “What we witnessed yesterday was not dissent — it was disorder. They weren’t protesters — they were rioters, insurrectionists, and domestic terrorists.”

While the vast majority of the hundreds of thousands of people had gathered peacefully to support former President Trump, a smaller number of them pushed over police barricades and entered the Capitol building. One woman was fatally shot by police, several others died or were hurt, including more than a dozen police officers.

Since the dust has settled on events at the Capitol that day, the official timeline contradicts the Democrats’ narrative that Trump incited a violent riot.

In a speech at the Ellipse ahead of the Capitol riot, Trump told protesters “to peacefully and patriotically make your voices heard.” Trump’s speech lasted from around midday until 1:11 p.m., but official reports say that protesters had already arrived at the Capitol Building by 12:40 p.m., making it unlikely that anyone listening to the speech was able to be “incited to violence” by Trump at the same time as being among the rioters in the Capitol.

Despite this, the Department of Homeland Security (DHS) has since issued a warning about “Domestic Violent Extremists (DVEs)” who seek to suppress “First Amendment-protected, non-violent protest activity.” According to the statement, and in a clear attempt to smear conservatives and Trump supporters, domestic extremists are said to be “motivated by a range of issues, including anger over COVID-19 restrictions, the 2020 election results, and police use of force.” The DHS claims that such individuals are responsible for “attacks against government facilities.”

Biden also used his inauguration speech to make a similar attack upon Trump supporters, characterizing them as a “riotous mob” and repeatedly calling for “unity” in the face of “anger, resentment and hatred, extremism, lawlessness, violence, disease, joblessness and hopelessness.”