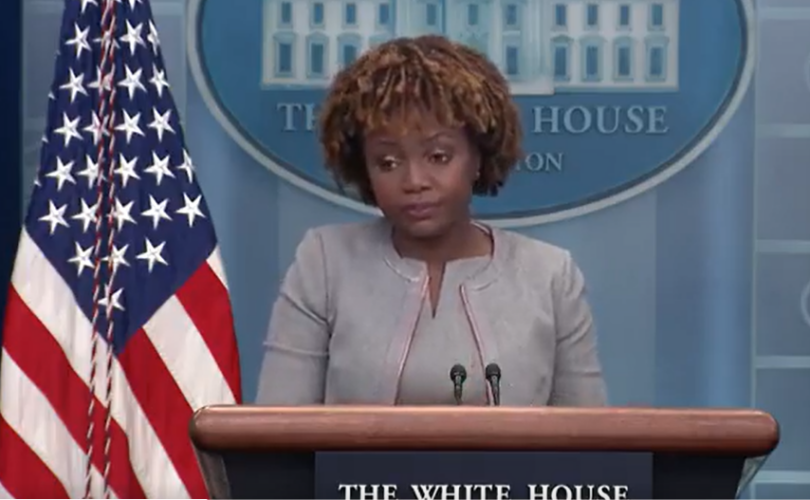 Reporter: “There’s a perception pro-life activists were being persecuted while pregnancy centers are being attacked.”

The reporter continued, “There’s a perception that pro-life activists are being persecuted and in the meantime pro-life pregnancy centers are being attacked.”

“That is just not something I’m going to comment from here about what the former president said,” she said, refusing to address the question of a general “perception,” not just on the part of Trump, that pro-lifers are being “persecuted.”

Digital strategist Greg Price observed in response to the exchange that “(a) total of 26 pro-lifers have been charged so far this year by the DOJ for peaceful protests outside abortion clinics,” and “the amount of people charged for firebombing pregnancy centers” has been zero.

Radical pro-abortion activists have committed dozens of illegal acts against pro-life pregnancy centers since the reversal of Roe v. Wade this year, including vandalism and firebombing, with at least 18 of these openly committed by the extremist group Jane’s Revenge. No charges or arrests have been made, however, against these groups.

By contrast, the pro-life activists targeted this year by the DOJ and charged with violations of the Freedom of Access to Clinic Entrances (FACE) Act have engaged in peaceful protests.

The FACE Act “makes it a federal crime to use force, the threat of force, or physical obstruction to prevent individuals from obtaining or providing” so-called “reproductive health care services.” According to the National Abortion Federation, “trespassing” constitutes a violation of the FACE Act.

Eleven of the pro-life activists charged with FACE Act violations, including an 87-year-old concentration camp survivor, were involved in a peaceful 2021 pro-life rescue at a Nashville, Tennessee abortion facility, which has since been forced to stop committing abortions to comply with current state law.

Local news outlet The Wilson Post reported March 5, 2021 that the so-called “blockade” of pro-lifers consisted of roughly 22 people, including children, “who entered the facility, sat down and refused to leave.”

The accused face up to 11 years in prison and three years of supervised release if convicted.

Fox News host Tucker Carlson has blasted the Biden administration’s DOJ for its double standard, as the arrested pro-lifers face longer prison sentences than criminals who burned down buildings.

Among those charged with FACE Act violations this year are pro-life activists Mark Houck and Paul Vaughn, who were subject to armed FBI home raids while at home with their families. The incidents have since been widely decried as an excessive and abusive overreach of force by the FBI and DOJ.

On October 31, the Crime Prevention Research Center (CPRC) released a list of cases outlining violence against both pro-life and pro-abortion groups across the United States, showing that pro-lifers experienced threats and violence in far greater numbers than pro-abortion individuals.