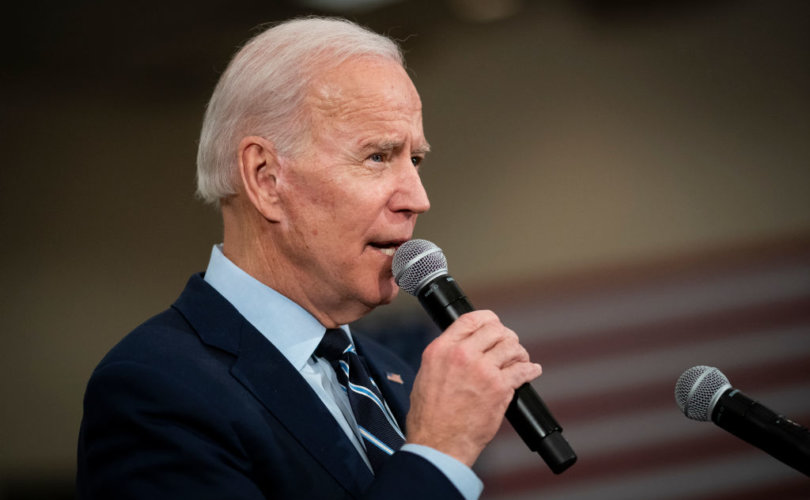 Biden’s proposal is a continuation of policies straight out of the Obama White House that aggressively sought to nudge Americans toward accepting ever-increasing government involvement in their private lives.

With the introduction of its Julia website, the Obama administration demonstrated how a person could be wholly government dependent, from birth until death. The site was short-lived as Americans recoiled from its premise, with even very liberal CNN calling it the “Wrong vision for America.”

The Biden campaign proposes to double federal funding for a program that was founded as part of the “Affordable Care Act,” better known as “Obamacare.”

Families may receive coaching on preventive health and prenatal practices, learn how to care for their babies and about important child development milestones and behaviors, receive breastfeeding support, get connected to employment and child care, and receive general support in navigating the often-stressful early stages of parenthood.

Home visiting has been found to improve school readiness, maternal, and child health, and reduce child maltreatment. President Biden will double funding for home visiting so more families benefit from this program every year.

‘The government does not trust us to raise our own children’

Some authorities have warned that such measures are fraught with potential peril from government bureaucracies that do not trust parents to raise their own children without the government’s invasive guidance.

Those concerns are heightened now that some jurisdictions have already moved to deny parental authority when a child, claiming to be “transgender,” seeks to undergo sex-change medical treatments and procedures.

The measure, which took effect on September 29, 2019, elicited great excitement among progressives and statists while sending chills down the spines of parents and families who feared increased government interference in their private lives.

The language of the bill – now law – had some concerned that these “universal” visits could become mandatory, even though state authorities denied it.

“(Are) universal home visits possibly just another way for the State to collect funds, and to potentially remove children from their homes and place them into the lucrative foster care and adoption system?” asked an essay in Health Impact News.

“Apparently, the state of Oregon is concerned that some parents are raising their children without the watchful eye of Big Brother monitoring their every move – a big no-no in the view of the progressive left,” opined Paula Bolyard.

“It's frightening to think about what would happen to parents who refuse such visits,” noted Bolyard. She added:

As someone who has been involved in the homeschooling movement for more than 20 years, I have seen many attempts to increase the oversight of children taught at home by requiring home visits by a teacher or social worker. The basic premise behind these attempted power grabs is that parents cannot be trusted with the care of their own children — that an agent of the state is the only one qualified to ensure that children are being properly cared for. Without such surveillance, proponents argue, children are at risk for abuse and neglect, something they believe government agents can prevent, despite volumes of evidence to the contrary. In Oregon, in fact, children in the foster care system are abused at twice the national rate. One wonders how a state that can't handle the children currently in its care could possibly manage to surveil an additional 40,000 children per year, let alone pay for such a program (answer: it can't).

Bolyard said the home visits aren’t just about the health of the newborns, and that the state’s representative would also be observing and making judgements about the parents.

“Government agents monitoring the homes of law-abiding parents who have not been accused of a crime without a warrant is an unconscionable violation not only of parental rights and individual liberty but also a trampling of the Fourth Amendment and the Due Process Clause of the Constitution,” warned Bolyard in her PJ Media commentary.

“The bottom line is that the statists pushing these policies do not trust us with our own children,” concluded Bolyard. “It's not enough for them to have their hooks in them 180 days a year, feeding them propaganda from the first day of kindergarten through the end of high school. They now want access to them from the day they are born — and they will succeed if parents don't rise up and tell the government nannies to back off.”

Last fall, Scotland scrapped a plan first proposed in 2014 that would have directed the government to appoint a state official, referred to as a “named person,” for every Scottish child from birth to age 18, regardless of the child’s or the family’s perceived need for public intervention.

The “named person” – who could be a teacher, school administrator, social worker or someone else – was to be assigned in order to watch over all children in Scotland 18 years old and younger, receiving information from doctors, social agencies, schools, courts, and the children themselves without parental knowledge.

In order to promote the plan, the Scottish government imitated the Obama administration’s “Julia” scheme and promoted its “Getting it right” campaign, telling the story of “Cameron,” a child whose Named Person brought him to the attention of social workers over concerns about his “social and emotional development.” In the end, Cameron was put under the supervision of a “Lead Professional” and a “multi-agency plan was agreed.”

While the government had insisted that the bill is nothing more than a way to make public services more available and efficient, it had come under heavy criticism from legal experts who said it was a grave violation of the legally guaranteed human rights of parents and families.