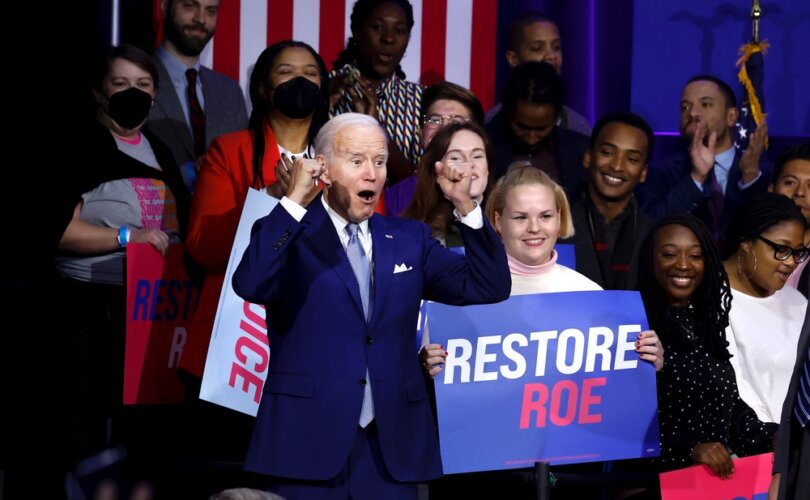 U.S. President Joe Biden waves to the crowd as he departs from a Democratic National Committee event at the Howard Theatre on October 18, 2022 in Washington, DC. Photo by Anna Moneymaker/Getty Images

WASHINGTON, D.C. (LifeSiteNews) — U.S. President Joe Biden, a self-professed Catholic, once again used the promise of unrestricted legal abortion to rally his base Tuesday, saying he will prioritize the codification of Roe v. Wade if Democrats maintain control of the House and voters elect more Democrat senators in the 2022 midterm elections.

“The court got Roe right nearly 50 years ago and I believe the Congress should codify Roe, once and for all,” Biden told supporters during a Democratic National Committee event at the Howard Theatre in Washington, D.C.

“If we do that, here’s the promise I make to you and the American people: The first bill I will send to the Congress will be to codify Roe v. Wade,” the president pledged. “And when Congress passes it, I’ll sign it in January, 50 years after Roe was first decided [to be] the law of the land.”

President Biden vowed that if voters elect more Democratic senators and keep the House, he’ll send a bill to Congress to codify abortion protections into law.https://t.co/iEmaeZgVOY

Decided in 1973, Roe v. Wade had created a federal “right to abortion” throughout all 50 states.

In June 2022, the U.S. Supreme Court handed down its landmark decision in Dobbs v. Jackson Women’s Health Organization, returning the right to regulate abortion back to the states by overturning both Roe and Planned Parenthood v. Casey (1992).

Biden’s Tuesday promise is not new for the radically pro-abortion president.

In 2019, the then-presidential hopeful unveiled a health care plan that would expand Obamacare and codify unrestricted abortion on the taxpayer dime. On the 2020 campaign trail, with the pro-life movement steadily gaining strength, Biden again promised he would support the codification of Roe.

Following the leaked draft of the Dobbs decision in May 2022, Biden ramped up calls to federally codify unrestricted abortion, even endorsing the abolition of the filibuster in a bid to cram down federal abortion law on the states.

“I feel extremely strongly that I’m going to do everything in my power, which I legally can do in terms of executive orders, as well as push the Congress and the public,” Biden said.

After the rollback of Roe, the president signed an executive order aimed at expanding abortion access in the U.S. The order stopped short at declaring a public health emergency or greenlighting abortion facilities on federal land, CNN noted, leaving abortion advocates dissatisfied.

Lacking sufficient Democrat support in Congress, the Biden administration has been unable to undo the effects of the Supreme Court’s monumental Dobbs decision. In February, The Women’s Health Protection Act to codify Roe failed by a 48-46 margin. In May, the same measure was voted down 51-49.

The Biden administration has also been unable to stem the tide of statewide pro-life laws that have taken effect after the rollback of Roe. To date, 13 states have effectively outlawed abortion statewide, and others have implemented provisions providing some defense of the preborn.

READ: Most abortions are banned in 13 states, more states to follow

Meanwhile, as the U.S. heads into a challenging midterm election this year, Democrats will need to keep control of the U.S. House of Representatives and gain a majority in the Senate if they want to be in a position to enshrine the “right to abortion” into federal law.

Polls suggest they are unlikely to do so, however, as voters continue to express disapproval of left-wing policies on a range of key priorities, including inflation, crime, and national security. Moreover, despite efforts to gin up outrage against pro-life legislation, abortion fails to top the list among voters’ primary concerns.

A recent Gallup poll found that “poor leadership” in the government ranked as respondents’ chief concern, followed by the high cost of living and inflation. Abortion fell much further down on the list, with only 4% of respondents regarding it as an important issue facing the country.