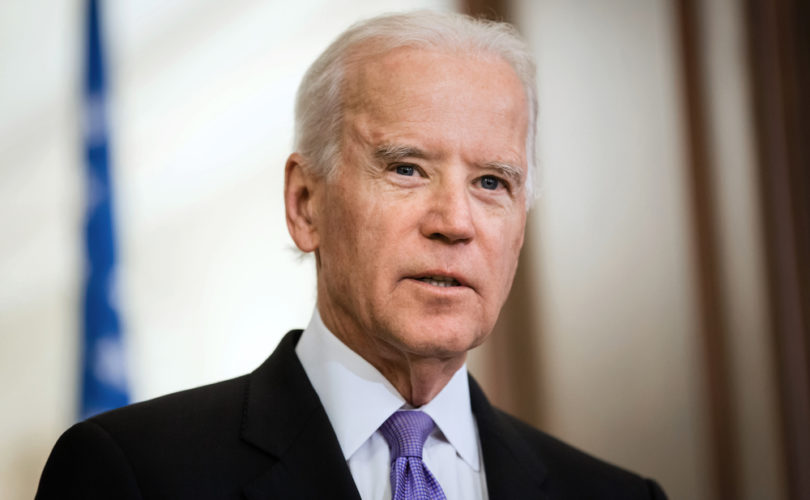 June 6, 2019 (LifeSiteNews) – Former Vice President and 2020 Democrat presidential candidate Joe Biden found himself in hot water with the abortion lobby this week after suggesting that he supports restricting taxpayer abortion funding via the Hyde Amendment while leaving the door open to abandoning it should the primary competition demand it.

The Hyde Amendment is the language added to federal budgets every year that forbids most taxpayer dollars from directly funding abortions, except in cases of rape, incest, or to save a mother’s life. While most Democrats grudgingly accept its yearly renewal and instead focus their efforts on defending federal funding to Planned Parenthood (through which taxes indirectly fund abortions), pro-abortion activists have long dreamed of completely eliminating limits to abortion funding.

Last month, the left-wing American Civil Liberties Union (ACLU) promoted a video in which Biden answered “yes” and “it can’t stay” in response to an activist asking if he would “commit to abolishing the Hyde amendment”:

Our volunteer Nina asked Joe Biden whether, as president, he would lift the Hyde amendment, which bans federal insurance coverage of abortion.

This week, the Biden campaign clarified that the former vice president “has not at this point changed his position on the Hyde Amendment,” HuffPost reported. It claimed Biden “misheard” the question and thought he was being asked about the Mexico City Policy, the ban on foreign abortion subsidies that presidents of opposing parties traditionally reverse their predecessors’ position on upon taking office.

However, the statement also hinted that Biden might reverse his position, presumably to remain competitive with other primary candidates who are currently working to stake out the most pro-abortion stance possible. “Given the current draconian attempts to limit access to abortion, if avenues for women to access their protected rights under Roe v. Wade are closed, he would be open to repeal,” the campaign said.

Planned Parenthood CEO Leana Wen and pro-abortion lobbying group NARAL condemned Biden for sticking to what had been the default Democrat position under recent Democrat presidents:

There’s NO political or ideological excuse for @JoeBiden’s support for the Hyde Amendment, which translates into discrimination against poor women and women of color plain and simple. His position further endangers people already facing enormous hurdles. https://t.co/3jDleIq077

Several Democrat senators vying for the 2020 nod also hit Biden, Vice News reported. Elizabeth Warren said he was wrong, Kirsten Gillibrand called repealing Hyde “critical” to “low-income women in particular,” Bernie Sanders declared there was “no middle ground” on the issue, and Kamala Harris reiterated that “we must repeal the Hyde Amendment.”

That’s not to say Biden is an abortion moderate, however. By the mid-2000s, Sen. Biden generally voted in lockstep with Planned Parenthood and NARAL. As former President Barack Obama’s running mate, Biden spent eight years in what was arguably the most pro-abortion administration in American history, during which he told a Chinese audience he “fully understand(s)” and was “not second-guessing” the country’s practice of forcing families into abortion and sterilization.

Biden, who claims to be an observant Catholic, said in 2015 that he was “prepared to accept as a matter of faith” that “at the moment of conception there's human life and being,” but wasn’t prepared to “impose” a “rigid” or “precise” view on abortion that was “born out of my faith” (ignoring that science is equally conclusive on when life begins).

Last month, Biden endorsed the idea of legislatively codifying Roe in federal law, which would effectively ban states from enacting pro-life laws regardless of whether the U.S. Supreme Court ever overturns the 1973 ruling.