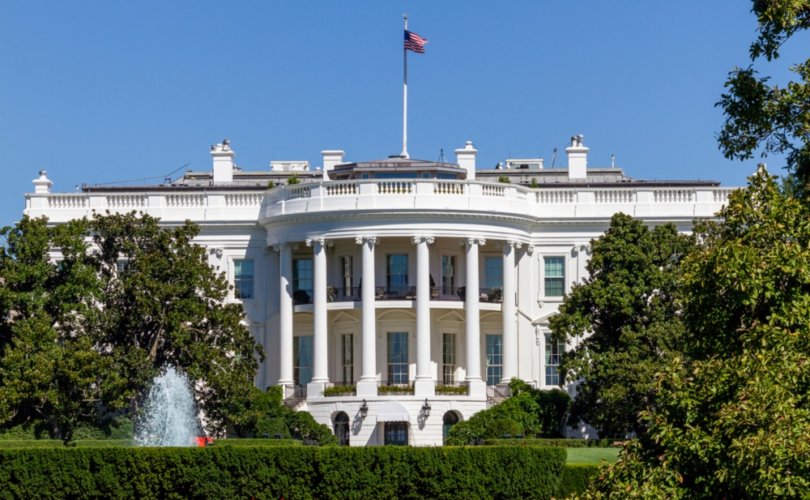 By The Sturdy Table / Shutterstock.com

WASHINGTON, D.C., January 25, 2021 (LifeSiteNews) — As is customary upon taking office, President Joe Biden has placed his mark on the Oval Office, decorating the room with artwork representing various historical figures. Among the most notable changes is the addition of a framed image of Biden meeting Pope Francis, nestled among pictures of his family, and the removal of the military flags that Trump had standing behind the Resolute Desk. Biden replaced those flags with the American flag and a flag emblazoned with the presidential seal.

Biden’s picture with the Pope is afforded a prominent place, being situated directly behind where the president sits. This means that the picture is visible to cameras any time the president is pictured or filmed at the Resolute Desk. Despite this effort to emphasize Biden’s relationship with the Catholic faith he purports to devoutly follow, no crucifix or image of Christ is reported to hang in the Oval Office.

Pope Francis, who consistently railed against former president Donald Trump for the border wall with Mexico, comparing it to the Berlin Wall, has no such consternation regarding “devout Catholic” Biden. Instead, Francis has entertained Biden at the Vatican and, according to Biden, has even given the ardent abortion supporter Holy Communion. Speaking after being denied Communion in 2019 by a priest in South Carolina, Biden said: “It’s not a position that I’ve found anywhere else, including from the Holy Father, who gives me Communion.”

Sitting to the left of his picture with Pope Francis, directly behind the Resolute Desk, is a bust of socialist Cesar Chávez. He was the leader of the United Farm Workers union in the 1960s, an association that organized strikes and boycotts to leverage better working conditions for farmers. During a 1972 interview, Chávez, explaining the need for boycotts, said, “As long as we have a poor country bordering California, it’s going to be very difficult to win strikes.” He opposed illegal immigration over the Mexican border.

The Washington Post reported that Biden placed, as the focal point opposite his desk, a portrait of Democratic president Franklin D. Roosevelt, above the fireplace. Around the portrait are paintings of Thomas Jefferson, Alexander Hamilton, George Washington, and Abraham Lincoln. Biden’s office said the paintings stand as “hallmarks of how differences of opinion, expressed within the guardrails of the Republic, are essential to democracy.” A bust of Roosevelt’s wife, Eleanor, is also situated in the office.

Washington and Jefferson both owned slaves. For this reason, leftists have spent the better part of the past several years campaigning, often through vandalism and violence, for the removal of statues of them from public spaces.

Other notable changes include the removal of a bust of British World War II prime minister Winston Churchill. The bust was originally given to George W. Bush by then–prime minister Tony Blair. Former president Barack Obama removed the Churchill bust, returning it to the British, only for his successor, Donald Trump, to install it once again following a friendly meeting with former prime minister Theresa May.

When Obama was asked in 2016 why he had removed the bust of Churchill, he replied simply that “there are only so many tables where you can put busts — otherwise it starts looking a little cluttered.”

— Article continues below Petition —
THANK President Trump for all he did for Life, Faith and Freedom!
Show Petition Text
52454 have signed the petition.
Let's get to 55000!
Thank you for signing this petition!
Add your signature:
Show Petition Text

Biden had busts installed of civil rights activists Martin Luther King, Jr.; Rosa Parks; and Robert F. Kennedy. He removed the image of Andrew Jackson that Trump had hanging to the left of the Resolute Desk, replacing it with a portrait of Benjamin Franklin.

According to The Washington Post, the portrait of Franklin is “intended to represent Biden’s interest in following science.” The painting itself is positioned “near a moon rock set on a bookshelf that is intended to remind Americans of the ambition and accomplishments of earlier generations.”

Presidents always redecorate the Oval Office after transitioning into the White House. It is one way by which they tell the country, and the world, the kind of presidency they hope to have. Speaking to The Washington Post, deputy director of Oval Office operations Ashley Williams said it was “important for President Biden to walk into an Oval that looked like America and started to show the landscape of who he is going to be as president.”