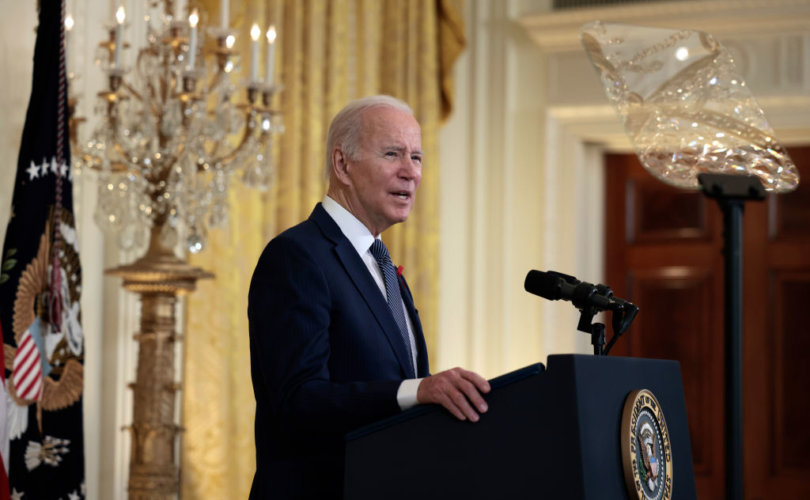 (LifeSiteNews) — President Joe Biden responded to questions about the oral arguments heard by the Supreme Court in the Dobbs v. Jackson case today reaffirming his commitment to supporting abortion.

The self-professed Catholic president told reporters, “First of all, I haven’t, I didn’t see any of the debate today, just the presentation today,” adding “I support Roe v. Wade.”

“I think it’s a rational position to take and I continue to support it,” he said.

The president made the comments in response to the beginning of oral arguments in the Dobbs v. Jackson Women’s Health Organization case, which both pro-abortion and pro-life activists anticipate as having the potential to completely overturn Court precedent establishing abortion as a “constitutional right” in all 50 states.

The Dobbs case concerns Mississippi’s HB 1510 law banning abortions from being committed past 15 weeks for any reason other than physical medical emergencies or severe fetal abnormalities.

Meanwhile, the lead counsel for upholding Roe v. Wade and Planned Parenthood v. Casey, the 1992 case with affirmed Roe’s finding of a “constitutional right” to abortion is Julie Rikelman, Litigation Director for the radically pro-abortion Center for Reproductive Rights.

This morning, thousands of pro-lifers gathered outside the Supreme Court building in Washington D.C. to advocate for the overturning of Roe v. Wade as the Court hears oral arguments in Dobbs v. Jackson, a case which has the potential to reverse the 1973 precedent which established abortion as a “constitutional right” in the United States.