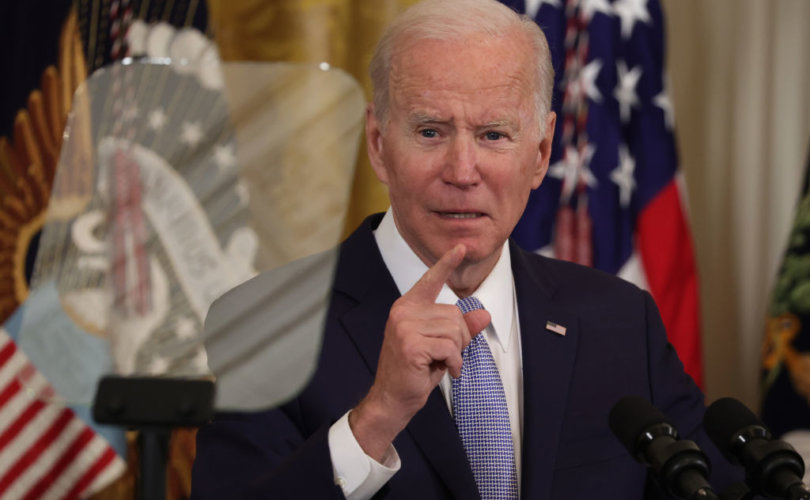 (LifeSiteNews) – In comments on the leaked Supreme Court draft opinion that would overturn Roe v. Wade if sustained, President Joe Biden claimed Wednesday morning that if the decision holds “every other decision related to the notion of privacy” would be “thrown into question.”

“If [the draft opinion] becomes the law and if what is written remains, it goes far beyond the concern of whether or not there is the right to choose,” Biden told reporters.

He suggested that a reversal of Roe would put “other basic rights” at stake, including “the right to marry,” “whether you decide to conceive a child or not,” “how you raise your child,” and “basically … all of the decisions of your private life.”

Just days ago, commentators accused Biden of suggesting that parents’ rights regarding how to raise their children stop at the door of the classroom when he told teachers that their students are “not somebody else’s children, they’re like yours when you’re in the classroom.”

Biden told reporters Wednesday morning that he believes the draft opinion fails to acknowledge “that there is a right to privacy in our Constitution,” which he “strongly” affirmed. “There can be limitations on it, but it cannot be denied,” he added during his remarks.

Biden speculated that the opinion, if held, would even impact laws regarding homosexual “marriage.”

“Does this mean that in Florida they decide they’re going to pass a law saying same-sex marriage is not permissible?” said Biden, adding, “It’s a fundamental shift in American jurisprudence.”

Biden remarked that there remains a question of when human life begins, but still believes that the Supreme Court should not rule in such a way that could allow limitations on abortion while that question, as Biden suggested, remains unanswered. The Catholic Church, of which Biden professes to be a member, teaches that life begins at conception, in line with settled science.

His phrasing, however, acknowledged that abortion kills children, as the Susan B. Anthony List has pointed out: “The idea that … no one can make the judgment to choose to abort a child based on a decision by the Supreme Court, I think goes way overboard,” Biden said.

“If this decision holds, it’s really quite a radical decision,” he added in his comments.

Biden would not clearly answer the question of whether “changes need to be made to the Supreme Court,” but concluded that he is “not prepared” to leave the question of the “right” to abortion “to the whims of the public … in local areas.”

A White House statement attributed to Biden and published Wednesday morning declares that if Roe is ultimately overturned, “it will fall on our nation’s elected officials at all levels of government to protect a woman’s right to choose. And it will fall on voters to elect pro-choice officials this November. At the federal level, we will need more pro-choice Senators and a pro-choice majority in the House to adopt legislation that codifies Roe, which I will work to pass and sign into law.”

The statement reiterates Biden’s stance that “a woman’s right to choose is fundamental, Roe has been the law of the land for almost 50 years, and basic fairness and the stability of our law demand that it not be overturned.” Notably, the statement does not claim that Roe is legally sound.

Biden also stated he has directed the Gender Policy Council and White House Counsel’s Office “to prepare options for an Administration response to the continued attack on abortion and reproductive rights, under a variety of possible outcomes in the cases pending before the Supreme Court,” but does not elaborate on those options.

In both his written statement and oral remarks this morning, Biden has failed to mention or condemn the leak itself, which many commentators have called an improper attempt to influence the decision and an attack on the trust and integrity of the Supreme Court, which should be condemned regardless of where one stands on the issue at hand.