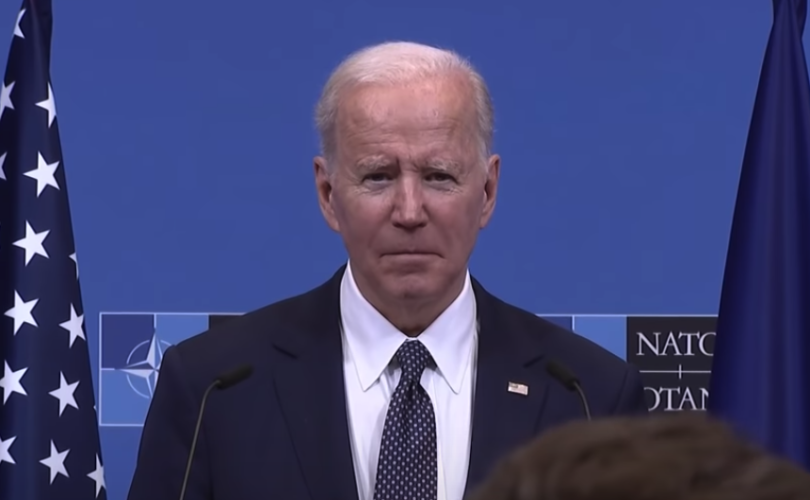 BRUSSELS (LifeSiteNews) – Joe Biden on Thursday acknowledged coming global food shortages due to the Ukraine-Russia conflict and sanctions imposed by the West on Russia and said the shortages will impact the United States.

“Because Russia and Ukraine have been the breadbasket of Europe in terms of wheat, for example, just to give one example, but we had a long discussion in the G-7 with both the United States, which is … the third-largest producer of wheat in the world, as well as Canada, which is also a major, major producer,” he said.

The U.S. and Canada have discussed how the two countries can “increase and disseminate more rapidly foods,” Biden said, and “talked about urging all the European countries and everyone else to end trade restrictions on sending … limitations on sending food abroad.”

“And so, we are in the process of working out with our European friends what it would … take to help alleviate the concerns relative to food shortages.”

Ukraine and Russia together produce around one-third of global wheat exports and significant amounts of fertilizer and fuel, in addition to corn, rye, and other food products. Russia is the world’s largest manufacturer of fertilizer.

Sanctions imposed on Russian exports by the Biden administration and U.S. allies have sent fertilizer prices skyrocketing, according to the Washington Examiner, raising fears about food shortages across Europe. Russia temporarily suspended grain and most sugar trade with several former Soviet countries earlier this month.

And in Ukraine, farmers have said that a lack of energy, fertilizer, and other materials could result in the country’s winter wheat yields dropping by 15 percent or more, Reuters reported. Wheat prices have shot up 50 percent since February, and fertilizer costs have spiked by nearly one-third since the beginning of the year, surpassing record peaks during the 2008 food and energy crisis.

Food prices in the U.S. have already exploded in recent months under the Biden regime, in large part due to unprecedented federal spending. The Ukraine conflict and sanctions will only make price hikes worse, the New York Post reports:

The Green Markets North American Fertilizer Index, already high, jumped 16% last Friday. Urea, a major fertilizer ingredient, went up 22%. Potash, another major ingredient (Russia is the top producer), increased 34% in Brazil, the world’s leading fertilizer importer. The price for standard “starter fertilizer” 10-34-0 is up 49% from a year ago and likely to go much higher.

The issue is that farmland without fertilizer is vastly less productive. Without fertilizer, corn and wheat yields in the United States would decline by more than 40%. But as prices promise to go much higher, farmers will either have to skimp on fertilizer or raise prices of their own products a lot.

Then, too, there are skyrocketing prices for gasoline and diesel, which are essential for today’s mechanized farming and for getting food to consumers. Add these increases in cost and decreases in production to the shortages likely to come from the Ukraine invasion, and we’re looking at really dramatic increases in food prices.

White House Press Secretary Jen Psaki commented last week on the possibility of food shortages, stating at the time that they were not expected to affect Americans.

“While we’re not expecting a food shortage here at home, we do anticipate that higher energy, fertilizer, wheat, and corn prices could impact the price of growing and purchasing critical fuel supply, food supplies for countries around the world,” she said. “Ukraine is a big exporter of fertilizer. So as it relates to even that need in the United States and other parts of the world, that’s something that we’re continuing to closely assess as well.”

The United Nations’ food agency said this month that international food and feed prices could rise by 20 percent amid the war in Ukraine. Global food prices hit historic highs last month, according to the agency.